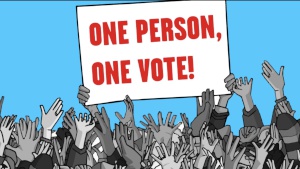 That gormlessly glum picture of Christopher Luxon in Samoa graphically tells us what kind of image New Zealand would be projecting abroad if there’s a change of government next year. The glumness is understandable. For months, National and ACT had been dog whistling to the bigots who oppose the creation of Maori wards in local government, by stressing instead the sanctity of the democratic principle of “ one person, one vote.”

Yet this week, National and ACT have tied themselves in knots trying to justify why the estimated 13,000 members of the multiple property owning classes should be allowed to cast votes in each of the council regions where they own property. To the centre right, it seems that the “one person, one vote” principle applies only to the hapless members of the proletariat who don’t happen to own several properties. Here’s National deputy leader Nicola Willis trying to defend the indefensible:

Willis:“I think the principle of one person, one vote is critically important, but what we are seeing with the issue of people who are resident in two jurisdictions is that they are not being afforded anymore vote in that jurisdiction than someone else. These are the sorts of issues I would be interested in seeing how many people are actually in that position. But my view is they’re not actually altering the proportionality of representation in that region.

And here’s National’s Chris Bishop making the same 19th century case for the propertied classes meriting a higher form of democracy. Clearly, his heart isn’t in it:

Bishop:“I think it’s legitimate that people vote in the areas that they live but also own property, because ultimately they’re paying rates on those. I think there is a legitimate public policy debate, but I think that the status quo is more than defensible and that’s the system we have and that’s what we support.”

Yep, it’s a dodgy system but it’s the one we’ve got, so he’s sticking by it. So is ACT’s Brooke van Velden:

van Velden: “The ACT Party’s point is that we always go back to one person one vote, we do believe in one person one vote, so if this is a particular area that is causing concern, we are open to looking into it but I don’t think it is the problem that it looks like, really anyone bringing this up on Twitter is just trying to deflect from the Labour Party’s problem that we actually have a cost of living crisis, crime is going through the roof… I don’t think this is a real problem.”

So it looks like a problem to ACT and; umm… van Velden believes in ‘one person one vote’ so much she’ll say it twice and; umm, ACT is open to looking into it but it’s not a real problem even if it looks like one. But hey, look over there! There’s a cost of living crisis and crime! And all of that is Labour’s fault!

Footnote: Bishop’s argument rests on the premise that the multiple property owning classes pay rates, so it’s therefore OK for them to have more than one vote in various local body elections. Even so, the “one person, several votes” outcome would seem to erode the sanctity of the “one person, one vote” proportionality principle. In any case, while landlords may be legally responsible for the rates, it is not as if most of them dig into their own pockets. Instead, multiple property owning landlords tend to build the rates (and other costs, like insurance) into the rent they charge their tenants, who get to be the ones who actually foot the rates bill.

Tenants after all, who pay rent in one location (say, while they attend university) but for whom another city counts as home, don’t get to have multiple votes. Surely, the same sort of residency requirement should apply to landlords, who can freely choose which council area is their prime (and only) area of voting interest.

For a guy still suffering from a rebound case of Covid, US President Joe Biden has had a couple of good days, regardless. The US drone strike in Kabul against Ayman al-Zawahiri killed the last prominent Al Qaeda member responsible for the September 11 attacks who was not already dead or in custody. More importantly, Biden‘s legislative package on climate change (and related matters) got kicked back into life again.

Over the past fortnight, the US climate change plan had been on life support. Want to know what sort of miserly backroom political deals are necessary to advance the survival prospects of the planet ? Well, something called the Mountain Valley Pipeline aims to transport Appalachian shale gas from West Virginia to Virginia. A new (and contradictory) bill that will sit alongside the Biden package has been devised, and it will give a green light to natural gas pipelines like Mountain Valley. As a result, the holdout Democratic senator Joe Manchin III has grudgingly agreed to stop blocking the Biden legislation, which has long been one of the key planks in the Democratic Party’s domestic agenda.

The climate change provisions are tucked into the Inflation Reduction Act. According to this summary, the Bill contains:

(a) a $369 billion package for climate change and energy security projects that will lower energy costs, increase cleaner energy production, and reduce carbon emissions by roughly 40 percent by 2030

(c) a variety of tax increases of $313 billion on corporations and high earners.

As mentioned, the passage of these measures has come to hinge on that parallel Bill that will let natural gas pipelines (like the one planned to link Virginia and West Virginia) to proceed in tandem. Clue: Manchin represents West Virginia. Now, all that the Democrats have to do is to find a similar sweetener to bring their other maverick senator – Arizona’s Kyrsten Sinema – on board.

Mind you, the current bill is now merely a shadow of the multi trillion dollar “Build Back Better” response to climate change and infrastructure renewal that Biden had in mind. Obviously though, it is better than the “nothing” that seemed inevitable only a fortnight ago, while Manchin was still holding out. For a New Zealander, the version of the Biden legislation now on the table does contain a couple of interesting ingredients.

One, it enacts a “historic deficit reduction” of $US300 billion to fight inflation. But Biden has something different in mind than the slash and burn approach of cutting taxes and public services that National and the ACT Party are advocating here. The United States at least, seems able to grasp that the social goals that need to be pursued on climate change, healthcare service provision, drug purchasing powers etc will also require additional revenue – which Biden aims to raise mainly by increasing the taxes on America’s biggest corporations and highest earners. The Biden administration has been adamant though, that there will be no new taxes on families making $400,000 or less and no new taxes on small businesses.

Contrast this pursuit of a sensible balance – tax the rich, protect the poor and the middle class – with the situation here. In this country, a wealth tax has been deemed to be politically impossible even by a centre-left Labour Party that enjoys an absolute majority in Parliament.

Also… Remember the furore here about the “ute tax”? This envisages a small tax incentive to encourage New Zealanders to cut emissions by using electric vehicles. Clearly, this is a socialist horror hatched by the ‘know nothing” tyranny resident in the Beehive. Reality check: in the citadel of capitalism, the Biden administration has not only adopted the same approach, but will be making this tax relief available only to low and middle income earners:

The other interesting thing for a New Zealander is that in an effort to reduce healthcare costs, the Medicare programme will be empowered to negotiate with drug companies on drug prices. Pharmac, which the US used to regard as state socialism, looks like it has become something of a model that the US is now willing to embrace, in order to put a lid on the demands being made by Big Pharma.

Back in 1950, Fred Hellerman of the Weavers made a plea for better understanding of the propertied class, with his “Pity the Downtrodden Landlord” song…