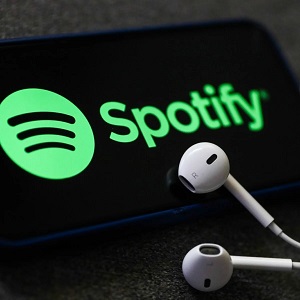 Spotify has to be one of the most interestingly futile mouse-wheels of 21st century capitalism. Run, run, run goes the Spotify mouse but it never, ever makes a profit. For reasons set out below, it maybe never will. But it won’t be for wont of trying.

Reportedly, Spotify’s music library contains 70 million tracks and it adds 60,000 more each day. By some estimates it adds on average, one new track every 1.4 seconds. (No wonder it’s so hard to keep up with new music.) Spotify has 345 million active users, and 155 million of them have been willing to pay a subscription in order to enjoy their music ad-free. Ads are not a major driver of company revenue. About 91% of Spotify’s revenues come from the less-than-half of its users who pay the subscription fee.

There are several reasons why none of this frenetic activity ends up being profitable. Of course, you may be reading this and thinking well, yeah… But didn’t they say the same thing about Amazon back when it was burning through mountains of cash in the early 2000s, and look where Jeff Bezos is today? There’s a big difference. All along, serious doubts have existed about whether Spotify’s incarnation as a music streaming platform was ever capable of turning a profit.

The flaws in that music streaming model explain why Spotify has been making such a hugely expensive diversification into podcasts over the last couple of years. It now hosts over 2.2 million podcasts. It reportedly paid $100 million for the exclusive rights to host the Joe Rogan Experience podcast. Can podcasts be the engine that finally takes Spotify to the Land of Profitability? The jury is still out on that.

Flaws in the model

Bloomberg’s Business Week magazine was raising doubts about the viability of Spoitify’s music streaming model as long ago as 2018. There’s no mystery as to why the major record companies love Spotify. In its role as a distribution channel, Spotify (and iTunes) continue to protect the music business from the threat of piracy, while collecting the royalties that deliver large and guaranteed streams of income to the record companies.

That’s the galling problem. In order to carry copyrighted music on its platform, Spotify has to pay huge amounts in royalties. In fact, some 70% of its gross earnings go straight to the record companies in royalties. That’s problematic:

In 2020, Spotify spent €1B on marketing & sales, €800M on research & development and €400M on general & administrative tasks. Deducting these operational expenses from gross profit gives an operating loss of €293M.

This situation poses unique challenges. All of Spotify’s main music streaming rivals – Apple, Amazon Prime, Tidal – can use their streaming involvement to peddle other company products. Sure, Spotify does sell its user data back to ad agencies who target ads back at the users but as mentioned, Spotify is more interested in turning those users into ad-free subscribers.

So… Rather than try to generate more revenue by raising its subscription rates significantly – which would drive even more of its users to its rivals, or back into piracy – Spotify has turned to podcasts as its possible salvation.

Before looking at its chances of success, spare a thought for the musicians who provide the music streaming platforms with the fruits of their labours. As mentioned, 70% of Spotify revenues go to the record companies, and they on-pay a fraction of that money to the artist, according to what each contract stipulates.

While the details tend to be closely kept secrets, it is no surprise that Spotify seems to be the hardest hill for artists to climb to achieve anything like a viable return. Reportedly, the amounts involved range from US$0.00029 per stream to 0.0084 per stream. According to this 2015 Guardian article about the comparative returns from plays on Spotify, Itunes and Youtube…the streaming of songs one million times on Spotify will generate roughly as much income for an artist as they would earn from selling 100of their own self-pressed CDs.

Meaning: For all but a tiny elite of superstars, Spotify is mainly a means of exposure. And as we all know from nature, too much in the way of inadequate exposure can kill you.

So it seems pretty obvious why Spotify is gambling so heavily on podcasts. Basically… If Spotify can own the podcast production studios and/or can buy exclusive rights to their output, it won’t have to pay anything like the same crippling amounts of royalties to anyone else. Plus, most podcasts are relatively cheap to make. Many of them are just people talking, often to each other.

The downsides? Well, the Joe Rogan Experience podcast for which Spotify paid so dearly did generate an initial firestorm of bad publicity. Rogan’s contrarian views may be why his largely cis-gendered male audience love him so dearly, but his platforming of anti-vaccination messages during a pandemic did serious harm to Spotify’s wider image.

Famously, Neil Young and Joni Mitchell took (almost all) of their music off Spotify in protest. Both Young and Mitchell had caught polio as children, just before the Salk and Sabin polio vaccines arrived on the scene to protect everyone from the ravages of that terrible disease. They wanted nothing to do with a Spotify that was trumpeting its exclusive hosting of the world’s most popular Covid anti-vaxxer.

To Spotify’s immense relief, relatively few other artists joined the boycott. Neil Young in particular, didn’t need Spotify. As his fans well know, Young operates his own massive website that offers a treasure trove of live recordings, album out-takes, films and other rarities to the point where the Aquarium Drunkard website has even compiled selected samplings from the Young archives. Rogan, for his part, has reportedly agreed to delete some of his more contentious back catalogue from the Spotify library.

Looking ahead, one drawback with Spotify’s new reliance on podcasts is that the furnace must always be fed with new material. Also, relatively few podcasts become major cultural events. The true crime podcast Serial was the exception that launched the genre, but none of its successors have matched its impact. These days, a mega hit podcast may attract say, three million listeners – as opposed to 15-20 million viewers for a hit television series – and obviously, this difference in scale limits the size of the audience the advertisers can hope to reach.

Also… Unlike music, there is little or no nostalgic value in podcasts. Very few people are ever likely to be kicking back in the La-Z-Boy and re-listening to the podcasts of their flaming youth. (A podcast library is not worth anything like a music library.) As Bloomberg News reported a fortnight ago:

…Despite all of Spotify’s spending on podcasting, it accounted for only 7% of total listening hours in the first quarter of 2022 and 2% of revenue last year, the company announced in June.

Currently, Spotify is living in hope that its ad revenues from podcasts will soon start to climb, just as its initial investments in production capacity begin to tail off. Dream on. Spotify has been looking to make that move into the black every year since its inception in Sweden, 16 years ago.

So here to help out with massive number of plays, is another Werewolf Spotify playlist of (mostly) very recent tracks. Starting from the back end, Beyonce’s new “Break My Soul” single has formally acknowledged its debt to the early 1990s club classic “Show Me Love” by Robin S, which has also been drawn upon by (among a raft of other examples) Charli XCX on her recent “Used To Know Me” track.

Ironically, the Swedish producer (StoneBridge) who did the initial re-mix of the hitherto obscure Robin S track that gave it immortality, doesn’t qualify for compensation from the ongoing use of his innovations. Which as the NYT says, amounted to:

He dialled his Korg M1 synthesizer to the next preset, landing on Organ 2, and replayed his bass line. [Then came] the grinding sound that opens the song, a product of his DX100 Yamaha synth, which he played in the red to distort it. He dusted it all, as well as Robin S.’s vocal, with some delay. The result was minimal like early house music out of Chicago, but shimmering with novel sounds.

FYI, I’ve put the Beyonce, Robin S and the Charli XCX singles in sequence. Otherwise, the odd ducks on this playlist are the very pretty Joan Shelley/Bill Callahan folk ballad “Amberlit Morning” and the remake of Brian Wilson’s little known “Til I Die” song, by Zooey Deschanel and M. Ward, who perform as She and Him.

The Sampa the Great track is a homage to an earlier era of Zambian music. The Shygirl, Mura Musa and Channel Tres track is a dream collaboration, while the Cryalot single works as almost a satire of Shygirl’s branch of nervy hyperpop. Crystallise the pain, people.

Finally… I’ve picked one of the less obvious cuts by Melbourne band Camp Cope, whose 2022

Running With the Hurricane

album has been an impressive act of re-invention. From shouty post punk defiance to soulful introspection is quite a shift, but they pull it off.