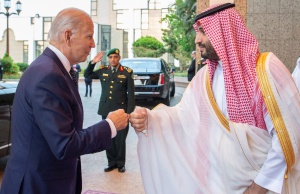 The brief fist bump between Joe Biden and Saudi Arabia’s de facto leader Mohammad bin Salman was the most memorable image from the US President’s journey last week to the Middle East. To many, it was a humiliating sign of American impotence. Fist bump the hand of the Crown Prince who ordered the 2018 murder of journalist (and US citizen) Jamal Khashoggi – a killing that Candidate Biden had claimed on the campaign trail had turned Saudi Arabia into a “pariah state”?

When President Biden tried to raise the Khashoggi murder in Riyadh last week, bin Salman reportedly hit back with the crushing rejoinder –

“You can’t impose your values on us by force. Remember Abu Ghraib? What have you done about Shireen Abu Akleh?”.

Ouch. Before and during the Israel leg of his Middle East trip, Biden had been strikingly reluctant to criticise Israel over the murder of the Palestinian journalist (and US citizen) Shireen Abu Akleh despite the evidence of her deliberate targeting by the Israeli military forces. When Biden finally did get around to talking about Abu Akleh, Biden couldn’t even get her name right. If you scroll down to 2.27 in the clip below… Yes, Biden does mangle her name into something that sounds depressingly as if the words “Abu Akleh” and “Abu al-Qaeda” were rattling around at the same time in his head:

On the same trip, Biden also managed to combine the words “horror” and “ Holocaust” into a novel tongue twister :

The Biden trip to the Middle East will probably intensify the pressure on him not to run for re-election in 2024. (The polls say that even a majority of Democrats don’t want him to run again.) As the 538 website put it recently:

What Was The Point?

After putting Biden’s poor personal performance and dismal poll ratings to one side, what was the intended purpose of this trip? Supposedly, the Saudi visit was to pressure the kingdom to boost its oil production – beyond what it did a month ago – in order to ease the global spike in oil prices resulting from Russia’s war in Ukraine.

In fact, the Americans would have known beforehand that such cooperation was extremely unlikely. Both the Saudis and the Russians belong to OPEC, and there is no obvious gain to them from lowering oil prices. In fact, the Saudis are having it both ways right now: reportedly, they are buying Russian oil at a one third discount to supply their own citizens, while creaming it from the ongoing high global prices for their own oil production.

Overall, the Middle East’s stance towards Russia is strikingly different to what one finds in Europe. Apart from Germany’s hesitancy about a boycott of Russian fossil fuels and apart from Hungary stubbornly choosing to be an outlier, Europe’s sanctions/boycott stance has been sweepingly comprehensive.

To that extent, the Biden administration has succeeded in creating a united European effort that is making Russia pay a very high price for its war. Even a New Zealand eager to secure its trade deal with the Europeans, has supported the EU/NATO push-back against Russia.

Different story in the Middle East though, where Russia (and China) have many more friends across the region. Even India has been buying Russia’s oil. The Kremlin’s friends include the Saudis, Egypt and Israel. Despite all the billions upon billions that Washington continues to pour into Israel, it has received only lukewarm support in return over its confrontation with Moscow over Ukraine. As the veteran US Middle East expert Professor Juan Cole recently pointed out:

Neither Saudi Arabia nor Israel has pledged to defend the US, and so they are not allies, unlike Turkey, which fought alongside US troops as part of NATO in Korea and again in Afghanistan. Israel has been careful not to offend Russia, only yielding to US pressure on a few minor votes at the U.N. Egypt is cozying up to Russia and China, and desperately needs Russian wheat if it is to avoid another revolution.

Nor, as Cole also cogently points out, is there much chance of the US hawks being able to forge a common front in the Middle East against Iran, on anything like the scale that NATO has mounted against Russia. The UAE for instance has recently improved its diplomatic ties with Iran. Two weeks ago, the Tehran Times reported on this development, while also noting Iraq’s role in carrying diplomatic messages back and forth between Saudi Arabia and Iran, a role that has also received Biden’s blessing. For its part, Qatar has reportedly been playing a key role in laundering Iranian funds.

Biden of course, could almost overnight resolve the American concerns about rising oil prices. If some new version of the Iran 2015 anti-nuclear deal scrapped by Donald Trump could be put back into effect, that would immediately release millions of barrels of Iranian oil onto global markets. Fuel prices would tumble, around the world. (Yes, that would be a disaster for the battle against climate change, but it would significantly ease the cost-of-living crisis, and permanently so. )

On his trip, Biden re-assured Israel that the US would never allow Iran to obtain nuclear weapons. Yet to Israel’s ongoing chagrin, Biden also affirmed the value that the US saw in continuing to engage with Iran in order to resurrect the 2015 deal in some form.

That ball however, is still firmly in the US court. To achieve an anti-nuclear deal, the US would first need to unilaterally lift the harsh economic sanctions that Trump arbitrarily imposed. Those US sanctions had nothing to do with the civilian nuclear enrichment programme, but were aimed at hurting the Iranian people, so as to stir up their resentment against the country’s leaders.

Even if Biden is serious about advancing the Iran deal – and that’s not a certainty – it seems unlikely that the White House would risk a backlash among US voters by lifting any of the economic sanctions on Iran before the US midterm elections. In the meantime, China continues to forge diplomatic, economic, and security ties with Iran, in order to rescue the mullahs from the corner into which Trump and the hawks had so recklessly painted them. By doing so, Trump gifted China with an ally and platform in the Middle East that it never had before.

Ultimately, Biden’s trip may have had no specific purpose in mind. This report in Cairo’s Al-Ahram newspaper usefully conveys some of the general aims of Biden’s sojourn in the region:

Arab allies are aware that at the end of the day they cannot just turn their back on the US – due to reasons of military, economic and even education cooperation. The issue now, they argued, is about reworking the parameters of relations, where neither side is expecting to turn back the clock. In other words, they explained, the US will remain a strategic ally and possibly the top strategic ally, but not the exclusive strategic ally of the past.

Hey, that sounds very familiar. The US being a strategic ally in the region, but no longer the exclusive one? That should be ringing a bell with New Zealand, about the Pacific. If the US can accept competition as a fait accompli in the Middle East, we can surely afford to take the same pragmatic approach towards China’s presence in the South Pacific.

Footnote One: PM Jacinda Ardern took that same pragmatic approach when she cited China’s long history of association with the Pacific, during the course of her recent landmark speech to the Lowy Institute in Sydney.

Footnote Two: As for the Palestinians, Biden has been less dismissive of their legitimate aspirations than Trump. Even so, Biden has also been more reluctant than some previous US administrations to intervene and offer to arbitrate – even superficially – on behalf of the Palestinians. As al-Ahram commented last week:

Another sign of change that the Biden visit is revealing is the position of the US president on the Palestinian-Israeli struggle. Biden neither shrugged off the Palestinian Authority as Trump did, nor did he act firmly to re-engage Washington in launching negotiations between Palestinians and Israelis… Biden confined himself to promising economic support to the Palestinians.

Indeed, as al-Ahram continued, Biden has put much more effort into promoting unity between Israel and the Arab world:

Instead of seeking a move on the Palestinian-Israeli front, the US President was more focused on giving a push to the voluntary Arab normalisation with Israel that has been gaining ground since the signing of the Abraham Accords in August 2020…