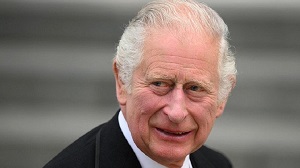 One feels reluctant to pre-empt the verdict of history, but maybe we need to have a Plan B in mind just in case the reign of King Charles III turns out badly. With that possibility in mind, are there any other countries that do a reasonably good job of electing their ceremonial head of state? There is no perfect model for New Zealand to follow but – arguably – Ireland has made a pretty good fist of it over the past 70 years or so.

Ireland has roughly the same population as New Zealand, so the pool of talent is similar in size. Supposedly, one of the arguments for retaining the British monarch as head of state is that electing a New Zealander to the post would be polarising in ways that don’t arise when one simply accepts whoever gets delivered to us by means of the Windsor genetic lottery.

Supposedly, if we became a republic we would have to choose our first President from among former politicians (Helen Clark?) sports figures (Richie McCaw?) tribal leaders (Tipene O’Regan?) Or maybe, from among our artists. (We could do a lot worse than President Don McGlashan.)

Ireland seems to have found something of a middle way, ever since it created the office of President back in 1937. Winning candidates can serve only two terms, consecutively or otherwise. They get elected by a Single Transferable Vote system. Michael Higgins, the current Irish President, was elected in 2011, and got re-elected to another seven year term in 2018. The website of the President of Ireland describes Higgins in these terms:

“A passionate political voice, a poet and writer, academic and statesman, human rights advocate, promoter of inclusive citizenship and champion of creativity within Irish society…As Ireland’s first Minister for the Arts in 1993-97, Michael D. Higgins’ achievements included the re-invigoration of the Irish film industry, the establishment of Teilifís na Gaeilge, now TG4, and the repeal of censorship under Section 31 of the Broadcasting Acts. He also established a rich network of local arts and cultural venues which brought a crucial access to citizens across Ireland to these facilities. Moreover, he drove the re-vitalisation of Ireland’s canal network, resulting in over 1,000 kilometres of navigable waterways, supporting thousands of jobs, and creating wealth in many rural and economically-deprived areas of the State.

Throughout his life, Michael D. Higgins has campaigned for human rights and for the promotion of peace and democracy in Ireland and in many other parts of the world, from Nicaragua and Chile to Cambodia, Iraq and Somalia. In 1992, Michael D. Higgins was the first recipient of the Seán MacBride Peace Prize from the International Peace Bureau in Helsinki, in recognition of his work for peace and justice in many parts of the world. Michael D. Higgins is also a writer and poet, contributing to many books covering diverse aspects of Irish politics, sociology, history and culture.

OK, so maybe that’s the calibre of people you get in a country where the arts are such a vital ingredient in the nation’s lifeblood. Higgins is not an anomaly, either. Previous incumbents have included the impressive likes of human rights advocates Mary Robinson and Mary McAleese.

The relevant point for New Zealand is that once the reign of Elizabeth II finally ends, this country can choose to cease its reliance for its head of state on a family who reside in a country of diminishing relevance to us, and to the world at large. Diehard royalists to the contrary, the alternative need not involve a total loss of meaningful connection.

These days, Commonwealth members meet as equals and no longer as a hierarchy with Britain at its apex. In his speech in June to the Commonwealth Heads of Government meeting in Rwanda, Prince Charles stressed that all sorts of constitutional arrangements were entirely acceptable to The Family:

The Commonwealth contains within it countries that have had constitutional relationships with my Family, some that continue to do so, and increasingly those that have had none. I want to say clearly, as I have said before, that each member’s Constitutional arrangement, as Republic or Monarchy, is purely a matter for each member country to decide. The benefit of long life brings me the experience that arrangements such as these can change, calmly and without rancour.

So… When it comes to the monarchy, everything can change, so that everything can stay the same. Some countries of course (e.g. the USA) combine the roles in one person that other countries split between a prime minister who wields real power, and a head of state whose powers are almost entirely symbolic.

That symbolism does come with a price tag, if New Zealand did choose to retain a largely ceremonial head of state within a new republican framework. Not surprisingly, Ireland has a “significant” share of people who think the head of state is (a) a waste of time and money and that (b) no former politician should ever be allowed to run for the job. The rest of Ireland though, seems reasonably content with how Higgins at least, has been doing the job. Evidently, there can still be garden parties.

In New Zealand, everyone seems to accept that this country will someday become a republic, but just not right now, thanks. The pageant of royalty – the kings and queens, the costumes and the crowns, the dutiful royals and the rascally royals – remains just colourful enough to be kept on the public purse, even when the royal pageant is being played out by a family as dull as the Windsors. Besides, there would be some homework involved in putting a republic in place.

Most of the powers of an elected head of state – and the significant limits on those powers – would simply transfer over from the current vice-regal arrangements. Yet by being shorn of the regal trappings, the balancing acts involved will inevitably seem more naked and somewhat more arbitrary.

For example: the expectation that the head of state acts on the advice of the elected government has occasionally been controversial in practice. Arguably, it has been countries retaining the monarchy that have sometimes acted in less democratically sensitive ways. Famously in Australia, it was a governor-general who dismissed the elected Whitlam government.

Yet in Ireland in 1982, it was an elected head of state – Patrick Hillery – who obeyed the advice of Prime Minister Garret FitzGerald to dissolve Parliament, despite furious calls from the Opposition for Hillery to refuse the request. In essence, the reserve powers of a head of state will tend to self-destruct if they are ever used. They are therefore very rarely – if ever – used at all.

Although we are well into the twilight of the second Elizabethan age, the final curtain may not fall – if the late Queen Mother’s longevity is anything to go by – for another five years or so. Charles could be in his 80s when he finally becomes King. Initially at least, Charles can expect a sympathy vote from the public, for having had to serve such a ridiculously long apprenticeship for the job.

There may be a downside for the public though, from Charles having to wait in the wings for so long. He may feel impelled to make his mark – and concerns have been expressed before about how cavalier Charles can be when it comes to observing the constitutional boundaries that are supposed to exist between the Palace and Parliament.

Charles does seem to like to involve himself in the affairs of state. However, some observers believe the fears that, once crowned, he will continue to meddle are exaggerated. On this subject, Charles himself said in 2018: “I’m not that stupid.”

Still… It seems ironic that New Zealand may be clinging to the monarchy out of concern for the potential politicisation of the role, if we ever had to elect our own head of state. Yet the next British monarch may actually have very few qualms about being a political player himself, even while being careful to do so well out of public sight. Even Queen Elizabeth II has not been without blame when it comes to getting the monarchy involved in contentious political issues.

Footnote: Any shift to republicanism would have to devise a mechanism for creating the slate of candidates for President. To take our prospective role model: Ireland has an upper house and a lower house (the Dail Eireann) and an upper house (the Seanad Eireann) who collectively comprise the national Parliament, or Oireachtas.

A candidate has to be nominated by at least one of the following means:

*At least 20 members of the Oireachtas which all up, has some 218 members.

*At least four county or city councils. (There are 31 councils)

Would New Zealanders be happy to let a bloc within our single chamber Parliament – or a few city councils – choose our slate of presidential candidates? Probably not. If the MMP transition is anything to go by, we would probably conduct a two tier vote with a wide open first round, followed by a final run-off between the two, three or half dozen highest polling candidates.

Ultimately, the transition to a republic can’t be made devoid of risk. In Ireland, Michael Higgins won re-selection in 2018 by a whopping majority, but (oddly) three of his rivals were former contestants and/or investors in the Dragons Den TV show. One of the former Dragons ended up in second place, mainly by running a strong welfare-bashing campaign.

So yes, there are potential pitfalls in moving from feudalism to a democracy. Populism could throw up all sorts of contenders. Surely though, that risk shouldn’t be a deal breaker. To some, King Charles III seems like a walking risk to our “settled” constitutional arrangements.

In case you missed it on Monday, here’s this week’s music playlist: