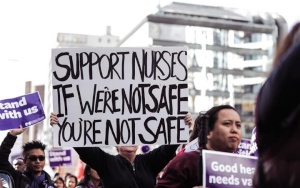 That giant sucking noise is the sound of the jobs of our nurses, doctors, and midwives being vacuumed up by medical recruiters from New South Wales. The conservative Perrottet NSW state government has just announced ambitious aims to recruit more than 10,000 nurses, doctors and other staff as part of a $A4.5 billion effort to meet the needs of the overwhelmed public health sector across the Tasman:

Midwives, paramedics, pathologists, pharmacists and allied health professionals will also make up 10,148 full-time recruits under the four-year plan, with more than two-thirds of staff to sign on in the first year, according to the state government… Premier Dominic Perrottet said 7674 recruits in the first year will give COVID-fatigued health workers the critical support they need while fast-tracking elective surgeries.

Stop me if this sounds familiar, but the public health system in NSW has been facing severe problems caused by chronic understaffing, surging demand and high levels of staff burnout related to Covid. It is also being confronted with the longer-term health needs of an ageing population. Difference being, in NSW they’re doing something about it.

As we all know, the same understaffing/burnout pressures have been rife within our public health system for more than a decade. The Key government systematically underfunded the health system by apportioning it a declining share of GDP from 2010 onwards, mainly because its austerity measures and tax cuts programme were treated as a higher priority. Since then, the belated inputs to public health by centre-left administrations have not been enough to reverse the negative trends.

Having given their all to meet the pressing health needs during the pandemic, most of our nurses, midwives, pathologists and doctors have had enough. They can be forgiven for looking at the more attractive pay and working conditions on offer in NSW, and wondering what is keeping them here in New Zealand.

It certainly wouldn’t be the sense here of being valued by their employers. For many nurses, the recent haggling over a pay round already undercut in real terms by the inflation rate (and marked by the ill-feeling generated by the back-dating issue) will have been the last straw. New Zealand really, really can’t afford to lose their expertise, and experience. If we do, we won’t be replacing them at the rate required, either:

Nearly one in three nursing students drop out before qualifying, due to financial pressure, family responsibilities and other factors made worse by Covid-19… A report from last June commissioned by district health boards found 29 percent of nursing students enrolled between 2010 and 2017 dropped out….. But there’s some evidence that the dropout rate has accelerated since Covid-19 began.

Beyond the lip service given to frontline health workers that they are so, so valued, there is an obvious lack of care for them by their managers and funders. For years, management has cynically relied on the fact that nurses, doctors, midwives and other health professionals will continue to display a higher regard for the quality of the clinical care they provide to their patients, than their employers will display towards them.

Now, NSW stepped up with tempting offers that go well beyond lip service. Not only will these offers attract health professionals that taxpayers here have helped to train, but New Zealand will also be outbid on what is now a global market for trained medical staff born in other countries.

Footnote: Australia can afford these incentives not simply because it is a far wealthier country. More to the point, some of its state governments also have a more enlightened attitude when it comes to managing the relationship between taxes and the provision of public services.

Here, it is taken to as an item of faith that any increase in taxes would be politically suicidal. It is generally accepted by all of our political parties (and by the commentariat) that New Zealand can only cut taxes, even though (a) some of our services and health statistics are already headed for Third World status and despite the fact that (b) polls have consistently shown the public would accept higher taxes if this would deliver us better public services. The Scandinavian trade-off used to be the way we did things here. It could be again.

Some Australian state governments have recognised that reality, and are running with it. For example: last year, the state of Victoria funded a sizeable increase in mental health services by imposing a dedicated mental health tax on big employers i.e. those with a wage bill over $10 million annually

Under the levy, businesses paying taxable wages of $10m or more in Victoria pay a 0.5% surcharge on them. This rises to 1% for businesses paying wages over $100m. For the transition period – 1 January until 30 June – the respective annual thresholds are $5m and $50m.

Reportedly, the levy was designed to fund the Victoria’s government’s spend on mental health reform – estimated to provide $3.7bn over the four years to 2026 – announced in the wake of a recent royal commission of inquiry into the adequacy of mental health services. Oh, and the compliance costs have been negligible. Since employers in Australia already pay a payroll tax, the mental health levy is simply an add-on. Amazingly, employers in Australia pay both taxes and still manage to make healthy profits!

Politically, one of the interesting things about this situation is that the conservative Liberal opposition in Victoria had originally campaigned on a solemn promise to repeal the mental health tax. It has since backflipped, and is now endorsing it. Evidently, the landslide victory won by Labor in the recent state election in South Australia (where Labor campaigned on the issue of health funding) spooked the Libs in Victoria into changing their tune. Higher taxes = better public services = winning elections. Who knew?

All of which indicates that Election 2023 in this country could be fought on two fronts. Yes, the Opposition has a potent weapon in the cost of living crisis. The government, though, will be able to counter-attack on the issue of which services the Opposition will have to cut if it is going to deliver on its promises to cut taxes. (There’s a basic problem with National being a credible government in waiting. Come 2024/25, a bit of extra thrift and a few items of deferred government spending here and there… Will come nowhere near meeting National’s promises to date.)

Meaning: if tax cuts are the cure, the remedy looks like being worse than the ailment. But by Election 2023, many of our current nursing and midwifery workforce will be working (and paying their taxes) elsewhere.

In case you missed it on Friday, here again is this week’s music playlist: