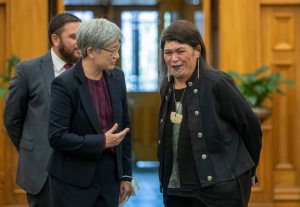 Good grief. Has foreign policy commentary really devolved to the point where our diplomatic effort is being measured by how many overseas trips have been taken by our Foreign Minister? Weird, but apparently so. All this week, a series of media policy wonks have been invidiously comparing how many trips offshore Nanaia Mahuta has been taking, when compared to her Australian counterpart.

Even allowing for how Covid has made foreign trips a rarity for everyone over the past two years… If we’re truly going to resort to a frequent flier standard for measuring diplomatic effectiveness, then Murray McCully would be the greatest Foreign Minister in this country’s history. Believe me, he wasn’t.

There’s another way of looking at this. The brief visit to Wellington this week by Australia’s Foreign Minister Penny Wong was merely the latest whistle stop on her frantic dash around the Pacific to make up for lost diplomatic ground, and to compensate for the damage Australia has gratuitously done to its relations with the Pacific.

Meaning: on the campaign trail, the Albanese team had hyperbolically described the security deal between China and the Solomons as a “massive foreign policy failure” that had created a serious threat to the nation’s security. This deliberate exercise in political overkill was continued even after Honiara had given assurances to Canberra that any new facilities built in the Solomons with China’s help would not be available to its military.

So… Having hyped to the max the “China threat” for domestic political gain, the new Albanese-led team had little choice but to send Wong off on a diplomatic rescue mission to try and repair the damage done to Pacific sensibilities. This was especially imperative because China – in the light of Australia’s ham-fisted and patronising approach to the region – had seen and grasped a diplomatic opening.

In sum, Wong’s foreign sojourns were best seen as a desperate attempt to apply a diplomatic fix to a problem very much of Australia’s own making. Only a few months ago, then Defence Minister Peter Dutton had been telling the world to prepare for a war with China in the Indo-Pacific.

To suggest – as National and the ACT Party have been doing this week – that we should have gone dashing around the Pacific in Wong’s wake in some Mini-Me role is really absurd. Nothing could have been more certain to rankle the sensibilities of Pacific states already annoyed by being used as political footballs – beware the China threat! – for domestic political gain by Australia and to a lesser extent, by New Zealand as well.

Furthermore, Mahuta has hardly been asleep at the wheel. She had already been in Suva in late March – well before the Aussie circus caravan kicked into gear – on a trip where she had signed a partnership agreement with Fiji that included a joint security dimension:

Its security provisions include a promise to uphold sovereign authority over land and maritime territories, borders and exclusive economic zones, on problems like maritime security and transnational crime as well as sharing information and training.

In short, this new deal was a timely addition to the Biketawa Declaration that among other things, underpins the security arrangements in the Pacific.

For decades, New Zealand has been seen (none too flatteringly) as Canberra’s deputy sheriff in the Pacific – the soft cop to Australia’s hard cop with the big cheque book. Again this week, Wong tried to deputise New Zealand to help out with its Pacific policy reset.

We should do so – if at all – strictly on our own terms. From the outset, we should be asking Canberra for concrete concessions in return for any services we render. Up front, those concessions need to be on the rate and the legal grounds for the so-called “501” deportations of criminals back to this country.

After all… Why should we – as Jacinda Ardern recently told Scott Morrison– accept Australia exporting back to us the criminals that have been very much of Australia’s own making? (One can say much the same about Australia’s hyped-up policy towards China, which has done so much to erode the diplomatic ground that we now have to recover in the Pacific.)

On the 501 issue though, Albanese is still insisting to his domestic audiences that the 501 policy will remain in place. All that his administration has offered us to date is a “consideration” of New Zealand’s concerns. Surely, that isn’t anywhere near enough. In a nutshell though, it seems typical of the Albanese approach i.e. no genuine policy shifts on our grievances, but a lot more warmth in the delivery of the bad news.

In similar fashion, Wong indicated, Canberra will be listening more attentively to what the Pacific nations are saying, especially about climate change. Good to hear… But again, not enough. On climate change, Australia has promised to cut its own emissions by 43% by 2030, but the how of that reduction – and the ways that the pursuit of this worthy target will play out in the meantime within the Pacific – remain opaque.

On the upside, Wong did signal that Australia will be boosting its aid and development efforts in the Pacific.

Again though, this may be too little, too late. Like New Zealand, Australia is paying lip service to the sovereign right of the Solomons Islands and other Pacific nations to do security deals with whom they see fit… Yet Canberra has also said that it wants all such deals to be kept within a “Pacific family” from which China is to be kept excluded.

That’s an obvious double standard involved in much of this. After all, Australia recently and secretly signed up to the new AUKUS security pact (with outside powers like the US and UK) without consulting its “Pacific family” beforehand. Plus, it hardly seems credible to be chiding Pacific states against the dangers of becoming overly reliant on China, even while Australia and New Zealand continue to depend on China as their main trading partner. The none too subtle message: we can handle it, but you can’t.

At this stage, the new Aussie government is offering New Zealand (and the rest of the Pacific) little more than warm rhetoric and good intentions. At the Pacific Islands Forum leaders meeting next month, Albanese and Jacinda Ardern will surely need to flesh out just how they propose – individually and together – to compete with China on development aid, on security provision, and on combatting climate change across the region. Warm rhetoric about “the Pacific family” will get everyone only so far.

Footnote One: It isn’t often that New Zealanders get a chance to feel sorry for the Australians. Yet spare a tear. The incoming Albanese administration has inherited soaring fuel and food prices, rising mortgage interest rates, and a serious energy crisis that threatens to include rolling blackouts, just as winter begins to bite.

There is no respite in sight. A global recession is being tipped for mid 2023. Back when the Global Financial Crisis hit in 2008, China’s rampant pursuit of double digit economic growth saved Australia and New Zealand from experiencing the levels of social and economic pain felt elsewhere. Basically, China stepped up and bought lots and lots of our stuff. Yet that life-raft won’t be available next time around, given that China is being forecast (by the likes of Goldman Sachs) to reach only a 4% level of growth next year.

As a consequence, even a smaller global downturn in 2023 could be felt far more keenly here this time around.

Shygirl on a roll

The combination of Shygirl’s nervy, fractured hyperpop with Arca’s experimental production chops continue to bring out the best in both of them. Of Grenadian descent and raised in south London, Shygirl’s was born as Blane Muise, 29 years ago. Her varied career as a DJ, rapper and producer (in collaborations with producers like Arca, Mura Musa and the late and much lamented Sophie) has brought her to the attention of heavy hitters like Rihanna. In the lead up to the release of her Nymph album later this year, Shygirl keeps releasing quality singles one after the other. Here’s the latest:

And here, from a couple of months ago, is a personal favourite, “Firefly” …