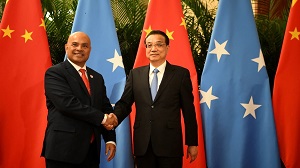 For years, it has been no secret that China wants closer security and trade ties with the small nations of the Pacific region. All part of Beijing’s self-image as a global superpower. To that end this week, Chinese Foreign Minister Wang Yi embarked on an unprecedented 10-day tour of the Pacific, aimed at convincing his Pacific hosts to join a cross-Pacific agreement that would let Beijing provide them with high-level police training and security, shared data co-operation and other joint services ranging from agriculture to tourism.

On his visit, Wang would be touching down in the Solomons, East Timor, Kiribati, Samoa, Fiji, Tonga, Vanuatu and Papua New Guinea. Given the worries already being expressed about China’s looming pact with the Solomons, Wang’s visits appeared likely to multiply that concern by a factor of ten.

Kiribati for example had already – like the Solomons – switched its diplomatic recognition from Taiwan to Beijing in 2019, even though it has reportedly retained close ties with American interests in Hawaii. China is offering to assist with the upgrade of vital infrastructure in Kiribati. Moreover:

When he arrives in Fiji, Mr Wang will chair a meeting with foreign ministers at the Pacific Islands Forum whose members’ security interests are variously tied to America, France or New Zealand, but also to China.

The Australian media has been reporting Wang’s overtures to the Pacific with some alarm:

Almost immediately, Australia’s new Foreign Minister Penny Wong boarded a plane to Fiji and to other points in the Pacific to counter Wang’s sales pitch. According to the Melbourne Age :

Fiji of course, is a free country that can make other deals with who-ever it likes. In fact, getting on a plane right now to tramp down the same diplomatic paths taken this week by Australia and China would be counter-productive, in that it would be likely to be seen as an exercise in overkill and arm-twisting. Rather than throw a collective hissy fit about China, maybe everyone concerned should just sit down, take a stress pill and think this over. Kneejerk claims to having autonomy “in our neighbourhood” have never been appropriate.

That’s because the Pacific region is no longer a monopoly franchise area wholly owned and operated by Washington and its helpmates in Canberra and Wellington. Overt competition for influence in the Pacific now exists. This may end up being a good thing. China, after all, has as much right to a diplomacy and aid role in the Pacific as anyone else. Its presence may even be beneficial – if genuine diplomatic competition means that the needs and desires of the Pacific nations themselves are better listened to, and are treated with more respect.

Wang Yi’s sortie around the Pacific was exquisitely timed to coincide with the latest meeting of “The Quad” – a bloc comprised of US, Japan, Australia and India that was formed solely to counter and to contain China’s influence in the “Indo-Pacific.”

Even that term is ideologically loaded. The region used to be known as the “Asia Pacific” until the decision was made that Asia’s most powerful country (China) was not a welcome presence on board. The term “Indo Pacific” was then adopted to convey the desired sense of exclusion and encirclement. Doggedly, New Zealand kept using the older term until early 2019. It has finally caved in to the lingo and – arguably – to much of the mindset of our traditional allies.

That’s a far more disturbing trend. Recently, Werewolf analysed the extent to which the Ardern government and its military lobbyists are re-aligning New Zealand with the aims and actions of our old military allies. These include supporting modes of forward force projection that make “defence” look a whole lot more like offence, especially when it comes to this pressing business to do with the containment of China.

Meaning we need to be able to make a better case on merit for why working jointly with the West will deliver better outcomes for the people who live in the region. It shouldn’t be all about us maintaining our strategic advantage on the Pacific chessboard.

More than anything, our efforts to re-engage with Pacific nations has to avoid sounding like we’re making them an offer they can’t refuse. The era of us running a diplomatic protection racket in the Pacific (in tandem with the Australians) is over. There is no going back to the serene, neo-colonial dependencies that have previously characterised our role in the Pacific for so long.

Footnote: In yesterday’s speech by Penny Wong, she promised to take the impact of climate change on the Pacific seriously. The new Aussie government, she said, would be appointing a special ambassador on climate change, and would be reducing its own emissions. Even on this point though, while she conceded Australia’s major role as a coal exporter, she couldn’t resist pointing to China’s hypocrisy as well:

Elsewhere in her speech, Wong went for the jugular:

In comments directed at Beijing, Wong told the forum that Australia would not impose unsustainable financial burdens. “We are a partner that won’t erode Pacific priorities or institutions,” she said.

In other words, beware the fish-hooks in China’s offers of aid. Better the devil you know etc.

Footnote Two: Significantly, China’s proposal for a 10-nation joint aid, trade, security and diplomacy deal across the Pacific includes a clause that commits members to not interfering in China’s internal affairs. It is due to be debated at a Pacific Foreign Ministers meeting on May 30.

Footnote Three: The Australian election results have thrown up interesting evidence that the Morrison government’s hardline on China proved costly in some marginal electorates. As the New Daily reported this week:

…In Tangney, Asian-Australian voters deserted the Coalition. Research suggested core Liberal voters in higher-income electorates such as Curtin, which fell to an independent, had nuanced views on Chinese relations and enjoyed the fruits of a trading relationship. “They thought the government’s behaviour was moronic,” one Labor source said.

Hard to tell if voters in this country in those electorates containing high numbers of Kiwis of Asian heritage would react similarly. The Ardern government’s rhetoric on China has come nowhere near, say, Peter Dutton’s scare warnings about Australia being at “war“ with China. Even so, given the stridency of the ACT Party’s stance on China, it does seem as though these days, ACT leader David Seymour feels he can take the Asian community in Epsom somewhat for granted.