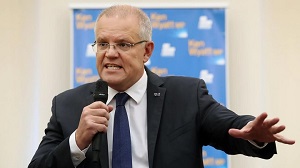 The foibles of the Aussie electoral system are pretty well-known. The Lucky Country doesn’t have proportional representation. Voting for everyone over 18 is compulsory, but within a preferential system. This means that in the relatively few key seats that decide the final result, it can be the voters’ second, third or fourth ranking preferences that finally get the winner over the 50% line. Plus, there seems to be nothing to prevent the ruling party in Canberra from spending hundreds of millions of taxpayer dollars on local projects plainly intended to sway the results in the key marginals.

Wait, there’s more. Much as voters seem to loathe PM Scott Morrison and his administration, there is precious little enthusiasm for Labor and its policies. This is causing a stampede towards third parties and to independent candidates, most of whom – but by no means all – would be more likely to support a Labor-led government. All of which means it is still very, very hard to predict the final outcome of Saturday’s election.

According to the polls, Labor has been leading on the first preferences for most of the campaign. That statistic may be somewhat meaningless, given the role of preferences in the key marginals. In any case, Labor’s early lead has all but vaporised as the contest has tightened up in the past few days.

Labor strategists will be sweating that this tightening could herald a re-run of the 2019 election in which Morrison came from behind to win. At crunch time, not enough voters with a distaste for Morrison may be persuaded to think that a Labor alternative would do any better. Stick with the devil you know etc.

Even on election night, the tightness of the contest will mean that the key marginals dotted around the country will not break in any uniform fashion. The only predictable feature on Saturday will be the voter flight to third parties (the Greens?) and to independent candidates.

The impact of the so-called “teal independents” – a blue green colour that signals their political ideology – remains a fascinating aspect of this election as it heads into the home stretch. Their rise reflects the division between the centre-right moderates out in the electorates, and the party extremists holding power in Canberra.

Most of the teal independents are women. Most of them are running against male Liberal MPs in some of the country’s wealthiest electorates. Counting the Senate candidates there are 22 of them, 15 of whom are running in marginal Liberal electorates from Perth and Adelaide to Sydney, Melbourne and parts of hinterland Victoria. Their campaigns are being part funded (at least) by a group called Climate 2000 bankrolled by Simon Holmes à Court, an energy investor and the son of the country’s first billionaire, Robert Holmes à Court.

As the Australian Broadcasting Corporation (ABC) recently put it :

The common themes[ of the teal independents] are climate change… and the need to do something about an independent commission against corruption, so integrity in politics.

In some respects, the teal candidates are tapping into similar motivations in New Zealand that drove thousands of moderate centre-right voters into the arms of Labour at the last election. Across the Tasman, the teal candidates in previous years would have been reliable Liberal voters. They tend to be socially progressive, economically conservative, pro-climate and pro-integrity.

This time around though, the perception is that under Scott Morrison, the party has shifted much too far to the right. Basically, the Liberal-led coalition is regarded as having turned into a male bastion of social conservatism imbued with Christian values that are anti-women, and anti-LGBT. To the teal candidates, the close ties between the Morrison administration and Corporate Australia are also preventing any meaningful action on climate change, and are fostering corrupt forms of cronyism.

These twin crusades – against climate inaction and corruption – has enabled the teal independents to tap into the popular rage against the political Establishment. They are running as outsiders, intent on cleaning up the cesspool in Canberra.

A formula for their electoral success has been devised. Reportedly, the Liberal incumbent needs to be polling below 45% in their approval ratings, while the teal challenger has to have name recognition above 30% to provide a significant launchpad, and one capable of attracting enough of the Labour and Green preference votes. In modern politics, any politician running without a party banner needs to have high name recognition. This explains why almost all the female teal candidates were successful professionals before they entered the political arena.

The teal candidates include Kate Chaney in the seat of Curtin in Western Australia that was formerly held by Liberal stalwart Julie Bishop. In the NSW seat of Wentworth, business executive Abigail Spencer is up against Liberal Cabinet Minister Dave Sharma ; former ABC journalist Zoe Daniel is contesting the bayside seat of Goldstein in Melbourne, and former Olympian alpine skier and barrister Zali Steggall is seeking to retain the seat of Warringah that she won off former Liberal PM Tony Abbott in 2019.

IMO, Kooyong in the eastern suburbs of inner Melbourne is the most interesting of these contests. Although held by the federal Treasurer John Frydenberg with a 6.4% majority. Frydenberg is now in a tight contest against teal independent Dr Monique Ryan. (That’s assuming her campaign’s unclear instructions to her supporters about how to fill in their voting forms hasn’t ended up disqualifying hundreds of their ballots.)

The wider significance of the result in Kooyong is that if Morrison loses the election (and resigns) and if his heir apparent Frydenberg also loses his seat in Kooyong then… The next leader of the centre-right in Australia would almost certainly be the very unlovely Peter Dutton, a figure so polarising that any Labor administration in Canberra could expect to have a very long honeymoon period indeed.

Footnote One: In New Zealand, the“ blue green “ movement has been widely seen to be a wholly owned franchise of the National Party, and a somewhat pointless exercise in greenwashing. Theoretically though, there should be ample motivation for a genuine teal revolt here by the moderates on the centre-right.

After all… A Luxon/Act government is shaping up to be highly regressive on social policy and hardline on the economic cutbacks to public services required to fund its promised programme of tax cuts. Moreover, a Luxon/Act government would be even more captive to the farming sector than the current government, thereby ruling out any meaningful action on climate change. This week, Christopher Luxon and his colleagues have proved unable to come up with a single positive alternative policy of their own on climate change, amid their criticisms of the Emissions Reduction Plan.

Even so, if a rebellion by centre-right moderates was ever to happen here similar to what we’re currently seeing across the Tasman, any blue green revolt would struggle to get leverage under MMP. In any case, a blue green revolt would be more likely to be a second term phenomenon, after it has begun to sink in just what New Zealand will have brought upon itself by electing Christopher Luxon.

Footnote Two: As mentioned above, one of the bizarre features of this election campaign has been the lavish spending of taxpayer money by the Liberal-led coalition on projects aimed at benefiting its own candidates in marginal electorates. As the Guardian noted, this funding favouritism often goes hand in hand with a spectacular lack of funding for projects in Labor-held seats, even if these are located right next door.

Lindsay in west Sydney provides an excellent example of blatant pork barrel politicking by the Morrison administration. A surprise Liberal gain in 2019, the Liberal government is reportedly promising a whopping $247 million in local funding projects to help its own candidate Melissa McIntosh hold onto the seat.

The largesse on offer includes a promise to spend $232.5 million on widening and improving the 6.5 kilometre stretch of Mulgoa Road linking the Penrith community to greater Sydney; a further $12 million to upgrade a commuter car park, another $2 million for a new assistance dog training facility and $590,000 towards upgrading a local park. The marginal seat of McEwen in north Melbourne has also been promised $15.3 million in handouts for a sports facility and improved youth services.

In the ethnically diverse seat of Chisholm in Victoria, almost half the voters were born overseas, and Mandarin Chinese speakers comprise 20% of the population. The Liberal incumbent Gladys Liu holds Chisholm by only a 0.5% margin. To help her win, the Morrison government has so far made $13.7 million in local funding announcements during this election campaign.

Footnote Three: Gilmore in NSW is a coastal/provincial marginal that handily combines all of the main election themes: locals have experienced tough times during the pandemic, from fires and floods, and evidently, many have strong feelings about the Morrison administration’s competence level. In Gilmore, the contest is between Liberal heavyweight and former state minister Andrew Constance, and Labor incumbent Fiona Phillips, who won the seat by a narrow 2.6% margin.

Footnote Four: Finally… At least MMP largely saves New Zealanders from this kind of concentration on key marginals that used to be such a feature of political life under FPP. In Australia, it makes political corruption a very hot political issue. To compound the problem, Morrison has failed to deliver on his promise to create an independent commission to investigate political corruption.

This failure sits alongside Morrison’s personal track record of bullying, anti-feminism, and closeness to Christian fundamentalism. Not to mention his abysmal handling of the bush-fries and floods that have typified his general inaction on climate change.

All the above explains why so many Australians want to be well rid of Morrison and his whole rotten crew. If only Labour and its leader Anthony Albanese could inspire enthusiasm among Aussie voters, the Opposition would win in a canter. Instead, there is a widespread “plague on both their houses” sentiment among voters, and this is making the final outcome totally unpredictable.