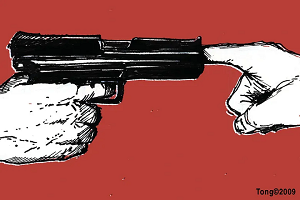 Thanks to decades of free market zealots opposed on principle to sensible regulation… We’re now faced with a supermarket duopoly so entrenched that any prospective new entrant would have to think twice before taking them on.

Even if they did, it might take as much as an estimated $1 billion investment upfront and 100 stores before the new entrant could hope to start getting price traction on the incumbents. For the foreseeable, we’re left with a government that’s merely tinkering with the problem. Consumers should not be holding their breath over what even the sensible regulatory steps announced yesterday by the government might achieve.

Much of the problems at the checkout can be traced back to the power the chains hold over their suppliers. So yes, one of the useful items in the lucky dip of regulations announced yesterday is the ability that the suppliers will have to bargain collectively in future.

The opening up of wholesaling to fair competition is also a step in the right direction. (It would have been even better to have moved almost overnight to make wholesaling an entirely stand-alone enterprise, beyond the ability of the supermarkets to rig the game.)

Still, at least the chains’ current ability to divide, rule and punish any suppliers who complain is going to be diminished. The code of conduct for how supermarkets deal with their suppliers – and the dispute resolution process when things go pear-shaped – should also help to create a fairer playing field.

If this sounds like faint praise… So be it. Yes, it is good that there will be (a) a supermarket industry regulator (b) more consistent and transparent price labelling on products on the shelves and (c) annual reviews of compliance.

But… It will be a very long time (if ever) before any of this translates into visible savings for the consumer. How long a lead-in time did the supermarket giants really need? Surely, they’ve had ample time to prepare for the fairly minimal changes they now face. The big structural changes to their operations have been deferred, probably permanently. Most of the changes announced yesterday had been flagged in the Commission’s draft report last year.

In fact, it is grimy amusing to re-read what the draft report had said about the structural separation road that has not been taken:

64 We appreciate that structural separation of a wholesale business unit and potential divestiture would be a substantial undertaking, involve significant costs, and that careful consideration of the risks involved would be required. This would include considering risks beyond the grocery market, including distortion of investment incentives. [ the sharemarket might take fright! ] ….We expect that structural separation would only be considered if other options were not feasible, had proved ineffective, or did not appear likely to improve competition within the desired timeframe.

Yep, we wouldn’t want to impose extra costs on the supermarkets, or “distort” the investment decisions made by wealthy punters on the sharemarket. As for the “desired timeframe” for “improved competition” to deliver its blessings… It will take years for yesterday’s round of relatively minor tinkering to deliver noticeable price reductions.

Footnote: As yet the operational rules for the independent industry regulator are as vague as the mooted codes of conduct – be fair, play nice – that characterised the Commission’s disappointing final report. Safe to say, the recommendations released yesterday will go no way towards neutralising the Opposition’s attack lines about the cost of living.

Contrary to logic and morality, there is research evidence that gun control laws in the US actually get loosened – not tightened – in the wake of tragedies like Uvalde. Especially so in parts of the country where Republicans control the state legislatures. As Vox News reported earlier this week:

Recent research finds that this seemingly perverse response — the use of a mass shooting as a justification for loosening gun laws and calling for more guns — is actually the norm in the United States. One study, published in the Journal of Public Economics in 2020, examined state legislatures’ policy responses in the wake of mass shootings — and found that they were heavily tilted toward lax regulation.

How come? Public opinion favours tighter background checks on gun owners and stricter laws to strip domestic abusers of their fire-arms etc. But the gun lobby continues to be better funded, and better organised. It is really good at recruiting men to support pro-gun positions. As this study concluded:

Gun rights groups have had little success in persuading women to become “pro-gun” in attitudes or behaviours. Gun regulation groups have mobilized their female sympathizers but not enough to offset the political engagement of pro-gun men.

Women in both major parties, the research indicates, are more likely to support gun control than their male co-partisans. The political asymmetry in the response to mass shootings is less surprising:

[A] mass shooting in the previous year increases the number of enacted laws that loosen gun restrictions by about 120% in states with Republican-controlled legislatures,” they write. “When there is a Democrat-controlled legislature, mass shootings lead to a statistically insignificant reduction in laws that loosen gun control.”

Over the past few years, gun control advocates in the US have largely concluded that tighter federal gun laws are not a realistic goal. Instead, they’ve tended to concentrate their efforts on the kind of state-level laws mentioned above ie. tougher background checks, and laws that enable the removal of handguns (in particular) from people that pose potential harm to others, or to themselves.

However, it has proved to be very difficult to defeat the well funded efforts of the pro-gun lobby. In the wake of the massacres at Uvalde and Sandy Hook, the pro-gun lobby has – for example – strongly promoted narratives that more guns in schools and childhood centres would be the best response.

Such measures seem to have little practical value. The Uvalde primary school where the recent massacre occurred had an armed security guard. Also, a Texas law passed in 2013 after the Sandy Hook shootings had already allowed for trained school staff to secretly carry weapons. This law was expanded in 2018:

None of this stopped the Uvalde shooter. Texas governor Greg Abbott has rejected calls for tighter gun controls. Such pleas, he has claimed, were only exploiting the tragedy(!) Abbott has sought to reframe the Uvalde massacre as a mental health problem, but he had actually cut the state’s funding for mental health programmes.

Moreover, other countries have problems in meeting the need for better treatment of mental health. They don’t experience what the US routinely goes through. The US is unique among developed nations in the scale of the deadly outcomes when easy access to guns is added to mental health shortcomings, and to other social and personal problems.

Footnote: The toll from America’s love affair with guns is staggering:

Every day, more than 110 Americans die at the end of a gun, including suicides and homicides, an average of 40,620 per year. Since 2009, there has been an annual average of 19 mass shootings, when defined as shootings in which at least four people are killed. The US gun homicide rate is as much as 26 times that of other high-income countries; its gun suicide rate is nearly 12 times higher.

One 2013 Boston University-led study, for instance, found that for each percentage point increase in gun ownership at the household level, the state firearm homicide rate increased by 0.9 percent. And states with weaker gun laws have higher rates of gun-related homicides and suicides, according to a January study by the gun control advocacy group Everytown for Gun Safety.