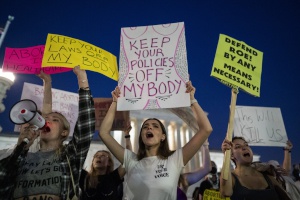 So a Supreme Court stacked with ideologues selected by Donald Trump is about to make an ideological decision to ban the legal right of American women to an abortion. In their infinite wisdom, the US courts have decided that the government cannot force people to wear a mask during a pandemic, but it can force a woman to have a baby, even if the pregnancy is the result of rape or incest. The “pro-life” reverence for the fetus seems roughly in proportion to the contempt for the lives of the women being forced into bearing the full brunt of this exercise in religious fanaticism.

Nor may it stop at abortion. As Michelle Goldberg has pointed out in the New York Times, the language of the leaked Alito draft says that “the legitimate states interests” being affirmed “include respect for and preservation of pre-natal life at all stages of development.” At all stages. By that logic, as Goldberg says, contraceptive measures like the pill and IUDs (that prevent the implantation of a fertilised egg) could also be outlawed, as tantamount to murder.

That’s where the United States seems to be headed. Only a handful of states are vowing to pass laws that will ensure that they can remain as outposts of enlightenment in the gathering darkness. As Goldberg says:

So abortion will probably soon be illegal in around half the states. Some women will be forced to give birth against their will. Some will travel to states where abortion remains legal; we can expect waiting times to increase as out-of-state patients pour in. Some will have illegal abortions. Some women will end up in prison. Some, facing pregnancy complications, will see necessary treatment postponed. Some will probably die.

If these outcomes have anything to do with religious conviction, it seems strictly Old Testament stuff. Jesus died for our sins, didn’t He? Yet Eve is still being made to pay for her sin of wanting to make her own decisions, especially about sex and procreation.

Footnote: In his draft judgement, Justice Samuel Alito repeatedly claims that the right to abortion is not contained in the US Constitution. That is a partisan viewpoint. In Roe v Wade, the Supreme Court had recognized the right to abortion as a fundamental liberty protected by the Fourteenth Amendment. Subsequent rulings have re-stated the Constitution’s protection for this essential liberty, which guarantees each individual the right to make personal decisions about child-bearing.

Accordingly, the Court also decided ( in 1992’s Planned Parenthood v Casey) that the Court cannot dismiss “the certain cost of overruling Roe for people who have ordered their thinking and living around that case.” Moreover, in 2016, (in Woman’s Health v. Hellerstedt) the Court ruled that without access to abortion, the Roe right to abortion is meaningless.

So… Despite Alito’s unhinged railings against the legal foundation of Roe v Wade, that landmark ruling was certainly not an outlier. To repeat: Roe had been firmly based on earlier cases in which the Court had already held that the constitutional right to privacy (contained in the 14th Amendment) protected an individual’s rights to reproductive freedom and bodily autonomy.

For example…in the 1965 case Griswold v. Connecticut, the Court had struck down a ban on the use or sale of contraceptives to married couples, precisely because such laws violated the constitutional right to privacy. Subsequently in a 1972 case (Eisenstadt v. Baird) the Court extended to unmarried citizens the right to contraception – out of respect, as the ruling put it, for “the right of the individual, married or single, to be free from unwarranted governmental intrusion into matters so fundamentally affecting a person as the decision whether to bear or beget a child.”

Furthermore, the US Planned Parenthood organisation has cited with approval the Court’s prior rulings on abortion, which had recognized (quoting from Casey) that “the ability of women to participate equally in the economic and social life of the Nation has been facilitated by their ability to control their reproductive lives. ”

In the same Casey ruling, the Court had further acknowledged that “[a]t the heart of liberty is the right to define one’s concept of existence, of meaning, of the universe, and of the mystery of human life. Beliefs about these matters could not define the attributes of personhood were they formed under compulsion of the State.”

Yet that is precisely what Alito – and his fundamentalist cronies – now seem to be intent on doing. They aim to reduce the personhood of all women, by giving the state the right to dictate when they must start a family.

Other rites of choice

For the past 18 months, MUNA – Katie Gavin, Josette Maskin, and Naomi McPherson – have been releasing a series of highly melodic pop singles and videos infused with wit and serious intent. The video for their “Silk Chiffon” single with Phoebe Bridgers for example, was an amusing take on the 1999 But I’m a Cheerleader queer teen classic movie.

Given the storm clouds over Roe v Wade, MUNA’s new gender-bending, fake facial hair country-ish single “Kind of Girl” seems very timely. As Galvin says, having the freedom to express your identity is one thing, but there’s a need for community as well :

“We wanted to play with the gendered nature of this song because we all three have different relationships to girlhood (and Naomi is non-binary, so not a girl at all!)….The experience brought home the fact that it’s not enough for queer and trans people to be clear about who we are – we also need a community around us that hears us, believes us, honours us, and supports us. We’re very proud of what we made and grateful to everyone who was a part of it. We hope the bigots absolutely hate it.”