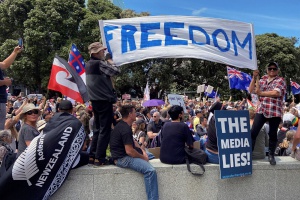 If you or I decided to exempt ourselves from the laws of the land, and -moreover- made public our intention to kidnap and murder the people elected to govern the country, you’d think there would be consequences. The Police, for instance, might be considering whether there is sufficient evidence that a criminal conspiracy exists to commit acts of criminal violence.

After all, the people promoting these beliefs (a) regard the current government and legal system to be illegitimate and (b) have given themselves powers or arbitrary arrest, trial, and execution of MPs and public health figures whose Covid advice renders them responsible for alleged acts of “ genocide.” The security services might also have cause to regard a group professing such beliefs and intentions as posing a terrorism threat to this country.

Charlie Mitchell’s excellent article in Stuff gives a chilling account of the beliefs and intentions of this self- appointed group of vigilantes. Not surprisingly, the so called ‘sovereign citizen” movement originated in the United States, where the FBI has defined it to be a terrorist threat. As Mitchell explains:

Broadly speaking, [the movement’s] central idea is that the Government – which, they believe, is actually a corporation – is inherently illegitimate, and thus so are its laws and regulations. Participants can pick and choose which laws are valid, which they describe as “common law”… While the sovereign citizen and common law movements have existed for some time, they have merged with anti-vaccination rhetoric.

The appeal is obvious; common law provides a framework for exempting oneself from being vaccinated, wearing a mask, or complying with any Covid regulation…Increasingly, it is also seen as a vehicle for retribution…It includes fantasies about Nuremberg trials for people who support vaccination, and mass arrests of politicians and media figures…

Aa Mitchell says. assemblies of the individuals who hold such views have been established in several parts of New Zealand, and “sheriffs” with sweeping powers of arrest, detention and punishment have been appointed. No doubt, some among the movement’s leadership have a thirst for martyrdom and would treat investigation by the authorities and/or arrest as confirmation of their beliefs about the tyranny of the state.

Too bad. Of late, there has been a toxic escalation in the rhetoric being levelled at politicians and public figures, and especially at prominent women. On the evidence, surely a case for preventive action already exists. It would help if all parties – including the opposition parties – could find common ground in publicly denouncing this movement before it begins to act on its stated intentions.

While from to time, we may have misgivings about the quality of our own politicians, but spare a thought for the people of the Philippines. They’re facing a presidential election on May 9, and the front-runner – by a country mile – is Ferdinand “Bong Bong” Marcos, the son of the former dictator. To make a bad situation worse, the leading Vice-presidential candidate is Sara Duterte, the daughter of the country’s current leader Rodrigo Duterte, a man notorious for presiding over the extrajudicial killings (EJKs) of thousands of drug suspects :

According to the government, 6,229 people were killed in police anti-drug operations from July 1, 2016, to January 31, 2022. This number excludes victims of vigilante-style killings. But human rights groups that have direct contact with families of victims peg the number of EJKs between 27,000 and 30,000.

Meanwhile, the tentacles of the Marcos dynasty extend across several generations. At 92, Imelda Marcos has never spent time in jail, despite convictions for graft. She still has a strong following in the family stronghold of Ilocos Norte province, and 28 year old Sandro Marcos, a Marcos grandson and political novice, is hoping to win a congressional seat in Ilocos Norte in the May elections. In Ilocos Norte, Team Marcos is up against a rival family dynasty – the Farinas family – although when its suits them, the two rival clans have sometimes worked as allies, in dividing the local spoils.

There is research evidence that these family dynasties in Filipino politics are directly linked to increased poverty in the regions they rule, and that their reach is expanding:

Political dynasties now possess 29% of all local elected posts…[according to]a study by the Ateneo School of Government… the Dean, Ronald Mendoza, said data showed “fat [family] dynasties” were also more prevalent in poorer provinces in the Philippines where there were poor business climates and low levels of development… Data showed that around 57% of governors were from fat dynasties in 2004. This swelled to 80% after the 2019 midterm elections. The same was seen among congressmen where fat dynasties accounted for 48% in 2004 and 67% by 2019.

The Marcos dynasty has been particularly disastrous for the Philippines. While economic growth in Malaysia and Indonesia expanded many times over since the 1960s, the Marcos robber regime threw economic growth into reverse. It took 20 years after the overthrow of Marcos in 1986 for the country to recover to where it had been in 1982. The Marcos-era human rights abuses were extensive:

During the dark days of martial law, which lasted from 1972 until Marcos’ 1986 ouster, human rights groups said more than 3,000 people were killed, 35,000 were tortured, and others disappeared for their resistance to Marcos’ iron-fist rule. The Marcos family also lined their pockets. An unexplained fortune that experts estimated to be between $5 and $10 billion was stashed in several offshore accounts in Switzerland during Marcos’ rule. With the help of the U.S. government, the Marcos family fled to Hawaii in 1986 with their paintings, jewelry, and cash.

So how come this terrible history has not cast the Marcos family forever into the political darkness? Well, much of the electorate is under 30 and has had no direct experience of the Marcos tyranny, a dark period not adequately taught within the country’s education system. More seriously, all the administrations since the 1986 revolution led by Cory Aquino – and including her own period in office – have failed to alleviate the country‘s grinding poverty and social injustices.

All of this has enabled Bong Bong to campaign as a fresh face and relative political outsider. Reportedly, he has run a positive social media campaign largely comprised of folksy family V-logs. Dire warnings by his opponents about the past have backfired, in that they have been treated as political mudslinging of the sort that Bong Bong himself has risen above.

Footnote: In reality, Bong Bong seems to be a true son of his father. A list of some of his previous corruption scandals can be found here. Yet in the most recent polls taken in February, Marcos was 40 points ahead of his nearest rival, and Sara Duterte was ahead by 20 points in the contest for vice-President. The outlook could hardly be more dire.

Footnote Two: The other disastrous regional election news in recent weeks has been the result of the March 9 elections in South Korea. Thanks to a split on the centre-left, the deeply conservative, fiercely anti- feminist and anti-gay candidate Yoon Suk-Yeol has won a five year term in office. This outcome has been reminiscent of how Ralph Nader’s spoiler campaign in 2000 propelled George W. Bush into the White House – in that the 2.8% vote cast for left wing candidate Sim Sang-Jung of 2.8 % was well ahead of Yoon’s .8% final winning margin.

Wider issues were also in play. The distrust of incumbent politicians among young voters had been apparent in last year’s mayoral election in Seoul where voters in their 20s and 30s had voted by huge 20 point margins against the centre-left administration:

The incumbent administration was blamed for the housing crisis in Seoul which affected mostly younger citizens in their 20s and was rooted as the main cause of the Democrats’ defeat, along with antifeminism sentiment among young male voters.

On the campaign trail, Yoon had blamed the country’s low birth rate on the rise of feminism.

[Yoon] has called for the abolishment of the gender equality ministry, which he says focuses too much on women’s rights and is no longer necessary. He has promised to enhance punishments for false accusations of sexual violence, a step campaigners say will deter even more women from coming forward.

The country’s angry young men, in other words, were decisive in this victory for a slate of regressive, misogynist policies.