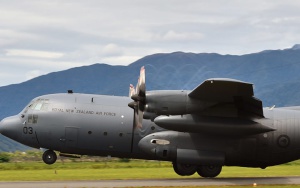 Yesterday’s decision to dispatch one of our ageing C-130 Hercules cargo planes to Europe for two months will – hopefully – help to get essential supplies and ammunition closer to where Ukraine’s people and their armed forces can access them. The “ hopefully” is because there has to be a question mark over whether the Hercules will be able to stand up to the work. Many of the personnel heading for Europe on this deployment will be tasked with trying to keep the plane in the air.

Historically speaking, this “cross fingers and hope” aspect to our Ukraine deployment is a bit ironic. As Werewolf noted a few days ago, on the last occasion when our armed forces had a significant presence in Europe, our M113 armored personnel carriers kept breaking down in Bosnia, and needed to be towed back to base by our British allies.

Down the years, our Defence procurements have often had a farcical element to them. Our Scorpion tanks that had driven down Europe’s autobahns in style fell apart in more demanding environments. Later, the Army’s armoured personnel carriers proved to be too big to fit into the air cargo planes meant to carry them to where they could be used. The Navy’s Danish-built logistic support ship the HMNZS Charles Upham proved to be so unstable in the southern oceans that it was quickly nicknamed the Charles Upchuck. And so on.

All this would be amusing, if the gear involved didn’t cost hundreds of millions of dollars better spent on public health and social housing. As mentioned in this column before…. For all its rhetoric about our traditional defence ties, successive National governments have systematically neglected the needs of the armed forces, and run down their equipment.

The Key government for example bled defence spending to its lowest point in recent years – 1.11% of GDP – and put the money into tax cuts instead. So much for patriotic flag-waving. The legacy of neglect by the Key administration is why New Zealand has remained saddled with those noble but decrepit Hercules aircraft, and with a public health system that was ill-equipped to handle a pandemic.

That’s why it took the Clark government to re-equip the Army after the Bosnia debacle, and it took the Ardern government to invest (a) in the new and mega-expensive fleet of Poseidon surveillance aircraft that will replace the Orions, and (b) in the new generation of Hercules aircraft that will eventually replace the old incarnation of the Hercules we are sending off to Europe. Under this centre-left government, the ratio of Defence spending has actually increased to 1.54% of GDP, ahead of Canada.

Yet who is currently out there waving the flag and touting the need to maintain links to our traditional battlefield allies? The National Party: even while it simultaneously dangles the lure of another round or tax cuts in front of voters.

One looks forward with interest to National’s shadow Budget this year. Some forward projections will need to be included. It will be fascinating to see how Christopher Luxon tries to juggle this supposed massive increase in Defence spending with a significant round of tax cuts. This was something his political mentor, John Key never seriously tried to do.

Footnote: Predictably, the Greens have expressed their disappointment at the deployment of the Hercules to Europe, apparently on the grounds that this marks an increase in the militarisation of our assistance to Ukraine.

For the record, the Ukraine deployment will not entail our armed forces using lethal weapons themselves.

The Greens position also seems inconsistent. Their Defence and Peacekeeping policy makes it clear that the Greens are not pacifists. Their Defence policy statement supports overseas military deployments authorised by Parliament, and requires our armed forces to operate in accord with the international law on armed conflict. Given that Ukraine is acting in self-defence, and given the evidence of significant atrocities being committed against its civilian population, it is very hard to see what there is to object to about this deployment, under international law. Self defence is legitimate. So is assisting it, against an armed aggressor.

The current terms of the Ukraine deployment have the added aim of helping to minimise the extent of civilian casualties occurring within Ukraine. The deployment does not preclude other forms of humanitarian aid, which are occurring in tandem. In sum, denying help to Ukraine’s people to better enable them to defend themselves would be an exercise in pacifism that even the Greens own policy does not support.

With our motor gone…

Given the state of our poor old Hercules, this song – which was ancient even when Ry Cooder revived it 50 years ago – seems appropriate.