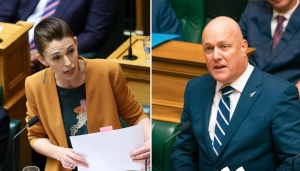 In recent weeks, barely a day has gone by without Christopher Luxon demonstrating the chasm of ability that exists between the leaders of our two major political parties. When his latest gaffe (on public transport funding) was politely pointed out to him by a NZ Herald journalist, Luxon replied : “ I haven’t really thought too deeply about it, to be honest.”

Maybe that should be National’s next election campaign slogan: “Thinking Is For The Liberal Elite: Vote National!” For a party that claims to disdain mediocrity, National appears to have elevated a prime specimen of it to its top position.

Before the public transport gaffe slides down the memory hole, it is worth keeping in mind what Luxon actually said. As he told the NZ Herald : “Fundamentally, it [public transport] has got to stand on its own merits…”

When reminded public transport has been heavily subsidised in modern times, Luxon admitted he had not thought deeply on the subject. “I haven’t thought too deeply about it, to be honest. I think the bottom line is, we want to encourage more mode shift,” he said… ”Public transport needs to stand on its own feet, it can’t be subsidised or underwritten right? It has to be able to build its own case.”

What are we to make of stupidity on this scale? Leave aside the fact that public transport already stands on its merits, by providing a public service, and by helping to combat climate change. Leave aside the fact that roads and politicians – and Air New Zealand, both now and while Luxon was CEO – are also all heavily subsidised. Look instead at the extra costs the public would be facing from what Luxon is proposing. Transport Minister Michael Wood has spelled out some of them:

“Under Luxon’s plan a multi-zone bus fare in Auckland would go from $12.60 to 31.50, in Christchurch a $4.70 trip would become $11.75, a train ride in Wellington would go from $19 to $47.50, and superannuitants would no longer be able to use their SuperGold Card to catch off-peak and weekend public transport.”

In all likelihood, Luxon would not really follow through and do what he just said. His modus operandi is gradually becoming clear. It follows this basic pattern: what Luxon says is almost beside the point, since the gaffe (once it has been detected by other people) will be quickly followed up by a scrambled attempt to conceal the meaning his words plainly conveyed.

Essentially, the details are merely the window dressing for the slogans that take up most of the rentable space inside his noggin. Such as: Government Bad, Private Sector Good. Regulations Bad For Business, Open Slather Good For Business. Unions Bad. Farmers Good. Landlords Very Good. Climate Change Hurt My Head.

Footnote: All the same, Luxon is posing as the champion of the people fighting the cost of living pressures. Yet that pose is wildly inconsistent with what he has actually been advocating, and opposing. As Clint Smith has pointed out, the list includes :

The double standard involved here is breath-taking. If a female politician said something as laughable as Luxon’s proposal on transport subsidies and defended it on the basis that she hadn’t thought about it too deeply, she would never survive the fallout. She would be roundly damned as a scatterbrain and a show pony, and deemed plainly unfit for higher office.

Yet because Luxon is a man in a suit, and because is the leader of a National Party that has always been suspicious of conspicuous intelligence, he is being enabled to continue on his bumbling way. Jacinda Ardern on the other hand, is held to a different standard. Obviously, there is and should be a range of opinions on whether her government is doing the right thing. Even people who routinely vote Labour criticise it on the details and pace of change it is currently overseeing.

However, much of the most vehement criticism levelled at Ardern has little to do with policy detail and a lot to do with her gender. Her competence – which includes a command of detail across the whole range of government activity, and an ability to communicate the details succinctly – is commonly held against her. In an excellent article on Stuff last week, Michelle Duff tackled that issue head on:

Two years into the pandemic, there is talk about the new normal. Here’s what that looks like. It is open misogyny, visible on every platform and supported and promoted by upvotes on Reddit, laughing emojis on Facebook, comments about “that woman” on LinkedIn, and someone who looks like your Aunty referring to the PM as “Cindy” and calling her a “c…”.

It is targeted and increasingly violent misogynistic abuse and threats – illustrated by but not limited to the escalation in gendered hatred directed towards Ardern – being directed at public-facing women from central and local body politicians to journalists, public servants, academics and chief executives.

Ardern is (a) the most prominent and (b) the most consistent target of the gendered hatred that Duff is talking about. Yet as Duff reports, the abuse and the escalating threats have a wider context:

The amount and tone of gendered disinformation and misogynistic abuse online has exploded since last August, constituting both a national security threat and a human rights issue that authorities are struggling to combat. It appears to be part of a concentrated effort to suppress women’s participation in public and political life, borne from far-right ideology designed to oppress women that has spread to a more mainstream audience.

It is a spectrum of abuse, and at one end it begins with the denigration intentionally conveyed by the use of the term“Cindy” to refer to the Prime Minister. As Duff says:

Some might find this funny, but its aim is to diminish. Massey University senior lecturer Dr Suze Wilson, who studies leadership, says no-one called John Key “Johnny,” or Chris Luxon “Chrissy,” in an attempt to infantalise or belittle them. “Right from the outset you had people saying “I don’t want to be told what to do by that woman,” with an element of “how dare she tell me what to do.’ That had to pre-exist for this to be possible.”

But that was petty compared to now. “What’s really tipped it is the more violent rhetoric. The straight out abusive terms, the c-word, the horse-face, the threats to kill. “It comes from this idea that if any woman comes into a position of power she’s not acting as a ‘good’ woman should – and that’s why this doesn’t only come from men, it comes from people who cleave to more traditional idea around gender roles…”

Like most of the rhetoric that characterises the anti-vaxx movement, the gun lobby and other parts of our public discourse, these extremes of politicised misogyny have been imported here from the United States – a country where religious beliefs permeate the perceptions of what are seen to be the appropriate gender roles.

I’m not implying that this alarming trend – and the double standard it entails -is the fault of Christopher Luxon. But he is definitely a beneficiary of it. Because if politics was a level playing field, Luxon wouldn’t be standing a chance against Ardern. On every conceivable measure of ability, he simply isn’t in her league.

Footnote: On that point, Luxon is often dismissed as being a John Key clone. That’s a mistake. Because what Luxon has been proposing are very hard right policies, and not the moderate centrism that enabled Key to be seen as an amiable, grinning placeholder acceptable to a wide range of voters. Instead, Luxon and David Seymour are trying to inject policies into the political mainstream that over the past 30 years, have enjoyed only about 5- 10% support at most. It isn’t a stretch to regard their “small government” extremism as having more than a little in common with the “That bitch can’t tell me what to do” extremism mentioned above.

Talking of feminist icons… Here are a couple of tracks by Oumou Sangare, the legendary singer, women’s rights activist, and business tycoon from Mali. By and large, the rich music heritage of Mali is mainly known to the outside world thanks to male artists like Salif Keita or the Tuareg band Tinariwen, and there is a (disputed) “griot” tradition that holds excellence in music to be a male preserve.

Regardless, Sangare, now 54, has been a star within Mali – and in world music beyond Africa – since she was 21 years old. Much of her music celebrates vocal styles (and musical instruments) associated with the rural south of the country where she was raised. But her mega-hit “Mali Niale” also integrates modern elements into a song that (a) celebrates women’s right to choose and (b) exhorts Malians abroad to return home and contribute to the nation.

Here, from a couple of weeks ago, is Sangare’s latest single “ Sira” ….

And for something quite different…the Swedish rapper/producer Yung Lean and the singer/dancer/songwriter/performance artist known as FKA twigs have joined forces on this restless ear worm. Just don’t try leaning out the window of a moving car like the man does in the video, kids.

Finally, this melancholy song by Ohio- born alt-country singer Arlo McKinley – a protégé of the late John Prine – has its merits, but the real star of the video are the graphics, drawn by Matt Reynolds.