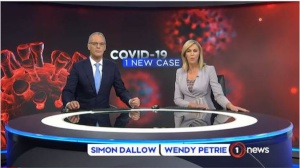 Quite justifiably, TVNZ has got a lot of stick on social media for the bizarre framing it used in last night’s 6pm nws bulletin to announce Dr Ashley Bloomfield’s resignation as Director -General of Health. “Love him or loathe him.” were the words with which the TVNZ newsroom chose to commence its report. Love is problematic. But who, apart from the fringe anti-vaxxers, actually loathes Ashley Bloomfield? As Russell Brown pointed out, the framing was indicative of a media tendency to treat the views of a tiny minority as if they were held by half the population.

In similar fashion, a vocal minority of endlessly disgruntled bar owners and tourism operators have commanded a weirdly disproportionate amount of coverage for the blame they continue to heap on the government’s Covid restrictions, as the cause of any and all the downturns that their businesses have experienced since early 2020.

What the angry hospitality sector/tourism minority and the angry anti-vaxxer minority share in common is their demand for all Covid restrictions to be removed, regardless of the impact on society and on the public health system. As if government support (via wages subsidies, short term absence payments, small business cashflow support schemes, events transition support payments etc. etc.) has not kept many of these firms afloat for the past two years. Many of the anti-vaxxers bewailing the tyranny of the Ardern government would possibly not even be alive today if not for the Covid restrictions and vaccination drives supported by everyone else. These restrictions continue to limit the spread of the disease, to a degree that remains the envy of the rest of the world.

Ordinary viewers, who – as taxpayers – have forked out hundreds of millions of dollars to assist these sectors through the worst of the pandemic can be forgiven for feeling exasperated at the extensive airtime devoted to these narcissists. Without a trace of irony, TVNZ and other media have run the whining calls by bar owners for the removal of all Covid restrictions right alongside stories about nursing shortages and Covid-driven burnout in the health system, as if these issues have no connection whatsoever.

In fact, the media treatment of a tiny minority as if they comprise 50% of public opinion is very reminiscent of the “both sides-ism” that used to plague the coverage of the climate change issue. It took the best part of a decade for the mainstream media to realise that it was systematically misleading the public by treating climate change deniers as deserving of 50% of the available air-time. The Covid media coverage – with its relentless amplification of the minority views of the wilfully disgruntled – has been repeating the same mistake.

To re-state the obvious: with respect to Covid, government restrictions (while imperfect) have existed for good reason. Including the border restrictions, they were put in place to buy time and to protect the public until double vaccination and booster rates reached a point where the health system stood a reasonable chance of still giving effective treatment to the infected.

Subsequently, as Covid restrictions have been gradually removed, it has become crystal clear that the ongoing problems of hospo and tourism are due to lingering public anxiety about travelling to and frequenting the kind of locations where they might catch Covid. In other words, the shortfalls in business activity are being driven by the pandemic, and not by the residue of government restrictions.

Over Covid, the National Party has been willing to dog whistle at every populist issue that pops up on the radar. Remember how nimbly National’s No. 3 ranked MP Chris Bishop shifted from slagging the state for its reluctance to pour money into creating purpose built permanent MIQ facilities, to launching a petition to scrap almost all our existing MIQ facilities because they allegedly constituted “state sponsored human cruelty?”

With a similar dedication to principle, Christopher Liuxon is now re-floating the idea that New Zealand should boost its defence spending to perhaps 2% of GDP.

National supports the idea of New Zealand lifting its level of defence spending, possibly to a level of 2 per cent of GDP…The OECD’s measurement of defence spending has New Zealand’s spend at about 1.5 per cent of GDP. Lifting spending by 0.5 percentage points would mean an increased spend of about $1.7 billion. Yesterday Act also challenged the Government to lift defence spending, drawing a searing rebuke from Prime Minister Jacinda Ardern that this could lead to cuts in public services, when combined with Act’s tax cut pledge.

Once again we’re getting 50 year old policies from the centre-right. National is advocating defence policies that are of Cold War vintage. Yes, the Ukraine invasion has increased public anxiety about the fragility of the international order. But on what realistic threat deterrent does Luxon think we should spend the money – and how would it make us any more safe? Imagine if when in opposition, the Greens had proposed spending oh, an extra $1.7 billion dollars plucked out of thin air on combating, say, the threat posed by climate change. The commentariat would have treated this as confirming all the usual stereotypes about the impractical idealism of those crazy Greens.

Maybe Luxon should be telling us what poses the more immediate threat to this country. Is it Russian/Chinese military aggression, or climate change? Climate change is real to everyone beyond the ranks of the National Party and its Groundswell spear-chuckers. But I seem to recall the last time the current government tried to impose a climate-change price deterrent on emissions-belching vehicles, National started screaming about a “ute tax.”