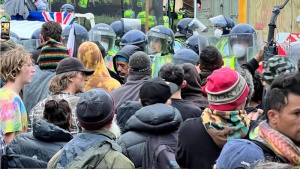 The protest encampment at Parliament long ago ceased to have any rational purpose beyond perpetuating its own existence. Social media has already condemned the way the protesters have put their children in harm’s way, and used them as human shields to deter and impede the clearance operation. It is hard to see (a) how this can end without the use of substantial force and yet (b) how the Police have any alternative but to move the protest encampment off Parliament grounds and adjacent streets. It seems unlikely the protest will be ended for good today, but reportedly “considerable ground” has been made by the Police. It is also unclear how the occupation once cleared, can be prevented from returning unless a substantial Police presence remains at Parliament.

Meaning: any sighs of relief from Wellingtonians that this toxic occupation will end for good anytime soon may be premature.

In the coming days, there is no doubt that Vladimir Putin and the overwhelming forces he commands will defeat Ukraine militarily. However, this Pyrrhic victory will succeed only in (a) reducing Ukraine‘s largest cities to rubble, (b) ruining the Russian economy and (c) sowing the seeds of a guerrilla resistance likely to tie down Russia’s occupation forces very expensively for a generation or more. Meanwhile, the rouble is cratering.

So much for Putin gambling on a quick and easy victory against a country that he had convinced himself wasn’t really a nation, but truly Russian at heart. Plan B is seeing Russia resort to the same ugly, scorched-earth tactics it used in Chechnya and Syria. (Think: Aleppo.) The entirety of Ukraine is being turned into a killing zone, with Russian forces shelling and bombing civilian centres indiscriminately. So much for the fabled “unity” and common identity that Putin, only a week ago, was claiming to be shared between Russia and Ukraine. Many of us have problems with our families, but we don’t commonly use cluster bombs to resolve them.

So where did Putin derive this pathological love/hate fixation he has with Ukraine? In a previous column, I argued that it was Putin’s mentor Alexander Dugin who created the geo-political vision behind Russia’s invasion of Georgia in 2008, and for its current conquest of Ukraine. This and the related strategy for the subversion of Western social democracies and the revival of Russian fascism is contained in Dugin’s 1997 book The Foundation of Geopolitics. Beyond that deep influence, it also seems important to keep in mind that Putin was in his impressionable twenties when Leonid Brezhnev was trying to “Russify” Ukraine by force and by persuasion during the 1970s. Brezhnev’s attempt at Russian cultural colonisation never really took root anywhere outside a few isolated pockets in the south and east of Ukraine.

There is statistical evidence to prove that point. Five years ago, polling evidence was showing that very few Ukrainians have ever shared in Putin’s fantasy about the Russian identity that the two countries allegedly felt in common:

In other words, the mindset of Putin in Ukraine in 2022 seems very much like the delusionary worldview held by US President George W. Bush in 2003 with regard to Iraq. Bush was another imperial invader who thought he would be greeted as a liberator, by a grateful people throwing roses. In reality, Russia’s prior aggressions (in the Crimea and in the Donbas separatist regions) had galvanised people who may have previously considered themselves as belonging to two nationalities. In revulsion at the threat posed by Russia, the vast majority of the public defined themselves as Ukrainians.

Even within the separatist regions, Russia’s fanboys had comprised only a small minority. Most respondents who still felt in 2017 that they belonged to two or more nationalities lived in the Donbas region. Yet even there, only 27% did so! The ratio was even worse in the southern (24%) and eastern (19%) regions – while in the west and centre of the country the sense of a split allegiance was felt by only a meagre 6% of the population. Language, always a key indicator of identity, told the same story. Over two thirds of Ukraine’s citizens (68%) considered Ukrainian to be their native language, 17% cited both languages ​​(Ukrainian and Russian), but only 14% of Ukrainians considered Russian to be their native language.

In sum, there is plenty of evidence to contradict Putin’s bogus claim that the two countries have a common heritage, and that it is Russian at its core. The evidence not only exposes Putin’s imperial lies. It also indicates that this strong sense of national identity will be hard to suppress entirely, even after it has been driven underground by Russia’s military victory.

Iraq is one recent example of how badly a brutal, deluded invasion can go wrong. But the more accurate precedent would probably be Israel’s invasion of southern Lebanon in the early 1980s. Like Russia today, national security was Israel’s excuse for invasion. Supposedly, the goal was to defend Israel’s northern territories. The invaders quickly drove on to the capital, Beirut, and set up a puppet regime led by a thuggish group of Christian Phalangist gunmen. After 15 years of bloody and aimless fighting against increasingly sophisticated (and well-armed)local guerrilla forces, the Israelis were forced to retreat and withdraw from Lebanon.

History may not exactly repeat itself. (Chechnya lost its own war of independence against Russian military might.) Even so, this current phase of conquest in Ukraine may actually be the easy part for Russia.

Olsen, and the Simpsons

Interesting profile in the NZ Herald of Brad Olsen, the media’s current go-to economist for instant hot takes on every aspect of economic performance. Pull quote from Olsen on this occasion: “I don’t know if working hard gets you a house these days,” he says. As the Herald article points out, Olsen has just turned 25. With approval, the article also says that this means Olsen – unlike many of his peers in the profession – has therefore had no direct experience of the neo-liberal reforms of the 1980s. One can only hope that he has some thoughts in his head about their lasting impact. What Olsen probably did grow up with was the Simpsons TV series. The half hour show was first launched on Fox in late 1989, seven or eight years before Olsen was born.

With regard to Olsen’s pull quote (about working hard not being enough these days to buy a house) the Simpsons family obviously belongs to a bygone era. They are a one-income family, with Homer being employed in a dead-end job at the local nuclear power plant. When the show was created in the late 1980s, it was evidently still credible that a working class male breadwinner’s salary could still enable a family to buy a house and sustain family life, plus a dog. Times have changed in the past three decades, as Olsen says, and not for the better.

Talking of which, we may also have misjudged Montgomery Burns. Despite all his other sins, Burns is still clearly paying a living wage to employees like Homer. And – the occasional three eyed fish aside – Burns is also running a nuclear facility that is helping to decarbonise the future. Smithers’ love may not be entirely misplaced.

This week’s playlist combines some 1970s world music with the new releases. Boomers will note the new track by 1960s folk music icon Judy Collins. At 82, she’s still sounding in fine voice, and the good times she sings about on this new track stretch all the way back to the Greenwich Village folk scene of 60 years ago. For yearsthe tragic life and works of honkytonk king Gary Stewart have been a personal inspiration, and Wednesday’s radical re-interpretation of Stewart’s biggest hit “ She’s Acting Single” gradually gets to the heart of the song’s grinding sense of self-loathing. Here’s the playlist: