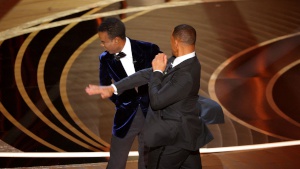 Uh oh. In an embarrassing case of counting chickens prematurely, the government had sent a delegation to Hollywood to capitalise on the expected Oscar coronation of The Power of the Dog. In the end, the film got only one win – Jane Campion as Best Director – from its twelve nominations. Could be wrong, but I think that makes it the first film since The Graduate ( 55 years ago!) to take home the Best Director award and nothing else. In fact, considering how Dune cleaned up the technical awards, Campion was possibly fortunate that the Academy had,in its infinite wisdom, chosen to exclude Dune director Denis Villeneuve from the Best Director category.

Sure, winning “Best Director” is a major achievement, in its own right. Campion is the third female director to win that award after Kathryn Bigelow for The Hurt Locker, and Chloe Zhao for Nomadland. However, Bigelow and Zhao both won Best Picture as well as Best Director. The softening of support for The Power of the Dog – and the shift to CODA as Best Film – had begun before Jane Campion’s self-aggrandising remarks at the Critics Choice Awards, a gaffe she compounded with an “ apology” that failed to mention why her comments had been so objectionable in the first place.

Campion’s comments alone probably did not cost her the “Best Film” award. Yet there is little doubt that the comments accelerated the drift of support away from her polarising film. “Polarising” being a key factor here. While The Power of the Dog had its fierce supporters, the preferential voting system in this category would have enabled those voters who just as fiercely disliked the film – and/or those voters who were appalled by Campion’s Critics Choice speech – to punish the film with a very low preferential ranking.

That combo may well have been fatal. Since 2009, “Best Film” has been the only category where qualifying members from all 17 branches of the industry get to vote, and it is also the only category that gets decided by preferential rankings and a series or elimination rounds, until one film has eventually accumulated 50% or more of the votes. In a tight race, second and third preferences can propel a film into the winners circle.

However you can’t entirely blame the general under-performance of The Power of the Dog on the preferential voting system. Look at those 12 Oscar nominations. The film failed to win support in ten of the other categories in which it was nominated as well, including one of them – Best Adapted Screenplay – in which it had seemed like a shoo-in ever since the awards season began. Meaning : our film delegation in Los Angeles may have its work cut out selling the merits of the industry via Campion’s film.

Footnote: So Chris Rock got slapped for jeering at Jada Pinkett Smith for her appearance, which is related to her medical treatment for alopecia. The chap from Victoria University who framed the incident on RNZ this morning as a free speech issue – ie. Smith acted with violence because he objected to something someone else said – was pushing a dubious line of argument. IMO, verbal violence directed at people who look unusual because of their medical condition cannot be reduced to one person’s valid point of view. This wasn’t a debating topic. Rock initiated the violence. (Sticks and stones may break your bones, but words can do lasting damage.)

If Smith had punched Rock, the ”violence” criticism might have carried more weight. In the circumstances, an open-handed slap made the point. (In previous centuries, it would have been with a glove). And yes, Jada Pinkett Smith herself could have got up and tried to explain to hundreds of millions of viewers why she looks the way she does, and why Rock’s “joke” wasn’t all that funny. But she shouldn’t have had that sprung upon her, in conditions where any verbal explanation would almost certainly have been self-defeating.

“Hey, it was just a joke” is the standard escape route for people who abuse others on the basis of their appearance or racial/sexual identity. Will Smith may not be the world’s most likeable human being, but he wasn’t the major problem here. Chris Rock was.

Iran on the brink

The regime in Iran is an ugly form of theocracy that long ago betrayed the ideals of the 1979 revolution. Yet Iran’s treatment by the West continues to beggar belief. During the last fortnight Iran – after more than 40 years of waiting – finally got compensation from Britain for the money paid by the Shah in the late 1970s, for 1,500 Chieftain tanks and 250 armoured vehicles. Britain delivered only 185 tanks, and pocketed the rest of the money.

Eventually, Iran held hostage an Iranian/British citizen (Nazarin Zaghari Ratcliffe) for six years to force Britain to pay the debt that it owed, but which Britain refused to pay – apparently, because paying up and freeing Zaghari-Ratcliffe any earlier would have put Britain offside with US President Donald Trump. Trump had imposed harsh sanctions on Iran after he scrapped the 2015 nuclear agreement intended to limit Iran’s development of nuclear weapons.

Ah, those sanctions. Iran had kept to its side of the deal, but once again, it was cheated. Iran never received in return the trade access to Western markets that it had been promised. Instead it got hit with economic sanctions that (a) crippled its economy, and (b) pushed it into a dependence on China, which proved willing to buy some of Iran’s oil. For the past year in Vienna, the Biden administration has been negotiating through a third party to (more or less) reinstate the original terms of the 2015 nuclear deal.

Earlier this week, there were positive signs that a final deal is imminent. However, the Americans are now reportedly baulking at Iran’s demand that its Revolutionary Guards – which it regards as a national army – be removed from a sanctioned list of terrorist organisations. It also wants some guarantee from the US that this time if Iran makes concessions, the US won’t then turn around again, and welsh on its side of the deal.

The Iranian people deserve better treatment from the West. After all, fighters from Iran (and its ally Hizbollah) were a big reason why the terrorists of Islamic State were defeated and driven from their strongholds in Syria and in Iraq. Iran is also home to millions of Afghan refugees from the US war in Afghanistan.

More immediately, the global economy needs to see the price of oil come down. In the wake of the war in Ukraine, Europe is trying to wean itself off its dependency on Russia’s oil and natural gas. Having access to Iran’s oil and natural gas would speed that transition, and it would also bring about an immediate and significant reduction in the price of energy – not only in Europe, but everywhere else in the world, including New Zealand.

In timid compliance with the US sanctions on Iran, New Zealand has given up our strong and growing trade with Tehran ( worth $100 million plus annually) that we had developed for our farm produce – mainly in beef and dairy. If a deal is signed in Vienna, we could quickly reinstate that valuable trade, and achieve lower petrol prices to boot.

All it would require is that the US recognises that it owes Iran some concessions for keeping its side of the 2015 nuclear deal, some gratitude for the joint victory over Islamic State, and some need to compensate ordinary Iranians for the serious harms done to them by the Trump era of sanctions.

To repeat: besides the harms done to ordinary citizens, all that Trump’s policies managed to accomplish was to turn Iran into a platform for China’s ambitions in the Middle East. Right now, New Zealand should be doing its best to convince the Americans that we all have a stake in getting this deal in Vienna signed, sealed and delivered.