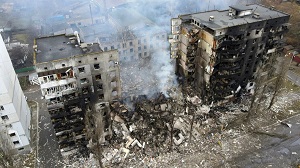 Against its will, the world has become conditioned to driving by acts of genocide and peering at them through the window with alarm – before driving on home to dinner and a relatively untroubled night’s sleep. The heinous wars in Yemen and Syria, Afghanistan handed over to the Taliban, the death of democracy in Hong Kong, a million Uighurs in concentration camps… And now, Ukraine. Bad things keep on happening to innocent people. As the satirical headline on the Reductress website put it: “Russia Starts War Despite Us All Having a Lot Going On Right Now.”

Sure, we can all admire the bravery of ordinary Ukrainians, and European leaders gave Ukraine’s president a standing ovation, but none of the fine words and sentiments alter the reality on the ground, where the Ukrainian people are being slaughtered. NATO cannot even bring itself to declare a ‘no fly’ zone anywhere in Ukraine, for fear of provoking the thugs in the Kremlin. For its part, Russia appears intent on “saving“ Ukraine by burning it to the ground. It will then be rebuilt as a prison camp, like Belarus. There may even need to be a wall or fence built, between occupied Ukraine and Europe.

Meanwhile, we can see everything, and can do nothing. Nothing beyond, say, sending a donation to help re-settle the few Ukrainians lucky enough to get out alive.

Home on the rage

Much the same sense of fatalism has permeated the reactions to events here at home as well. Earlier this week at Parliament, it had been difficult to imagine any other conclusion – given how polarising the protest had become, and given how provocative the actions of some protesters had been, for weeks on end. Having come this far, the protesters couldn’t back down and go home of their own volition, empty-handed. In the end, their shapeless anger met organised force head-on and not surprisingly, they lost that contest. For all the talk on camera about it being unreal that such scenes were happening here, it also seemed naïve to think that they wouldn’t happen here.

With the wisdom of 20/20 hindsight, some armchair critics have since blamed the Police for not intervening on day one to stop the protesters from setting up camp. Such action would have been premature, and intolerable. An early Police onslaught would have just confirmed and promoted the protesters’ core fantasy, that this government is a jackbooted tyranny. It required the 23 days of mayhem to give the Police a sufficiently strong public mandate for their final operation. Ironically, some within the protest encampment had indicated that they wanted to hang politicians – yet, given enough rope, they managed to hang themselves, at least in the court of public opinion.

Since then, Speaker Trevor Mallard has put forward another one of his tone-deaf ideas, this time about the future management of the precinct. He has suggested that a security wall be built around Parliament, to prevent anything similar from happening again. By doing so, New Zealand would sacrifice what is uniquely open and accessible about our Parliamentary precinct. Mallard’s idea was overkill. After all, Parliament itself had continued to function largely as before, behind its own wall of Police protection.

In reality, what had disrupted public access and business activity in the surrounding areas had been the weaponizing of cars and vans as tools of obstruction. Over the coming months, Mallard would be better advised to create (with Police help) a procedure for the speedy removal of obstructive vehicles. Basically, the public want to see the grounds of Parliament restored, not put off-limits to them and their families for good. Moreover, if autocrats like Mallard got their way and built their wall, you can bet that any future protest of any sort would be very lucky indeed to get through the gates of Parliament. Yet it is not their Parliament, it belongs to us all. But we may have to struggle to keep it that way.

Yes, these protests were different. But the notion that protesters should make their point and then go home is an admirable, but somewhat middle class notion. It allows people to protest when their values are infringed upon, but expects them to resume their reasonably comfortable lives once the protest march is over. In other words, such protests are optional, not existential. Without excusing the protesters’ actions in any way, it is different when there has been an intergenerational sense of being ignored, and where the relative lack of opportunity may be officially lamented, but is still treated as the natural order of things.

For such people, Covid has sharpened their sense of being shut out of society’s reward systems. This feeling preceded vaccine mandates. This week, it resulted in a nihilistic rage being directed at the Police – who did not create society’s imbalances, but who are the most visible guardians and gatekeepers of the settings that keep generating them. In the end, some of the protesters left their tents and belongings on the lawns of Parliament, but many will have taken their rage home with them.