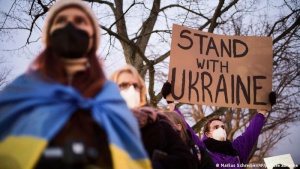 The Achilles heel in the West’s punitive sanctions against Russia has always been pretty obvious. Russia may be highly dependent on its oil and natural gas exports – but alas, Europe is just as addicted to cheap Russian energy. Germany for instance, relies on Russia for 40-45 % of its energy needs. Therefore – as Werewolf recently pointed out – the US/European sanctions packages have carefully exempted Russia’s energy deals from the sanctions regime, mainly by trying to identify and prevent the energy transactions in the SWIFT international banking system from being caught up in the sanctions. As a result, the sanctions part of the West’s response has been far less effective than the asset freezing actions that have been taken against the war chest that Vladimir Putin built up in Russia’s central bank, in preparation for the invasion.

You can look at this World Trade Organisation chart and see just how vulnerable and dependent the Russian economy is/was – even pre-invasion – on its gains from oil exports. (They account for nearly 40% of its entire export gains.) Yet over the past 48 hours, the mere talk of banning all imports of Russian oil has sent international oil prices, which were already on the rise, right through the roof. This is having a perverse outcome. In short, Russia is being rewarded for its aggression against Ukraine, by winning ever higher prices for its main export commodity. So high in fact that the energy returns virtually cancel out the West’s sanctions in all other areas.

That’s the current dilemma. How much more pain at the petrol pump is the US/EU/UK and other countries (like New Zealand) really willing to endure to stand in solidarity with the sufferers in Ukraine? Not much more, probably.

Footnote One: A crisis can create strange bed-mates. For example, the US has just sent a friendly delegation to Venezuela, normally seen by the US to be a card carrying member of the axis of evil. The US aim this time is to see if Venezuela might see its way clear to use its oil production to help out the West – and not Russia – if push comes to shove on a boycott of Russian oil.

Footnote Two: New Zealand has just passed legislation creating a two tranche regime of sanctions against Russia and Putin’s oligarch pals. The legislation has been purpose built to apply to the Russian aggression against Ukraine, but not beyond it. In the background, the bureaucratic work will continue on a so-called “autonomous” sanctions Bill which will be a one-size-fits-all exercise, to be taken in future in unison with our allies and applicable to a wider set of situations.

The current government has felt deeply ambivalent about that wider “autonomous” Bill. For all its talk about the value of international norms, this government likes to maximise its freedom to pick and choose when it will act in unison with our traditional allies, and when it won’t. The subtext here is China. If China ever does invade Taiwan or takes other overtly aggressive actions in the region, New Zealand will probably have to go through this same laborious purpose-built sanctions exercise as it did over Ukraine. Simply because on such matters – even within the Five Eyes context – we prefer to retain the trade-driven option of hiving off and making friendly gestures to China.

This isn’t entirely a matter of shallow self-interest. You could argue it makes some sense – especially while Peter Dutton is Australia’s Defence Minister – to give ourselves as much flexibility as possible with respect to whatever Canberra may have on its mind.

Footnote Three: Almost the entire developed world has joined in the sanctions response to Russia, but Israel has been a striking exception. This is not simply because of the similarities – pointed out before by Werewolf – between Israel’s occupation of Palestine and Russia’s mission of occupation and subjugation in Ukraine. Israel’s ambivalence can‘t simply be explained by the hundreds of thousands of politically conservative Russian Jews who have emigrated to Israel, while still retaining at least some of the Russian nationalist sentiments that drove the Ukraine invasion. There are also quite large numbers of Ukrainian Jews who might now wish to re-locate to Israel, with Russia’s agreement.

These and other reasons for Israel’s muted response are set out here. Within Syria, a complex and delicate agreement reportedly exists between Russia and Israel over the terms and conditions under which Israel can attack Hezbollah positions, without endangering personnel at Russian military installations inside Syria, and without jeopardising Russia’s overall mission objectives in that country. If Moscow is offended, all of the above could become problematic for Israel. And for its leader Naftali Bennett, who flew to Moscow last weekend for a three hour meeting with Putin. Washington may be Israel’s main sponsor, but it will probably wait in vain for a full debrief on the contents of that meeting.

Footnote Four: As the refugee problem on Ukraine’s multiple borders with Europe intensifies, this situation should – at the same time – be reminding us of the desperate plight of refugees, worldwide. If all the world’s 84 million refugees were united in one country, they would comprise the 17th or 18th biggest country on Earth. That’s an indictment of how little has been done to address the dislocations caused by conflict, by gross inequality, by the need for water, food and shelter, and by climate change.

New Zealand’s per capita and per GDP intake of refugees has been miserly for decades. Countries in Europe (and the likes of Canada) have opened their doors and homes to refugees from Ukraine – and before that, to refugees from Syria – on a scale that makes our response look meagre, and shameful. The community sponsorship schemes that have been the hallmark of (a) Poland’s response to Ukraine and (b) the response by Germany and Canada to the Syrian refugees have still barely got off the ground here. The numbers allowed in by New Zealand under such schemes are vanishingly small, and the qualifying criteria have been set ludicrously high:

The main applicant must have a good level of English, a tertiary qualification and three years’ relevant work experience. That has drawn criticism from Amnesty International, which is otherwise a keen advocate of community sponsorship. Its executive director Meg de Ronde said it shut out people who had not been able to continue in work or education.

More often than not, as de Ronde points out, it will be women who will not meet the threshold criteria:

“…Often those people are women, are women with children, women who have been widowed, and who may not have had access to those types of education or work that’s required. We are thrilled to have the programme, but as always it should be a humanitarian programme that has the broadest possible grounds.”