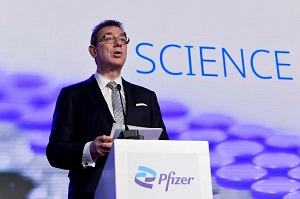 As the Omicron wave sweeps across the land, here’s a quick overview of some of the latest vaccine news and research findings.

…We are developing a vaccine, new version of our vaccine, that covers both, the old variants and Omicron, at least twice as good as the previous one. And those data also will become available towards the end of this month and maybe early next month. And then there are programmes that are working on pediatrics that also will be completed next month and will be submitted. And then a little bit longer term, but hopefully not that long, working on a yearly vaccine that can replace the current versions and get us to a routine that it is acceptable by the majority of the people.

In other interviews, Bourla made it clear that Pfizer’s new vaccine has targeted the BA. 2 Omicron variant. The new vaccine will aim to extend the period of protection against infection (and serious complications) out to a year. This is in recognition of the fact that the current two shot-plus-booster regime wanes in effectiveness after only a few months.

A new study by the Centres for Disease Control and Prevention (CDC) and Abt Associates shows that the Pfizer-BioNTech COVID-19 vaccine is moderately effective against the Omicron variant for children ages 5-15. It reduced the risk of infection by 31% for children 5-11 and by 59% for children 12-15.

To repeat: that’s an efficacy rate (against infection) of less than a third of children 5-11! Even so, the study did find that there were downstream benefits: “Vaccinated children spent less time sick in bed than unvaccinated children with an Omicron infection. “

This CBS interview with Pfizer CEO Albert Borla contains a long passage about the efficacy of vaccines for 6 to 16 year olds, and also about the company’s plans to have a vaccine for children aged six and under by the American autumn this year.

AAT is a naturally occurring human protein produced by the liver and released into the bloodstream which normally acts to protect the lungs from the destructive actions of common illnesses. In this randomized controlled trial, AAT that had been purified from the blood of healthy donors was administered to patients with COVID-19-associated ARDS, with the aim of reducing inflammation.

The results indicated that treatment with AAT led to decreased inflammation after one week. The study also found that the treatment was safe and well tolerated, and did not interfere with patients’ ability to generate their own protective response to COVID-19. This discovery suggests a potentially important role for AAT in the treatment of ARDS and other inflammatory diseases associated with COVID-19.

New Zealand has conditionally ordered some 60,000 doses of molnupiravir :

The agreement with supplier Merck Sharp & Dohme (MSD) is subject to the drug being approved by Medsafe. An initial supply of 60,000 courses will be sent to New Zealand after Medsafe approves the drug, Pharmac chief executive Sarah Fitt said in a statement.n “MSD recently announced trial results showing that molnupiravir considerably reduced hospitalisations and deaths from Covid-19. While these are interim results, they are very promising,” Fitt said.

This is an optimistic gloss on molnupiravir’s abilities, and one not widely supported by the US evidence. For example, as the Fierce Pharma drug industry news site pointed out last weekend:

While an authorized antiviral, molnupiravir — co-developed by Merck and Ridgeback Biotherapeutics—is not the preferred therapeutic for Covid-19 infected individuals unless a patient has a contraindication to other therapeutics. A lower efficacy than Paxlovid, inherent safety concerns, and a consequently divided FDA Advisory Committee meeting meant that molnupiravir moved down the treatment schematic for Covid-19. However, in times of shortage, it remains the only option for several states.

The other concern is that molnupiravir’s already limited efficacy appears to decline the further into the infection the patient is before receiving the medication. If those 60,000 doses are going to be eventually distributed to be administered in a hospital setting this will mean – almost by definition – that the pill will be of limited effectiveness to already infected patients whose condition has landed them in hospital. Possibly, it could be of some use as a preventative medication to frontline staff who may notice symptoms and be able to access the anti-viral pill ASAP.

Looking further ahead, the research and development field for anti-virals seems to be opening up beyond Pfizer and Merck. Earlier this week, the AbbVie pharmaceutical company and Scripps Research, an independent, non-profit biomedical research and drug discovery institute, announced a global collaboration to develop potential novel, direct-acting antiviral treatments for COVID-19.

Is a fourth dose necessary?

The CEO’s of the two main drug companies that have been at the forefront of mRNA vaccine research and delivery – Moderna and Pfizer – have been taking different positions on whether and when a fourth dose might be necessary. Pfizer CEO Albert Bourla thinks it is, based on the desire to increase the time period that the vaccine can still offer substantial shield against infections:

“The protection that you are getting from the third, it is good enough, actually quite good for hospitalizations and deaths,” [Bourla] told “Face the Nation.” “It’s not that good against infections.” The CEO’s comments referred to “early and preliminary” data from a study Pfizer unveiled in January, which is assessing a fourth dose of the company’s authorized vaccine plus an omicron-targeted shot, a company spokesperson told CBS.

Moderna CEO Stephen Hoge on the other hand, is far less gung- ho about the need for a fourth vaccine shot:

Speaking with Business Insider, the executive said that “[f]or those who are immune-compromised, those who are older adults, over the age of 50 or at least 65, we want to strongly recommend and encourage [a fourth shot], the same way we do with flu vaccines.”For everyone else, a fourth dose should be left as a matter of choice, Hoge said.

“Is it necessary? I think that’s a strong word. I think it will provide a benefit to anyone who gets it,” he said. Hoge’s comments echo those made by Anthony Fauci, M.D., at a White House press briefing last month. At that time, the National Institute of Allergy and Infectious Diseases director suggested underlying health conditions may be the determining factor in whether a person needs a fourth COVID shot.

Clearly, this fourth shot is still an open debate, and one that’s relevant to New Zealand, as we head into the winter months on the back of our two shot-plus-booster protection regime. Before year’s end, Pfizer seems likely to have a fourth shot offering year round protection against infection (against all currently known variants) on the market. Will New Zealand be interested in buying it?

Campion and the champions

So Jane Campion has apologised for her “thoughtless” denigration of the Williams sisters at the Critics Choice Awards.

Venus and Serena, you’re such marvels. However, you don’t play against the guys, like I have to.

Yet strikingly, nothing in the apology or in the accompanying press release – which cites the personal achievements of the Williams sisters, and the number of titles they had won- addresses the elephant in the room. Namely: the dismissal of systemic racism.

It is as if Campion still cannot grasp what made her original comment so objectionable. As a rich white woman battling against sexism, her response in her moment of triumph was to belittle the achievements of women of colour. Even in her apology/press release Campion did not acknowledge the racism that Serena and Venus Williams have had to battle for their entire careers, starting even before the infamous incident at the Indian Wells tournament when Serena was only 19.

The hostility to Serena in particular did not abate as she won more and more titles. If anything, the resentment at her pre-eminence only grew. At least when Campion is making a film there are not 15,000 people applauding her every mistake. Has Campion had to fight harder for her due recognition than Serena Williams has had to do? That’s a false question.

Both have had to struggle, but the battleground is different, and again, Campion did not seem able to acknowledge that her white privilege has insulated her against the reality that Serena and Venus Williams have had to confront. You have to wonder what on earth got into Campion’s head that induced her to place her own struggles against sexism as being of a higher order than those waged by women of colour in other fields of endeavour.

Will this episode affect the Oscar voting? Arguably, it should. But such is the current momentum behind The Power of The Dog, the consensus among film industry commentators seems to be that it won’t matter to any significant extent.

Footnote: For what its worth, one of my own misgivings about the film’s narrative revolves around the characterisation of Phil, the hyper-male villain of the piece, who is shown to be secretly gay. Can we really be willing in 2022 to applaud a film that depicts hyper-masculine people as really being in the closet, and that gayness is an aberration born of their underlying anxieties and past history of grooming by an equally hyper-male mentor?

One can easily understand why Campion – and many other people – might find hyper -masculinity to be repugnant. But yoking it together with gayness seems a reactionary point of view. IMO, the anachronistic identity politics of this film can’t be excused by the fact it is a period piece. Not that any such misgivings will make any difference to the Oscar voting, either.