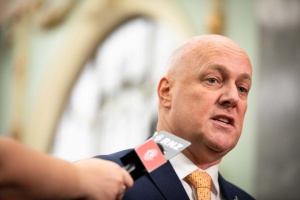 Like a broken record, National Party leader Christopher Luxon is offering a 40 year old formula of tax cuts that (inevitably) will be paid for over time, by cuts to public services. His tax cutting plans would hugely and disproportionately benefit the top 3% of the income elite to which he personally belongs. Moreover, as an owner of seven houses, he would also stand to benefit from the proposed reduction (from 10 years to two years) of the “bright line” test brought in to restrain the relatively tax-free buying and selling of housing properties. Property developers owning multiple properties would also gain significantly from the renewed ability to write off interest deductions.

Here’s the gist of the Luxon package:

The larger gains accruing to the elite rich would come from the scrapping of the top tax rate altogether. Making 30 % the new top tax rate would -reportedly – benefit the lucky members of Luxon’s income bracket to the tune of some $8,000 a year, or ten times what the struggling middle class stand to gain from National’s plan. According to IRD estimates, this scrapping of the top tax rate would cost the country $2 billion in revenue annually. It would involve a huge wealth transfer upwards, to the already wealthiest group in this country. That money will no longer be available to spend on social services. But hey, it would help the top 3% to get back on the ski slopes of Chamonix and Aspen, now that the borders are finally re-opening.

Jam Today, for a price

Luxon is claiming that the money for his tax cutting spree will come out of the government’s current operating allowance, somehow without cutting existing social services, and (somehow) without pouring more gasoline onto the inflationary fire of rising prices. Yet such claims are voodoo economics. Unless there is some magical way of spending the same money twice, the diversion of tax revenue will inevitably reduce the investment in public services now, and in the future. Outgoing Auckland mayor Phil Goff has already explained how Luxon’s proposed scrapping of regional fuel taxes would either mean crucial city transport infrastructure projects would not go ahead, or rates will have to rise by ten per cent to pay for them. Oh and obviously, since they further enrich the rich, National’s tax cut plans would fuel social inequality.

To repeat: these personal gains at the top would be ten times the pittance paid to the middle class battlers on $55,000 who would receive only $800 extra a year, or $15.38 a week – which is significantly less than what it costs these days to buy a 1kg block of cheese. There would be nothing much at all for the people at the bottom.

So far though, National has won applause from business leaders for being willing to address the problem of tax brackets. Yes, inflationary creep is pushing some people up into higher tax brackets without much gain to their living standard or much increase to their purchasing power. Even so, National’s plan would only tinker with the problem. That’s because the benefits to ordinary income earners would be so meagre when compared to the gains made by those on the top rungs of the income ladder – and because inflation is already making those paltry gains all but meaningless.

Genuine progressive reform of the tax brackets should start at the bottom, not at the top. It will be interesting to see if Finance Minister Grant Robertson uses this year’s Budget to reform the tax brackets in a fairer and more equitable fashion. At the very least, the Budget will surely need to contain some increase in benefit levels and/or a more comprehensive system of tax credits for the poorer people and families that the Luxon plan so pointedly ignores.

To re-state the obvious: Luxon’s toxic package would see a National government make a virtue once again out of under-investing in public health, housing, transport and climate change mitigation. Why, expecting the government to tackle any of those problems, Luxon suggested in his speech, would be tantamount to the Labour Party’s embrace of “socialism.” Really ? Elsewhere in the world, the leaders of modern mainstream parties in Europe have been known as democratic socialists for the past 50 years or more. In 2022 though and as Ukraine burns, Luxon was willing to use his speech to link the Ardern government to Moscow, and this evokes – in effect – the notorious images from the Muldoon era, of Labour as the party of dancing Cossacks.

There’s a price in credibility for doing so. Over recent decades, the surrender to neo-liberal economic policies (and to the related rhetoric of distrust of government resulted in the systematic degradation of the public health system. This left New Zealand unprepared for the pandemic. Yet as has so often been the case in our history, it took central government to come to the rescue of the wider public and of the private sector, and bail us all out. Arguably, it has been the inefficiency, short tern greed, and general incompetence of this country’s private sector that has so consistently failed New Zealanders, and not the evils of Big Government.

Most New Zealanders support the social contract. They’re pretty happy to pay taxes if it means they receive a range of high quality social services in return. Tax revenues are what (supposedly) enables us to pay nurses and teachers properly for the essential work they do. Catering to their needs is – to most voters – far more important than catering to the needs of the property developers and plutocrats who seem the chief areas of concern for Christopher Luxon.

Footnote: Finally there’s this factor. Investing wisely in public services and crucial infrastructure appears to be beyond the skillset (or the inclination) of the National Party front bench. By and large, National gives every impression of despising the whole idea of forward planning by the government. Far easier for it to buy votes with the sugar hit of tax cuts. National has never really moved beyond Thatcherism. It is still peddling tax cuts for the rich, harsh welfare cutbacks for the poor, and a few crumbs from the top table for the middle class.

The rest of the world has recognised the social and economic bankruptcy of that approach and moved on. It’s time we did, too.