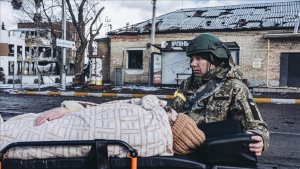 It is pretty safe to assume that the Kremlin did not expect Ukraine’s resistance to be as strong and effective as it has been. It is also probably safe to say that the failure of his Ukraine blitzkrieg will not significantly change whatever Vladimir Putin will come to regard as being “Mission Accomplished.”

What might Putin’s exit scenario in Ukraine actually look like? Some optimists think he has only limited gains in mind. If so, the list of pre-conditions for a Russian exit strategy might conceivably include the formal ceding of the Crimea, and the Donbass region of eastern Ukraine. These regions would no longer be ruled from Kiev.

Secondly, there would need to be a formal declaration of neutrality by Ukraine, forever renouncing any intention to become a member of NATO. This would be something of a bogus declaration since (a) Ukraine was not united on joining NATO until Russia invaded and (b) many key members didn’t want Ukraine in the NATO alliance, anyway.

Oh, and (probably) there would need to be regime change in Kiev with the current government of Volodymyr Zelensky either being killed, stepping down and going into exile. In tandem, the Russian negotiators would probably demand that the West must agree to lift all sanctions imposed since February on the Russian economy.

Such a package would be premised on the optimistic view that Putin can be convinced to end the war on such terms. The pessimistic view is that Putin will press on at whatever cost, until he has achieved complete military domination of the entire country. He would then install a puppet government along the lines that exist in Belarus and Chechnya. Any ongoing resistance would be brutally suppressed. In short…. Under this scenario, Ukraine would become a killing field, at whatever cost to its people. And at whatever cost to the Russian military, and to the Russian economy and Russian people.

All other considerations aside, running an army of occupation in a country as large as Ukraine would place an enormous strain on the Russian military, and the annual cost would severely stretch an already beleaguered Russian economy. By some reports the “oligarch” tier of the Russian economy has lost a total of $US91 billion over the past year, with some of those losses being incurred well before the invasion. It is not as if Russia’s recent economic woes have all been due to the invasion.

However, putting sustained pressure on the oligarchs would require the West to show a willingness to mount global crackdowns on the operations of tax havens and the shell companies that use them. That seems pretty unlikely. So far, not even the revelations contained in the likes of the Panama Papers have resulted in significant reform of the tax sheltering and money laundering activities that remain rife in the havens. That’s because the practices in question are embedded in the workings of mainstream multinational business practice.

New research suggests 40% of multinational profits are shifted to tax havens and that 10% of the world’s largest multinational firms are responsible for 98% of this activity; The result is $200 billion in lost global tax revenue…

Not all the havens for the ill-gotten gains of the oligarchs are located in the likes of Switzerland, Cyprus or the Caymans, either. Some of the world’s most lucrative tax havens are located in US states like South Dakota, and in Joe Biden’s home state of Delaware. All of which suggests that we may be waiting for quite some time before the sanctions against the oligarchs generate sufficient pressure for them to even consider mounting a palace coup in Moscow.

Footnote One: Dictators do not have a reverse gear. Back-tracking is usually taken to be a fatal sign of weakness. For example: Nikita Krushchev, one of Putin’s predecessors in the Kremlin, prudently backed down (rather than cause a thermonuclear war) during the Cuban Missile Crisis of 1962. For doing so, Kruschchev was quickly turfed out of office by the Politburo, and was considered lucky to have escaped execution.

It is hard to imagine that Putin would be shown similar clemency. Meaning: his own survival prospects will probably lead him to persevere with a maximalist war of attrition in Ukraine.

Footnote Two: At home, Russians are already experiencing hardship after being suddenly unplugged (overnight) from the global economy. This can only erode the public tolerance of Putin’s authoritarian regime. Until now, the justification for his dictatorship was that it was delivering to ordinary Russians a degree of economic stability. Along with it came a standard of living widely considered to be preferable to the conditions that existed in the more socially liberated but economically volatile period of the 1990s. The Ukraine war has torpedoed that trade-off. Now and for the foreseeable, Russians are facing a doubling down in repression, alongside a steep increase in economic hardship.

Footnote Three: Besides the carnage inside Ukraine , the invasion is sending the Russian economy into deep recession. There’s no obvious way out of this situation. The war is motivating Europe, long a prime market for Russia’s main exports (oil and natural gas) to go on a crash course to diversify into renewables, in order to satisfy its energy needs. Obviously, that trend will weaken Russia in the medium to long term.

Already, the Ukraine conflict is increasing Moscow’s dependency on China, and on the Emirates. Meaning: in no way will Putin be able to recreate the glorious czarist empire of days gone by. Quite the opposite. His actions in Ukraine are serving to underline the decline of Russia as a serious economic and military power.

For that it is worth, New Zealand ranked tenth in the last week’s UN World Happiness Report of 2021, a global index of economic and social wellbeing that measures factors (income, life expectancy, generosity, corruption, freedom and social support) that go far wider than mere GDP per capita.

New Zealand ranked just ahead of Australia (12th). The list was topped by the social democracies of Finland, Denmark, Iceland, the Netherlands, Switzerland and Sweden. Conversely, Venezuela, Afghanistan and Lebanon recorded the steepest declines in happiness. Overall, the UN Report found the following to have been true about life on Earth during 2021:

There has, on average, been a long-term moderate upward trend in stress, worry, and sadness in most countries and a slight long-term decline in the enjoyment of life.

Unintentionally, the UN Happiness Report also revealed the chasm that exists between the quality or life in Israel (the 9th happiest place on earth !) and the wretched quality of life experienced in the Palestinian Territories. Under Israeli occupation, the Palestinian Territories qualify for a ranking of 122nd in the world, alongside some of the poorest and most oppressed countries in Africa and the Middle East. Truly, Israel is a happiness apartheid state.

Arcade Fire’s mixture or U2 sized bombast and rampant melodicism has been a polarising experience from the outset, and the years have taken their toll. On the brink of their sixth album release, foundation member Will Burlet (brother of frontman Win Butler) has announced his departure from the band. The future commitment of multi-instrumentalist Richard Reed Parry is also somewhat unclear, given his recently announced array of side projects.

Yet among the certainties of life with Arcade Fire is the galaxy sized, arena filling scope of the music. In the first single from the new album, Win Butler strides fearlessly into battle with a battery of wind machines and any number of CGI generated extreme weather events, all of which have been enlisted in the service of getting your foot tapping and your head nodding in time.

Your call as to whether the end product is exhilarating, or exhausting. Live, I’m sure they’re still a great band. On record though, bombast on this scale is pretty hard to bottle.