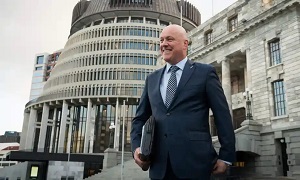 For years, Nicola Willis and Chris Bishop have been routinely described as belonging to the “liberal” wing of the National Party, as if National is a broad church spanning urban neo-socialists at one end of the political spectrum, and rural conservatives at the other. No-one has ever felt much inclined to ask Bishop or Willis whether the “liberal” label has ever meant anything much more than them being relatively young, relatively nice and not in favour of outlawing abortion.

The usual catch phrase is “socially liberal and economically conservative” a concept broad enough to include John Key as well. Supposedly, Willis and Bishop – while reliably Thatcherite on fiscal policy – do not share much more than that in common with the beneficiary bashing, lock ‘em up wing of the centre-right.

It may be time for a lot more in the way of transparency. Now that Willis and Bishop occupy the second and third rungs on the National ladder they need to start spelling out what effect (if any) their allegedly kinder worldview will be having on the party’s socio-economic direction. Asking Willis and Bishop to validate their niceness credentials got added urgency yesterday, after their leader publicly wrote off the poor as engaged in “bottom feeding.” Here’s Luxon on Kerre McIvor’s radio show, describing the priorities of the party he leads :

‘If you want to have a go, and you want to make something of yourself — we don’t just do bottom feeding and just focus on the bottom. We focus on people who want to be positive and ambitious.’

The link is here, and the section quoted comes at about 32 minutes in. Apparently, Luxon thinks the poor lack the “ambition” and the“positivity” of their social and economic betters. Has Luxon ever actually met a poor person? If he had, he would know that the vast bulk of them do not lack ambition for themselves and their kids. Nor are they lacking in the“positivity” and ingenuity that hundreds of thousands of them display every day as they make the best of it for themselves and their loved ones, on a sliver of Luxon’s income.

Let’s be clear just who it is that Luxon is writing off here. His “bottom feeding” category includes the people who stack the supermarket shelves and run the checkout tills, the nurses who care for the aged, the cleaners, the security guards, the people who drive ambulances, the baggage handlers, the teacher aides, the people who take out the rubbish and the people who serve him his coffee. Plus every solo parent trying to raise a child on a benefit, everyone on a sickness benefit or everyone suffering with mental health problems.

Those are the people that Luxon, in an unguarded moment of candour, has chosen to write off. Frankly, there could hardly be a less credible champion of the people trapped in a “cost of living crisis.” Not only does Luxon think that policy should not concern itself with such people, he appears to hold them in active contempt. Well, that explains why he and the party he leads have opposed minimum wage increases, fair pay agreements, and any significant increase to benefits – , while busily promoting tax cuts that would vastly and disproportionately favour the already wealthy members of society.

Are these views also shared by Willis and Bishop? Will it be these Thatcherite economic and social policies that Willis will now be happy to promote in her new role as shadow Finance Minister? Now that these alleged liberals have moved up to very senior positions in the party, will they be promoting a more inclusive vision, or will their previous liberal views now be discarded, as an indulgence of youth? In the year 2022, does being a National Party “liberal” mean anything other than early 19th century economic liberalism?

On Morning Report this morning Luxon indicated that by “ bottom feeding” he was referring to people on benefits. He tried to sugar coat that statement by conceding that most of them were law abiding, and played by the rules, before condemning the“ negative” focus on assisting such people – allegedly at the expense of middle New Zealand.

Wow. Can this really be the same politician who has been roundly condemning the divisions that have emerged within New Zealand society, and who has been calling for leadership that will bring us all together? He has just trashed the people in most need, in the process of celebrating an empty-headed, cold-hearted form of “ambition” and “inspiration.”

Clearly, Luxon himself is a lost cause. But do Nicola Willis, Chris Bishop and their friends within the National Party really want to propel a person with such repellent ideas into a position of power?

Footnote One: To date, observers have noted the obvious stylistic similarities between Luxon and John Key. The voice intonations, the ordinary bloke gestures and the general air of confidence are all very, very familiar. Strikingly though, Key never went out of his way to trash the poor in the way that Luxon did yesterday. Key was more inclined to celebrate his rise from humble origins in a state house alongside the railway tracks in Christchurch. Judging by his recent comments, Luxon would be more inclined to depict such people as losers already receiving an undue amount of care and attention.

Tactically speaking, National is supposed to leave the welfare bashing to its colleagues in the ACT Party. National is meant to be taking a more centrist tack, while David Seymour – an opportunist who makes Winston Peters look like Abraham Lincoln – panders to the aggrieved voters situated out at the centre-right extremes. Yet for now at least, Luxon seems to be going head to head with Seymour as the champion of the populist policies of grievance. As if any care or assistance offered to those on the bottom is happening at your expense. To repeat: so much for being a leader interested in uniting us all.

Footnote Two: This column doesn’t usually feature much in the way of personal anecdotes. Yet this Facebook anecdote by the Wellington journalist Jeremy Rose is so consistent with Luxon’s comments yesterday that it reads as confirmation:

“I met a former Air NZ flight attendant recently. She told me how their conditions were cut to the point that she had to pay for her own tickets to Auckland to work on international flights. On a return trip to Wellington she was told she’d be sitting next to Luxon. She asked not to be, but they said it was the only seat.

So, she told, me she had to decide whether to tell him how she felt or live with the fact that she hadn’t. So, she started to explain the situation and he interrupted her with: “You’re just waiters and waitresses…”. She said to me not only was that not true – there’s a lot of safety training, first aid etc, etc – but it was insulting to wait staff. She then pointed out to Luxon that the top 10 staff were earning $19 million between them to which he replied: “I could earn a lot more elsewhere.” He seems to lack any self-awareness, humility, decency or even intelligence.”

Footnote Three: The intelligence deficit not only marks Luxon as a less impressive figure than Jacinda Ardern. Luxon’s inability to retain a broad range of information is also something of a contrast to his mentor, John Key. For example: When Luxon recently proposed to amend the tax brackets, he did so without National having calculated how much this plan would actually cost. Imagine if the Greens or Labour had put out a tax plan lacking in that essential detail! We would be never hearing the end of it.

In fact, as the Herald quickly pointed out, the top tax bracket kicks in at $180,000, not $79,000. IRD’s most recent estimates suggest that only the top 3 percent of income taxpayers are paying that tax rate.

So… By scrapping the top tax rate, Luxon would be rushing to the aid of the elite 3%, and not coming to the assistance of a broad swathe of earners being pushed by inflation into the top tax bracket. An error on this scale is no way to run an airline, let alone an entire country.

Not that a Luxon being pumped full of slogans by his minders is able to keep that kind of stuff in his head. Having a command of the relevant detail doesn’t seem to be his “ambition” or “inspiration.”

Footnote Four: Finally, it isn‘t very Christian to write off the poor. As this column has noted before, Luxon’s Pentecostal beliefs appear to have a lot in common with the US “prosperity gospel” tele-evangelists, such as Joel Osteen. Wealth is taken to be God’s blessing on the righteous, while poverty is a sinful state that’s largely of one’s own choosing. It’s a very popular attitude within the US Republican Party.

The Bible though, would suggest otherwise. Think Proverbs 28.3 ( “The ruler who oppresses the poor is like the driving rain that leaves no crops.” ) Or Psalms 82: 3-4 (“Defend the weak and the fatherless; uphold the cause of the poor and the oppressed. Rescue the weak and the needy; deliver them from the hand of the wicked.”

Or what about Deuteronomy 10:18 (“He defends the cause of the fatherless and the widow, and loves the foreigner residing among you, giving them food and clothing.”) Or then again, in Deuteronomy 15: 7 (“If there be among you a poor man of one of thy brethren within any of thy gates in thy land which the Lord thy God giveth thee, thou shalt not harden thine heart, nor shut thine hand from thy poor brother..” ete etc etc And that’s even before you get to the New Testament.

In other words, Luxon’s views on poverty and wealth have very little to do with the teachings of mainstream Christianity. In fact, they’re flatly contradicted by them. IMO, it would be a sin to vote such a person into high office – but it’s a free call.