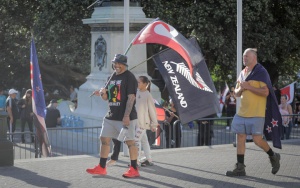 Gosh, as one academic advocated on RNZ this morning, why don’t some politicians just go out and meet the protesters, listen to them, and suggest a date for ending vaccine mandates. Like say, June 6, he proposed. Why, if that happened, he was pretty sure that everyone would readily pack up their tents and go home happy. Sigh. It must be nice to live in such a cloistered world that you can think that problems will evaporate once reasonable people have had a reasonable chat, thereby arriving at a compromise that suits everyone. In this movie, reason will dispel anger, every time. (Starring Tom Hanks as Dr Bryce Edwards!)

In reality and once you get out beyond the homeopathy tent, the various demands and threats emanating from the protest encampment over the past seven days have looked a wee bit less than amenable to rational discourse. Besides the violent threats to politicians and journalists and the disregard/contempt for the rights of anyone else in Wellington or beyond, the demands have just not seemed all that open to debate or amendment. They have included the execution of deputy PM Grant Robertson, the arrest of Health Minister Andrew Little, the resignation of Jacinda Ardern and the immediate end to all vaccine mandates, not in four months time. The idea that politicians would be met with anything other than abuse – and accusations that they had provoked the protesters – seems fanciful.

I’m aware that not all the protesters endorse that list of threats and demands. Yet the extreme threats have not been condemned by those at the encampment, either. These seem to be very broad tents. Well, if you choose to pitch camp with extremists, don’t be surprised if people judge you accordingly. At the same time… Sure, many of the people in the encampment can be seen to be the victims of Covid mis-information. Apparently, this has led them into making self-destructive choices whose outcomes they now seem happy to blame on anyone but themselves. While these people can be pitied, their presence at Parliament is simultaneously serving as a focus and platform for the dissemination of further dis-information, and for some truly vile polemics to boot.

Meaning: The longer the occupation lasts, the bigger the online audience for Counterspin and other reactionary outlets. In that sense, the encampment poses not only a risk of being a super-spreader event for the Omicron virus. It is also functioning as a super-spreader event that is amplifying the lies and mis-information rife on some social media outlets. In both the physical world and online, there’s an argument for de-platforming the protest at Parliament ASAP.

So far, all of the protests around the world on which this one has been modelled have ultimately had to be ended by some form of Police action. The Canberra Convoy encampment or instance, was finally broken up last week. Reportedly, the Police in Canberra provided prior warnings and then moved in slowly amidst repeated loudhailer advice that resisters would be arrested. If we do reach that point in Wellington, rational engagement may have minimised the scale of the conflict at the margins, but a sizeable core will remain who will, no doubt, embrace martyrdom-by Police. It would also be overly optimistic to think that the encampment will shrink significantly over a period of time. More likely it will reduce mid-week, and expand again on weekends.

There are sound public health reasons for vaccine mandates, and the polls indicate that an overwhelming majority of the New Zealand public support the need for the mandates. To promise to jettison the mandates just as the Omicron wave is breaking over the community would be an irrational concession, and made with little likelihood of the public receiving any tangible benefit in return.

There may be a point sometime in the future when vaccine mandates will become unnecessary because the virus is everywhere, but (a) no-one yet knows if and when that will happen and (b) in the meantime, vaccine mandates are still a useful way of slowing down the virus, protecting the public health system, preventing serious illness and saving lives. Those goals, and the rights to health and wellbeing that go with them, override the rights of those who – without valid medical cause – refuse to comply with the mandates.

Footnote: According to the likes of Josie Pagani,these are working class protests disdained by elitists who just don’t care that these honest folk have lost their jobs because of vaccine mandates, and who just don’t understand their anger. To which one can say two things: one there is ample evidence from say, the Gardasil vaccine drive to prevent cervical cancer that a high proportion of the anti-vaxx opposition to that campaign came from among affluent New Agey elitists, and not from among Maori/Pasifika and or low income families and schools. The same elitist strain characterises many of the loudest anti-vaxxers during this pandemic. Secondly, the one-eyed focus by Pagani on the working class people who may have lost their jobs by choosing not to get vaccinated, completely ignores the working class people in low income service jobs who are being protected by vaccine mandates.

As we’ve been told so often in recent days, there are a whole variety of different causes represented in the encampment on the parliamentary lawn. Anti-vaxx, anti-mandates, anti 1080 drops, anti-government, anti-Jacinda Ardern… So, here’s an old song for everyone out there. Groucho Marx, from almost a hundred years ago, shared your concerns: