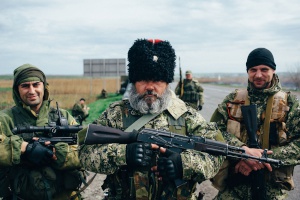 Russia’s tactics in Ukraine are not new. In August 2008, Russia fought a brief war with Georgia after the breakaway region of South Ossetia declared itself independent and invited in Russian troops. To this day, only Russia, Venezuela, Syria and Nauru recognise South Ossetia as being an independent nation. The rest of the international community regards South Ossetia as being under Russian occupation, and it continues to rely heavily on military, political and financial aid from Russia.

Flash forward to Ukraine this week, and it looks like the same formula. On Monday, Russian president Vladimir Putin solemnly recognised the independence of the breakaway regions of Donetsk and Luhansk in eastern Ukraine. Putin also affirmed his readiness to respond to any request these “countries” made for Russian help in crushing any resistance across those entire regions, and not simply in the small bits the rebels currently control. The Kremlin pretense is that all of this involves an invitation from a neighbour in need, and not an invasion.

The international community is not short on hypocrisy, either. The West has professed itself aghast and has promised “ harsh” sanctions although – as Werewolf has previously pointed out – these will involve nothing like the severity of the sanctions imposed on Iran. ( If the sanctions on Iran are a ten, one expert has said, the sanctions proposed against Russia are a three.) Russia is too big, and the potential for blowback on the global economy is too real, for the sanctions to be meaningful enough to change the new reality. (Example: will Russia be excluded from the SWIFT banking system that governs international commerce? Almost certainly not.)

If Ukraine takes military action to reclaim its territory the outcome is a foregone conclusion. In 2015, Kiev fought the rebels and lost. Attacking rebel forces openly backed by Russia would be a kamikaze exercise for the government in Kiev. And the US has already said that it won’t be putting its own forces in harm’s way in any conflict involving Ukraine.

The pantomime of outrage – and the largely symbolic sanctions this will entail – has other parallels. As the US academic Juan Cole says, there are striking similarities between the excuses offered by Putin for occupying eastern Ukraine, and the justifications Israel routinely uses to justify its occupation of Palestine. If New Zealand is willing to denounce Putin for his militant expansionism, it really should be denouncing Israel for doing much the same.

In both contexts, the imperial rationale has been almost identical. First, you assert that the oppressed never really had a genuine history or separate identity, anyway. Allegedly, Palestine never existed, and therefore can have no valid claim to autonomy. According to the Kremlin, the same goes for Ukraine. It comprises land“ stolen” from Russia, and is an integral part of Russia’s national security. As Putin claimed in his speech on Monday:

“If Ukraine was to join NATO it would serve as a direct threat to the security of Russia.

Since this is hardly a convincing argument for gunboat diplomacy in the 21st century, Russia and its apologists are more than willing to invoke the bloody suffering Russia endured in WW2, as if Russia’s need for “security” provides absolution for its past, current and future crimes against Ukraine, including the crushing of any aspirations for independence that Ukrainians themselves may have.

But there’s more. In the fevered dreams of Russian nationalists, Russia and Ukraine are one people, in that Russia, Belarus and Ukraine can all trace a common cultural ancestry back to the ancient “Kievan Rus” federation of principalities – centred in Kiev – that held sway in the region more than a thousand years ago, between roughly 900 -1250- A.D. Again this is somewhat similar to the ancient dreams of Eretz Yisrael, routinely invoked by Zionists to justify Israel’s expansionism on the West Bank. Moreover, As Putin claimed in Monday’s speech, “Ukraine never had a tradition of genuine statehood.”

In similar vein, a rampantly nationalistic essay that Putin wrote and published in July, 2021 is a masterpiece of historical revisionism:

Modern Ukraine is entirely the product of the Soviet era. We know and remember well that it was shaped – for a significant part – on the lands of historical Russia.. We can disagree about minor details, background and logics behind certain decisions. One fact is crystal clear: Russia was robbed, indeed.

In the time-honoured tradition of aggressors portraying themselves as victims. Putin went on in these lurid terms:

Russians in Ukraine are being forced not only to deny their roots..[in] generations of their ancestors, but also to believe that Russia is their enemy. It would not be an exaggeration to say that the path of forced assimilation, the formation of an ethnically pure Ukrainian state, aggressive towards Russia, is comparable in its consequences to the use of weapons of mass destruction against us. As a result of such a harsh and artificial division of Russians and Ukrainians, the Russian people in all may decrease by hundreds of thousands or even millions. Our spiritual unity has also been attacked….

Got that? Wanting to be independent – and free of domination – is akin in its consequences to the use of weapons of mass destruction. Wowzah. In reality, and once you get beyond the Donbas region that contains Donetsk and Luhansk, Ukraine has long been seeking to enhance its ties to Europe, ever since it got rid of a Russian puppet regime during the Maidan revolution of 2014. That uprising was not at the sneaky behest of the Americans, either. It was entirely consistent with a history of Polish/Lithuanian rule and influence on Ukraine, and equally consistent with the modern reality that Ukraine is bordered by several European countries – Poland, Slovakia, Hungary, Romania, and Moldova, as well as by Russia, and Belarus. Kiev has sought a balanced relationship with Russia and with Europe, not a future dictated for it by Russia.

Yes, Putin is right to say that the Kiev government has had enduring problems with corruption and with some of the neo-Nazi groups in its midst. But the amply reported “ thug culture” rife in the areas of Donetsk and Luhansk that are currently under rebel control has not exactly provided a model for a modern social democracy, either.

Oh, and if Putin wants to glorify the allegedly shared cultural history, there is the little matter of the Soviet collectivisation of agriculture during the 1930s, an experiment that created a famine that killed an estimated five to six million Ukrainians. This famine known as the Holodomor – was declared by Ukraine in 2010 to have been an act of genocide against the country and its people. Not for nothing Juan Cole has accused Putin of committing a “crime against history” with his rosily oppressive vision of Ukrainian and Russian “ unity.”

Footnote One: On the tankies question… It is depressing when leftists assume that there can be no such thing as a valid indigenous popular revolt against imperialist rule, if Russia happens to be the imperial power in question. In fact, the Maidan revolution that began in Kiev in 2014 enjoyed a ton of grassroots support, and scores of the unarmed people who joined it were shot down by the government, until Russia’s puppet Viktor Yanukovych fled to Moscow. The galvanising issue there was popular outrage at Yanukovych‘s refusal – on Moscow’s orders – to sign a closer agreement with the European Union.

No doubt all of this was welcomed by the US, who probably did funnel help to some elements of the uprising. (The current unrest against the tyranny in Kazakhstan is probably being welcomed by the US, too.) But there’s a difference between aid, and instigation. Cuba for instance, like Ukraine, wanted independence from imperial rule and from cultural colonisation by its giant neighbour. Yet just like Ukraine is now being treated by Russia, Cuba was once held to be an inherent piece of the furniture in the US backyard, and so essential to US security that an invasion (Bay of Pigs, 1961) could be rationalised.

Footnote Two: Trying to depict every indigenous challenge to Russian imperialism as necessarily being a CIA plot is pretty repulsive. Essentially, it is the flip-side of those conservative American assumptions in the 1960s that Vietnam’s war for independence couldn’t possibly be genuine, since it was being aided and abetted by Russia and China. I would argue that Ukraine isn’t a domino, any more than Vietnam was. And to repeat : Russia’s immense suffering during WW2 can’t justify its current aggression against Ukraine, any more than the immense Jewish suffering before and during WW2 can be deployed to justify Israel’s current actions in occupied Palestine.

Footnote Three: Ukraine is the second largest country by area in Europe after Russia. It has a population of 41.5 million, which makes it the 8th most populous country in Europe. The heavily industrialised Donbas region includes Donetsk and Luhansk. Within them, the rebel-held territories had comprised only about a third of the region. Most of the Russian-speaking population of the Donbas live within the main urban centres. Meaning: the Russian invasion will dramatically expand the extent of separatist rule.

Footnote Four: The very deep coal mines in the Donbas – these were established in the 19th century – are among the most dangerous in the world. Reportedly, a combination of methane gas and coal dust explosions, rock falls and badly maintained infrastructure take a regular toll in lives and serious injuries, as well as in environmental harm. At one Donetsk site in 1979 the Soviets carried out an experiment in “nuclear mining” by detonating a small nuclear device underground to disperse methane gas deposits, but without ever telling the miners about the hazards of radiation.

Footnote Five: The separatists in Donetsk and Luhansk have always complained about their geographical and cultural distance from Kiev, and tend to invoke their ancient mystical ties to the greater Russia of the Tsars. Yet amusingly as this article explains, Luhansk was founded by a Scotsman called Charles Gascoigne, and Donetsk by a Welshman called John Hughes. Until 1961, the town of Donetsk was named Yuzovska, after Hughes. Both men were acting at the time under contracts from the Tsars.

Footnote Six: Putin’s actions this week effectively scrap the so-called Minsk 2 agreement of 2015, which would have (among other concessions) granted greater autonomy to Donetsk and Luhansk. While they have been stalemated for the past seven years, the Minsk 2 accords were widely seen to be the peaceful, diplomatic alternative to military action. As recently as last week, Putin was still affirming his commitment to the Minsk 2 process.