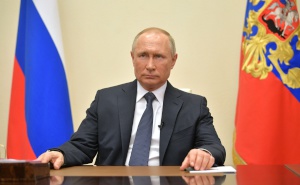 A great darkness is falling over Ukraine, and it will last for decades. In launching a full scale invasion, Russian president Vladimir Putin is doing what bullies routinely do. He’s beating up on a smaller, weaker adversary while claiming he was provoked. He was pushed into it, he says, and is acting only to defend his own “security.” Yeah right. The reality is that Russia is so weak it could not countenance even a flawed social democracy on its border. So the people of Ukraine are being crushed militarily, and Ukraine is to be ruled once again – as it was before the 2014 uprising – by a puppet whose strings will be pulled by Moscow.

Tragically, Ukraine is being turned by Russian military might into a vassal state like neighbouring Belarus, where a tyrant and his secret police – backed by Moscow – have reigned supreme for decades with all human rights extinguished, and with all the tyrant’s opponents being either murdered, imprisoned, or driven abroad. Critics of the Western response are already talking of Munich 1938 and likening US President Joe Biden to British PM Neville Chamberlain and his faith in empty promises of peace in our time.

Of late though, history has begun to look more kindly on Chamberlain, and on his efforts to avert a global catastrophe that ended up killing 26 million people. Do Biden’s armchair critics really want World War III, as proof of their virility? The US Republican Party’s criticism of Biden as “ weak” rings a bit hollow, given that their champion and leader – Donald Trump – has been grovelling at Putin’s feet in the past 48 hours, and calling him a “genius” for attacking Ukraine.

Unless I’ve missed something though, Biden has not yet invoked the supreme weapon in his sanctions arsenal. This would involve locking Russia out of the SWIFT banking system. This is a powerful option for Biden, since almost all of global trade is conducted in US dollars. Iran, with far less justification, has been excluded from SWIFT and this has ruined its economy. So why is Russia not being excluded, right now, from SWIFT? Well, what happened to Iran subsequently may be instructive. Shut out from global commerce, Iran was pushed into the arms of China which – despite the sanctions – is buying most of Iran’s oil regardless. In return, Iran has become China’s new platform of influence in the Middle East. Is the US afraid that if Biden did exclude Russia from SWIFT and did isolate it from the normal channels of trade, he would only further enhance the growing friendship between Moscow and Beijing?

That’s Biden’s dilemma. He needs to make a significant response over Ukraine. Yet a military response would be uncontrollable and would bring China into the conflict if Russia looked like losing. Yet if Biden punishes Russia too drastically with sanctions, the ultimate beneficiary would be China, who would welcome being made into the benign patron of a weakened and dependent Russia. Ukraine is now lost. The further nightmare is that China will be looking at the Western response to Ukraine, and will be thinking again about invading Taiwan. If China did so, what on earth could the US do about it? Wring its hands and impose more sanctions? None of the options currently available to the West look palatable, or seem likely to succeed.

Poor old ” Freedom.” It used to be an inspiring word. Of late, it’s become a catch cry of surly resentment for people who resent any of the rules designed to promote the common good – whether they be public health measures, environmental standards, gun control regulations etc etc. According to the freedom lovers, the vaccine mandates were devised solely to make their own lives more difficult. Newsflash: the vaccine mandates apply to everyone, and a large majority of the public support them. Like the road code and the Crimes Act provisions, the mandates have bad consequences only for people who choose not to abide by them. Their choice, and their consequences. Freedom!

But no, the Freedom Convoy parked on the Parliamentary lawn has been demanding that everyone else has to live less safely, in order to satisfy their preferences. The protesters want the mandates scrapped. Ironically, some of these people are only alive and breathing today because of the government’s pro-active public health response to the pandemic. Covid is not the only issue, though. The Freedom Convoy contains quite a few fellow travellers who don’t like this government, or any government, telling them what to do. Judging by their social media posts, they especially don’t like being told what to do by a government led by a relatively young woman.

That strain of misogyny is evident in other groups besides he wilfully unvaccinated. As the Aussie journalist Bernard Keane recently said, the same calls for “ Freedom!” are coming from a group of people who (by all external signs) appear to be relatively privileged, reasonably affluent, white and male.

Somehow, these people have convinced themselves (and some of their peers) that they’re the victims of a progressive agenda hellbent on their displacement. This upheaval in the natural order of things is said to be occurring to the advantage of “minorities” who – as Keane says – actually comprise the majority of the population, in that they consist of women, people of colour, LGBTIQ people, and people with disabilities.

There’s a political dimension to all this, of course. In any society, there are structural reasons for the social imbalances in wealth and opportunity. Yet in New Zealand, those structures have not been created by a cabal of feminists and left-wing academics who have somehow bent society to their will. Far from it. The actual power held by the few women in high office and by the relatively few lefty academics is actually vanishingly small, but they do serve as very handy scapegoats. As a consequence, a lot of nervous energy is currently being wasted over the alleged threats to freedom posed by New Zealand’s hate speech draft legislation and by the revision of our history curriculum. Not to mention the existential perils of teaching our kids about the legacies of colonisation, and the night terrors being experienced by some blokes over the feminist crusade that they imagine is being waged against men and all their works.

It used to be the centre-left that railed against Big Government. Now the centre-right seems to be the natural home for a conspiracy-minded bloc of white blokes. Far from being silenced and rendered afraid to speak out, an unsurprising number of them seem to have ready access to sympathetic media platforms to complain about their lot. Supposedly, these aggrieved chaps are being victimised by a conspiracy between Jacinda Ardern, political correctness and radical feminism. Finding a path to freedom from such a deluded worldview will be no easy matter.

Footnote: Many of us may have a few religiously inclined friends and relatives who sympathise with the Freedom Convoy and feel that its handful of good intentions and actions are being overlooked amid the reporting on its plethora of bad intentions and actions. Therefore, I thought a few Bible quotes might come in handy if and when family arguments arise, and anyone tries to get all spiritual in your face. Don’t let them take the moral high ground without a fight. Judging by these passages from the Good Book, the Freedom Convoy may not actually have God on its side. Here goes:

Proverbs 22:24-25: “Make no friendship with a man given to anger, nor go with a wrathful man, lest you learn his ways and entangle yourself in a snare.”

Proverbs 13.20:”Whoever walks with the wise becomes wise, but the companion of fools will suffer harm.”

And finally, that old marriage ceremony favourite, 1 Corinthians 13:4-6 : “Love is patient and kind; love does not envy or boast; it is not arrogant or rude. It does not insist on its own way; it is not irritable or resentful; it does not rejoice at wrongdoing, but rejoices with the truth.”

Don’t know if those passages are in the Bible that Pastor Brian Tamaki uses, though.