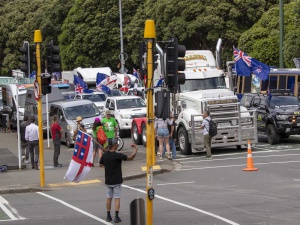 Canada is better known for being the home of relentlessly nice people. Yet its trucking protests have become an unlikely model for social disruption, as Covid-related protest movements around the globe have chosen to follow its lead and embrace social disruption as an end in itself. (In Canada, Prime Minister Justin Trudeau and his family had to be moved from their home to ensure their safety.) True to the Canadian model, this week’s protests at the New Zealand Parliament began with traffic disruption before moving onto the Parliamentary grounds, where the usual rules about not erecting tents and staying overnight were brushed aside. The full end game is yet to play out. In the end, the wet and windy weekend weather may prove as big a deterrent as any Police action.

All the same, the handling of the protests at Parliament have shone a spotlight on when the Police will resort to force as an early option, and when they won’t. Evidently, there isn’t a one size fits all approach. In previous protests – like the ones say, against arms sales conventions, or the climate change protests that targeted business-as-usual at the Stock Exchange – protesters have been relatively few in numbers and attracted limited media interest. Those kinds of protests tend to be met head on by the authorities, and are often dispersed with a considerable use of force. In contrast, the Police have been willing to allow the squatters at Parliament to do their stuff, at least until the serious disruption to ordinary Wellingtonians has belatedly begun to force the issue.

How the times have a-changed. In decades past, Vietnam war and Springbok tour protesters could expect to encounter heavy Police interventions (with batons) a lot earlier in the piece. Yet today’s protest organisers tend to be media savvy. They can see the publicity value of martyrdom-by-Police. Having their followers arrested on camera and dragged away from the scene can generate useful footage on social media. Yesterday however, the footage of some of the hitherto prominent convoy figures streaking for the gates once the Police began to move in, will have done nothing for the recruitment drive. Nor will the convoy’s reckless frontline exposure of children and pets to potential harm.

Why the contrast in the Police response? The immediate aims of the protest and presence of the media both seem to make a difference. If the protests against arms conventions, or social inequality or climate change are intent on disrupting particular sites of business or operations of the state, they can expect to be met with force. (Again, especially if the media isn’t on hand to record events for wider consumption.)

The more diffuse the protest – and this week’s protests could hardly have been more ill-focussed – they amount to little more than nuisance value, and it will be more likely they will be allowed to simply peter out. After all, the people most affected by this week’s protests were just ordinary Wellingtonians, and not some essential business or organ of the state. Initially at least, the citizenry were deemed to be expendable. Amply protected, Parliament could even continue to conduct its affairs, with the protesters singing and shouting impotently outside.

The Police response to this protest – and to the Groundswell protests before it – have underlined just what a sideshow irrelevance these protests are seen to be by the authorities. Vaccination rates are sky high, the polls are rewarding the government for its handling of the pandemic, and the Omicron wave is about to crash into the ranks of the unvaccinated. The anti-vaxxers and libertarians in the convoy comprise a pitiful minority, whose antics affect no-one but a few ordinary people trying to find a parking place on their way to work.

In very similar fashion, the Groundswell protests do not speak for the future of agriculture. Progressive young farmers around the country acknowledge the record returns that farming is currently earning, and for years they have been responding positively to what needs to be done to minimise climate change and improve water quality. Groundswell can therefore be safely allowed its disruptive day in the sun by the authorities, as it futilely drives its tractors and utes back into the past.

For the Police, the exercise of discretion has involved some finely-tuned decisions. Yesterday, the most provocative protesters began to be picked off one by one by a flying wedge of Police, and carted away. The protesters themselves seemed to have no tactical sense about how to stretch Police resources by spreading out their numbers into small groups, and confronting Police lines all across the precinct. Instead, they obligingly congregated together and all but offered themselves up en masse for arrest.

Initially, the Police response to the wider protest had seemed to be to wait it out, and allow time, discomfort and the weather to thin out the participants. Moreover, once the annoyance factor of the protests had been given time to build up – double-parked vans on bus stops etc – this gave the Police an even stronger public mandate to crack down. The hard core protesters, who seemed hellbent on getting arrested for their various causes, could then be granted their wish. As mentioned, some formerly prominent protesters lacked that same commitment, and scarpered.

Historically, the Police journey to greater sophistication in its handling of protests probably began with Bastion Point, which was an own goal for the Police of epic proportions. Ihumatao, which was Bastion Point’s closest modern counterpart, was handled very differently. The ongoing Erebus memorial protests in Auckland have been another telling display of discretion by the authorities.

This planned memorial in an Auckland park enjoys wide support nationally, as a belated commemoration of New Zealand’s worst aviation disaster. The relevant local iwi was consulted, and gave the project its blessing. Yet a small encampment of protesters invoking some dubious environmental and Treaty rationales have managed to delay the building work for nine months or more. In the Erebus case, no one seems to be eager to rush into dragging off a mixed group of Maori protesters and Parnell socialites lying down in front of the bulldozers. The families of Erebus victims, who have waited so long for a tangible public symbol of their loss, have been given no option but to show even more patience.

By their nature, public protests involve some level of social disruption. What this week’s efforts show however is that it is impossible to predict when the Police will use force to prevent ongoing disruption. How much disruption – and what sort of disruption and to whom? – seem to be the relevant factors. Perhaps the unpredictability of the Police response to public protests has itself become a policing tactic.

Yesterday’s piece in Werewolf about the Ukraine crisis failed to mention the Minsk II agreement, which may well be Vladimir Putin’s real goal in this confrontation. Arguably, he may not need to invade, if his external military pressure can get the Minsk II accords put into effect. These accords were hammered out in 2015 between Kyev, Russia, the separatist rebels ( who had twice heavily defeated the government forces in pitched battles) and several nearby European states.

France and Germany moved quickly to help broker [another] peace agreement, and on Feb. 12, 2015, representatives of Ukraine, Russia and the rebels signed a deal that envisaged a new cease-fire, a pullback of heavy weapons from the line of contact between the troops and the rebels, and provisions for a political settlement. A declaration in support of the deal was signed by the leaders of Russia, Ukraine, France and Germany.

However, some of the key provisions of this deal have never been fully implemented – mainly because they amount to a humiliating blow to the country’s unity by recognising the de facto secession of the Donbas region of eastern Ukraine.

The deal, dubbed Minsk II, included an OSCE-monitored cease-fire, a pullback of heavy weapons and foreign fighters from the line of contact and an exchange of prisoners. In a major diplomatic coup for Russia, the document obliged Ukraine to grant special status to the separatist regions, allowing them to create their own police force and have a say in appointing local prosecutors and judges. It also required Kyiv to offer a sweeping amnesty for the separatists and negotiate details of holding local elections with rebel leaders.

[Minsk II] stipulated that Ukraine could only regain control over the border with Russia in rebel regions after they get self-rule and hold OSCE-monitored local elections — balloting that would almost certainly keep pro-Moscow rebels in power there.

What Putin may currently be pressing for ( before he will agree to go home) is the full implementation of the terms agreed in the Minsk II agreement seven years ago. From Russia’s POV, that would seem entirely reasonable.