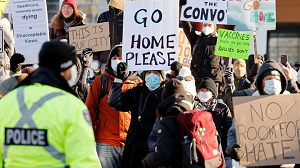 First contain, then clear. This morning’s belated “traffic management operation” by the Police is clearly a containment exercise meant to create boundaries beyond which the protest will not be allowed to expand. Once established, that perimeter can (at some future date) begin to be tightened inwards. Clearly, this strategy carries risks of confrontation – but standing back and allowing further expansion into other streets and locations wasn’t an option, either. As yet though, the Police are not carrying out the kind of wholesale clearance of the protest that has been occurring in recent days in Ottawa, Canada.

Since Ottawa has been the acknowledged model for our protests, it wouldn’t be surprising if the Canadians were serving as the model for our policing response as well. The legal backdrop has been interesting. Three weeks after the Ottawa truckers protest began, it seems that the Police have finally advanced only after the protest organisers were faced with an injunction initiated not by the city authorities, but by a young Ottawa resident. This impelled the Police to uphold the law. In addition, federal emergency powers had been invoked that, among other things, made it an offence to bring a child to the protest site.

This is worth stressing. Basically, the legal machinery that has culminated in the belated Police action in Ottawa has been set in motion by the residents adjacent to the protest. They have been subjected to weeks of threats, to noise and sleep disruption, to a heightened risk of Covid infection etc etc. Much of this ordeal has been minimised or simply ignored by the Police, the city authorities, and by central government – all of whom seemed to be paralysed by the kind of difficult decisions that they are employed to make. After all, it comes with the pay grade.

Ultimately, it fell to one such resident – Zexi Li – to launch a class action lawsuit that produced the injunction taken out against the protest organisers. In this clip, Li explains her motivations, much of which will sound very, very familiar to the Wellingtonians whose lives have been disrupted over the past fortnight. That disruption has largely been minimised, and/or ignored.

Overall here, there seem to have been more apologists for the protesters than defenders of the local residents.

Finally on the Ottawa Police action… So far, this seems to have occurred with only sporadic outbreaks of violence, although the limits on reporting make that hard to verify. The Ottawa Police have also made it very clear that the commercial operator licences of some of the truckers involved will be suspended, and where possible, legal action will be taken against those who took part in what has always been an illegal occupation of the city streets. Here’s the latest CBC update:

So far on Saturday, police in the nation’s capital say they’ve arrested 47 people, bringing the total to 170, and have towed 53 vehicles since Friday. They also said they’ve seized 22 licence plates and suspended 11 commercial vehicle operator registrations…

While some demonstrators have left the area of their own accord, interim police Chief Steve Bell said police will pursue charges. “If you are involved in this protest, we will actively look to identify you and follow up with financial sanctions and criminal charges This investigation will go on for months to come … we will hold people accountable for taking our streets over.”

It remains to be seen whether the New Zealand Police – and the Wellington city authorities- will eventually want to go down this same road of pursuing subsequent legal action against the protest organisers, let alone against the participants. The licence plates on the cars, vans and trucks clogging the city streets would make this a fairly simple exercise, if the intention existed. It seems far more likely that the threats and other actions against residents, and the occupation of Parliament and the adjacent city streets will have no legal repercussions.

Central government has been OK, throughout. Parliament has been enabled to go about its normal business, safe and sound behind Police lines. Yet just like the nearby residents, local businesses have been treated as expendable, while the authorities have wrung their hands, pondered their options and sought to find ways to minimise the potential political fallout to them. At the very least, Wellington Central MP, deputy PM and Finance Minister Grant Robertson should be offering a sizable compensation package for those adjacent firms whose businesses have suffered measurable losses as a result of these protests.

At the very least, such a package would acknowledge that the Police, central and local government all failed local residents and firms weeks ago, by allowing the protests at Parliament to become as big as they have eventually become. A “traffic management operation” would have helped, long before this.

At an adjacent café table, I recently overheard the pastor of an evangelical church explaining – to another pastor – that his church had no intention of barring its doors to the unvaccinated. This was mainly because after checking his Bible, he couldn’t find a mandate for doing so. Sure, the Bible might at a stretch, allow him to refuse access to the already sick and infected, but he could find no Biblical basis for refusing ministry to the merely unvaccinated given that they were (not yet) sick. By doing so he would in effect, be excommunicating them. That wasn’t an option, in his Book.

His open door policy, he calculated, had currently cost him between 8 and 12 parishioners – some of whom had decamped to another church with a stricter Covid policy. A few had family members with pre-existing conditions, and he was hoping to work back around some of them. (This seemed to involve minimising the risk they faced, given God’s personal care and attention as mediated by him.) By his count, he had about 100 parishioners left. Fully 50% of them, he felt, should qualify for a medical exemption, but the damnable Ardern government was severely limiting access to that option.

Oh and besides… The way he figured it, there wasn’t really much call to embrace the vaccines, anyway. He’d heard that some 96% of the people getting infected and hospitalised were vaccinated, while only 4% were unvaccinated. Evidently, the pastor had a firmer grip on how to interpret the Bible than on how to pass judgement on official stats. The doubly vaccinated comprise circa 95% of the population. Given the known incidence of breakthrough infections, their numbers would (inevitably) dominate the unvaccinated minority. But this merely underlines the value of getting boosters, which significantly shore up the body’s defences against Omicron.

Also, recent research does not support the pastor’s judgement of the situation :

IMO, Jesus would be judging vaccines by their works. Meaning: He would be treating vaccines as miracles of creation, in that they protect God’s creatures from avoidable harm. I’m not on speaking terms with the Good Lord, but I can imagine him saying: ”Go forth and vaccinate, in my name.” Too bad that kind of message is not coming from more evangelical pulpits, nationwide.