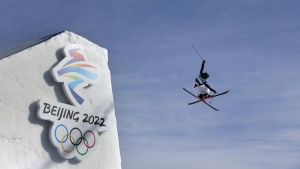 Before this year’s winter Olympics Games even began, Human Rights Watch had already condemned China’s intention to use its hosting role as an opportunity to “sportswash” the country’s abysmal human rights record. To that end, China had also warned the participating athletes themselves that if they engaged in any expression of dissent, they would be treated (and punished) as if they were political activists.

Yang Shu, the deputy director general of the international relations department of the Beijing Organizing Committee, said, “Any expression that is in line with the Olympic spirit, I’m sure will be protected. Any behaviour or speeches that are against the Olympic spirit, and especially against Chinese laws and regulations, [will] also [be] subjected to certain punishment.”

China itself, however, has milked the occasion for political symbolism, starting with its use of a Uighur athlete to light the Olympic flame. If any athlete taking part felt misgivings about being an unwitting extra in a propaganda exercise, that moment should have been a wake-up call. Besides the obvious chasm that exists between one Uighur carrying a torch in public, and millions of Uighurs being subjected to genocidal attacks on their freedoms and culture, the fate of any Uighur dissenter was being reflected in this chilling news item:

A Uyghur who served as a torchbearer in the 2008 Summer Olympics in Beijing and was a loyal Chinese government official is serving a 14-year jail sentence for watching counter-revolutionary videos, caught in a crackdown on the ethnic minority group, officials in Xinjiang’s capital Urumqi said.

The censorship involved has had global outreach.

We like to watch, though. But… Can it be morally justified to take part in – or even to tune in to watch– a spectacle that so blatantly serves the repressive ends of a totalitarian regime? The world has been down this road before. In response to the persecution of Jews and other minorities, there was a global movement to boycott the 1936 Summer Olympics in Berlin hosted by Nazi Germany. The notoriously conservative sporting bureaucrat Avery Brundage – at the time, he was the president of the American Olympic Committee – was a key reason why the boycott did not succeed.

As the Olympics controversy heated up in 1935, Brundage alleged the existence of a “Jewish-Communist conspiracy” to keep the United States out of the Games.

Thanks largely to Brundage’s efforts, the US narrowly decided to participate, and other countries eventually fell into line. The Games served the cause of Nazism extremely well:

For two weeks, Adolf Hitler camouflaged his antisemitic and expansionist agenda while hosting the Games. Hoping to impress the many foreign visitors who were in Germany for the Games, Hitler authorized a brief relaxation in anti-Jewish activities (including the removal of signs barring Jews from public places). The Games were a resounding propaganda success for the Nazis. They presented foreign spectators with the image of a peaceful and tolerant Germany.

Incidentally, some aspects of what we now think of as Olympic ritual originated in 1936 with the Nazi masterminds of how to put on a stirring public spectacle. The 1936 Games were for example, the first to feature the Olympic torch relay, which memorably involves a torch being carried from Olympia to a plinth situated on the site hosting the Games. We have the Nazis to thank for that symbolic moment. At Berlin for the first time, hundreds of athletes in opening day regalia also marched into the stadium, team by team in alphabetical order, with Adolf Hitler presiding over the opening ceremony.

Rugby made us pariahs

For ten years from the mid 1970-s to the mid 1980s, partial boycotts of the summer Olympics took place. Some 25 African nations boycotted the 1976 Olympics in Montreal in protest at New Zealand’s participation, given our rugby tour of South Africa. The 1976 tour’s first game was staged only two weeks after the apartheid regime began gunning down schoolchildren in Soweto. Famously, five of the touring All Blacks had been granted “honorary white status” by the regime for the duration of the tour. In the light of what had gone before, the 1981 tour protests should be seen as acts of atonement.

Moving right along… The US boycotted the 1980 Olympics in Moscow in protest at the Soviet invasion of Afghanistan. Four years later, a similar boycott occurred involving Soviet, East German and Cuban athletes at the 1984 Olympics held in Los Angeles. The official reason given by Moscow for that boycott was that the hyper-nationalism of the Reagan era made the venue unsafe for athletes from socialist countries.

One can argue about the validity of the 1980s boycotts. Point being though, those incidents were not outliers in their use of the athletes as props for political purposes. From 1936 onwards, the Olympic Games have always been a political spectacle as well as a sporting spectacle, and boycotts have been merely one of the forms that the politicisation of elite sport has taken. Awarding the Games, and hosting the Games have also been deeply political (and commercial) decisions.

The Hunger (for medals) Games

The common justification for the Olympic circus is the unifying purpose that the Games are alleged to serve. Young people from across the globe are meeting together in peaceful rivalry in the pursuit of sporting excellence etc etc. The counter reality is that the Olympics Games are not only fiercely nationalistic, but that the TV ratings vital to the Games’ survival depend on the fostering and feeding of those atavistic impulses. The medal tallies per country quantify the standings of national superiority and inferiority. Each country gets to brag about their medals and their heroes, while only grudgingly – if at all – acknowledging the feats of athletes from other countries.

In New Zealand for example, the Games coverage so far this year has been wall to wall Zoi Sadowski-Synnott. In Norway, a lot of the coverage has been about the photogenic skier Johannes Hoesflot Klaebo. In the US, the coverage has been dominated by Chinese-American figure skater Nathan Chen and the middle aged snowboarding exploits of Lindsey Jacobellis and Nick Baumgartner… In Australia it has largely been about the efforts of Jakara Anthony and Jaclyn Narracott. The fact that few New Zealanders will have even heard of those other athletes only goes to prove the point of just how fiercely nationalistic the Olympic Games tend to be, and intentionally so. Chauvinism is so very good for the TV ratings.

There’s another thing. At the summer Games, the exploits of Kenyan/Ethiopian distance runners tend to obscure the underlying reality of the Olympics: A nation’s wealth tends to be reflected in the medal tallies. The success of Norway at the Winter Games says as much. A very wealthy country of five million people leads the medal tables, ahead of China, the US, Germany, France etc – countries that are at least twelve times (and more) the size of Norway. And this is no new thing, either, as this excellent article in The Ringer explained on Monday :

Norway not only leads second-place Germany 33-24 in total medals, but it’s set a new national record for medals with time to spare. And it’s not like this is an aberration: In Sochi, the Norwegians tied for first in gold medals and were third in total medals, and they’ve been in the top six in total medals in every Winter Olympics dating back to 1992.

How come? Interestingly, Norway’s success is not simply due to GDP. Arguably, Norway beats rich ( and bigger) nations because of its strong commitment to egalitarianism:

Not only is Norway rich; income inequality isn’t as bad there as it is in other wealthy but more stratified societies like Qatar or even the United States, so a larger pool of people are beneficiaries of the national wealth. That includes national investments in sports and physical fitness.

This commitment to equality enables Norway to blur the lines between “elite” sport and the facilities available nation-wide to almost everyone. When anyone can participate, more of them do, and more of them excel:

“It’s Norwegian government policy that every farmer, every fisherman, no matter where he lives in the country, has the right to play sports,” Kuper and Szymanski wrote [ in their book Soccernomics.] “Norway will spend what it takes to achieve that. Just as supermarkets have sprouted all over Britain, there are all-weather sports grounds everywhere in Norway. Even in the unlikeliest corners of the country there’s generally one around the corner from your house. Usually the locker rooms are warm, and the coaches have acquired some sort of diploma. A kid can play and train on a proper team for well under $150 a year, really not much for Norwegians.”

It is a consistent theme. Overall, the Olympics tend to be rich countries’ Games, and they tap into the hyped up nationalist sentiments of viewers from relatively affluent countries. Despite the occasional exceptional athlete that proves the rule, the Games are very much a pageant of inequality, played out as a sporting spectacle.

Richer countries tend to produce better athletes for several reasons, ranging from government and corporate investment in sports, to the fact you need leisure time to get good at sports, to childhood nutrition (kids who eat better grow up to be bigger adults). Eight of their top 10 sporting nations were in the top 23 on the U.N.’s human development index, which measures life expectancy, wealth, and education, among other factors.

The circus goes on, partly because it offers the chance of a little something for everyone. Chances are, there will be morsels from the table for even small and relatively wealthy countries like New Zealand to rejoice in. Yet please, let’s not kid ourselves that the stellar exploits of say, a Zoi Sadowski-Synnott are earning us the admiration of anyone else, or are putting this country on the world map. Elsewhere, people are too fixated on their own heroes to notice. That’s the real spirit of the Olympic Games: hey, we got ours.