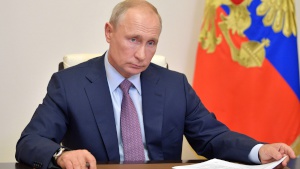 Is Russian leader Vladimir Putin going to invade Ukraine, or is he just bluffing (for now), much as China was a few months ago? A lot of people (including Australia’s Defence Minister) were pretty sure that China was about to invade Taiwan. Except it didn’t. (For now.) Despite all the sabre rattling and the invasion prep, only Putin knows what he is going to do tomorrow, next week, or some-time in the future about Ukraine.

For onlookers at a safe distance, some of the guesswork and counter-guesswork in recent weeks has been pretty amusing. Will, for instance, Russia mount a ‘false flag” attack against Russian-leaning communities inside eastern Ukraine in order to justify an invasion – or has the intel to that effect been planted by the Russians themselves, in order to wrongfoot Western intel agencies and make then think that a false flag operation is in the offing? You can tie yourself in knots just thinking about this stuff – as Newsweek did, only a couple of days ago:

“Is this whole [false flag] thing made up to begin with to confuse us about what the Russians intend to do by the Russians lying about some big event that’s coming in to signal that they want to invade?” a former US counter-intelligence officer [told Newsweek]…..”It could be that the Russians are undecided whether or not they want to invade, that in order to better protect their invasion plans…[They] want the U.S. to believe that they’re going to do this sort of thing first and then that way the U.S. is looking for it and then the Russians invade anyway, because that was all bullshit.”

So… It may be a deception within a deception, meant to blow smoke across invasion plans that may also be a deception, until they aren’t. Right. Gotcha. But if Putin truly is only bluffing, that creates a further problem. Because the more military firepower that Russia piles up on Ukraine’s borders, the harder it is going to be for Putin to eventually send all those troops back home to their bases right across Russia. If he wins no significant economic or diplomatic gains, Putin will risk looking like a ”small cat”, to use the term that Daniil Medvedev recently flung at an Australian Open tennis umpire. The West meanwhile, will declare victory. A threat to brave little Ukraine has been deterred by a resolute stand by the US and its allies!

US President Joe Biden has been here before, of course. He was the foreign policy wise old head within Barack Obama’s kitchen cabinet back when Putin invaded Crimea in 2014. Since then, Russia has armed and trained separatists in the Donbas region of eastern Ukraine in a bitter conflict that has claimed at least 14,000 lives, including all of those aboard the Malaysian airliner shot down by rebel forces armed and trained by Russia. Back in 2014, Biden had argued for a more robust response to Russia, one coordinated with America’s European allies. He was overruled.

This time, many of his more hawkish advisers from 2014 are now in powerful positions where things could get serious, quite quickly. Allegedly, Biden “ lost” Afghanistan. He can’t afford to “lose” Ukraine as well. Even if Biden too, is reasonably sure that Putin is only bluffing, the more threats of retaliation that Biden can loudly utter, the more any subsequent Putin” backdown” will enable Biden to recoup the ground he lost among Americans after he had the bad luck to be the commander-in-chief when the US finally “lost” Afghanistan.

Ahem. But what if Putin isn’t bluffing? Last July, Putin published a long article about Ukraine that was either (a) a hair-raising rationale for an invasion and/or (b) the same old revanchist claptrap that the mystics in the Kremlin have been spouting for centuries, to justify their domination of Ukraine and its people. Putin’s essay contained a fine array of the false justifications uttered by Russian imperialists down the ages (“Russians and Ukrainians are one people, a single whole… [they occupy] the same historical and spiritual space” etc etc). But Putin’s essay also contains some genuinely scary bits, as this US think tank noted last year:

In one particularly ominous passage, he openly questions the legitimacy of Ukraine’s borders and argues that much of modern-day Ukraine occupies historically Russian lands, before stating matter of factly, “Russia was robbed.” Elsewhere, he hints at a fresh annexation of Ukrainian territory, claiming, “I am becoming more and more convinced of this: Kyiv simply does not need Donbas.” [To repeat: the Donbas region is the secession-minded part of south-eastern Ukraine.] Putin ends his lengthy treatise by appearing to suggest that Ukrainian statehood itself ultimately depends on Moscow’s consent, declaring, “I am confident that true sovereignty of Ukraine is possible only in partnership with Russia.”

The bluffing – if it is bluffing – has not been restricted to the Russian side of this crisis. Despite the tough talk from the White House, Biden has promised that there will be no military involvement by US forces on the ground in the Ukraine. If a war is to be fought, it will be by Ukrainians armed and trained – like the Afghan forces before them – by US and European “advisers.” (We know how well that usually goes.) Biden has also promised harsh economic sanctions if Russia invades, but – unlike a small country like Iran – Russia is too deeply embedded in the global financial system for those sanctions to be serious and/or effective. The likely blowback from Russia would be intolerable for the US and Europe. ( Russia may cut off supplies to a Europe that’s still heavily dependent on Russian natural gas. And even the US still imports some Russian petroleum.)

More to the point, the full US arsenal of heavy economic sanctions will not be used. For example: Russia will not be shut out of the “SWIFT” international banking system, the crippling sanction that the Americans have recklessly used to destroy the living standards of ordinary Iranians. Russia will not be treated in the same way that Iran has been. It is too valuable to the West. It is almost certain, for instance, that trade with Russia denominated in US currency will continue, even if Russian troops enter Kiev.

The Arts of Painless Pain

In this respect, the whole Ukraine crisis has been a useful thought experiment about how effective (or ineffective) economic sanctions can be as a tool of deterrence. Back in 2014, the sanctions imposed by the Obama administration did do a bit of temporary damage to Russia’s GDP figures but they hardly brought the Kremlin to its knees, and nor were they ever expected to do so.

By and large, sanctions against major powers are just window dressing to make it look as if something is being done. (See China: Uighurs.) Moreover, because US sanctions once imposed can only be lifted by the US legislature – which is more deeply divided than ever along partisan lines – the country being targeted has absolutely no incentive to change its ways. US sanctions once imposed, tend to be forever. Even though, as the 60 year old sanctions against Cuba amply demonstrate, they long ago ceased to serve any rational purpose. It’s a problem:

The United States and Europe placed targeted sanctions on Russia, including on certain individuals close to the Kremlin, and within certain sectors, like financial and defense. But they did not take the most dramatic steps — like really going after Russia’s energy sector, or going after the biggest financial institutions — because of what it might unleash. Now the US and its partners are again staring down this question: How to punish Putin, without punishing themselves, at least too much.

Finally then… Even if the intention to drastically punish Russia existed – and it doesn’t – we live in a different world now. Cryptocurrencies – and China – provide options for any country unlucky enough to be frozen out of a global banking/trading system that is denominated in US greenbacks. For example: China buys oil from both Iran and Venezuela, regardless of sanctions. Sanctions have only made those countries subordinate to Beijing. And even though China seems lukewarm about Putin’s adventure in Ukraine, Beijing would hardly let Russia go to the wall. In fact, a Russia made more dependent on China thanks to US sanctions would be seen by China as a very welcome gift indeed.

So for now, we’re back at square one. Sanctions can’t – and won’t- deter Putin. Only Putin can, assuming that military and territorial gains were ever the only prizes he seeks. Meanwhile, he keeps gaslighting the West that the outward signs of an impending invasion mean nothing at all, folks. According to Putin, all this talk of invasion is merely a Western politico-media beat-up. But he would say that ,wouldn’t he – whether he is bluffing, or whether he isn’t.

Footnote: Despite Putin’s hyper-nationalist rhetoric, Ukraine has always felt its proximity to Russia to be a very mixed blessing. Ukraine, after all, is close to Europe as well. It shares borders with four EU states—Hungary, Poland, Slovakia, and Romania—and when in 2013 Russian puppet president Viktor Yanukovych refused (on Russia’s instructions) to sign a political and economic association agreement with Europe, this refusal triggered a popular uprising that swept him from power. Subsequently, Ukraine signed a trade pact with Europe and its citizens now enjoy Schengen visa access to Europe. It was this revolution – one waged over Ukraine’s strong desire for a more balanced relationship between Russia and Europe – that set in motion Putin’s long campaign of retaliation and de-stabilisation. Basically, Putin will not let himself be seen by history as the Russian President who “lost” Ukraine.

Animal Collective’s fluke moment in the popular mainstream happened in 2009, with the chart success of their Merriweather Post Pavilion album. Before and since, they’ve been happy to be one of the century’s most influential, beloved and polarising indie bands – an electronic campfire ruckus of beautiful clattering noise. For the past decade, they’ve backed away onto the margins again, and their new album – Time Skiffs – is the band’s first real album together in six years. By their standards, this is an elegiac collection. Tracks like “Prester John” and “Walker” sound like farewell notes to their fans.

Yet for those devoted fans, the same melodic experimentalism is still there, under the autumnal sheen. Everyone is a bit older now. For better and worse there is no sign of the heartfelt yearning and yowling that David Portner ( aka Avey Tare) brought to early classics of tumbling desire like “The Purple Bottle…” In 2022, that track seems like music from another planet.

From the new album, here’s “Walker” which is Animal Collective’s tribute to kindred spirit Scott Walker. As mentioned, it reads like a goodbye note to each and every one of us: