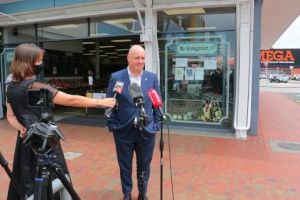 According to National’s leader Christopher Luxon and the fawning media coverage of the caucus gathering in Queenstown, its “game on!” Not a great metaphor, folks. Politics is only a game for people wealthy enough to afford to lose a round or two. For multi-millionaires who own seven houses, politics might be just a game. (Or a vanity project.) Yet for a lot of other people, political decisions determine whether they can feed their families or put a roof over their heads. Still, what can you expect from a political party that chooses to launch its re-commitment to ordinary New Zealanders in Queenstown, for goodness sake.

After months in the job, Luxon has yet to come forth with a single policy that isn’t a rehash of decades-old ideas. For example: Luxon’s advice this week to the faithful that the party needs to be seen to be a “caring” party is a revival of the “compassionate conservatism” that was popular within US conservative political circles over twenty years ago:

The [compassionate conservatism] philosophy supports the implementation of policies designed to help the disadvantaged and alleviate poverty through the free market, envisaging a triangular relationship between government, charities and faith-based organizations. The term entered more mainstream parlance between 2001–2009, during the administration of US President George W. Bush…The term has also been used in the United Kingdom by former Prime Minister David Cameron and in New Zealand by former Prime Minister John Key.

Yes, we are truly blessed to have the love child of David Cameron and John Key as our next prospective leader. Since we know God is on his advisory team, I’d keep an eye on Luxon making greater use of those “faith based organisations” for his welfare policy delivery. (It worked in the 19th century after all.) Otherwise if elected, a Luxon-led National government appears to be readying itself to deliver another same old package of tax cuts, public service cutbacks, punitive law and order policies and all the other budget-balancing, austerity measures that failed New Zealand previously.

It feels uneasily like we’re watching a hologram of a political leader, one pre-programmed to play only the Solid Gold National Party hits of yesteryear. Even Luxon’s commitment yesterday to raise the age of pension eligibility from 65 to 67 was an old idea exhumed from some mildewed policy crypt. It’s going to be hard though, to find all that fabled wasteful government spending that he’ll need to uncover if he’s going to fund what he also claims is work left undone in education and health. Maybe, as in days gone by, he needs to announce a Razor Gang. Because that worked so well the last time that National tried to take a razor to public health.

In the meantime, let’s get down to brass tacks and talk seriously as only rich men can do, about what needs to be done with the economy. Starting with… Who needs those minimum wage increases? That sort of thing only destroys incentive, right? RIGHT?

BTW, there is no evidence to support the contention that the National Party – any more than the Republican Party in the US or the Conservative Party in Britain or the conservative ruling coalition in Australia – is better at running the economy. Such parties do know how to govern for the benefit of shareholders. But maximising shareholder wealth isn’t – or shouldn’t be – the main business of government. (In fact. the ability to cut costs and staff and maximise shareholder returns is actually a terrible qualification for political office.) And besides, the overseas evidence simply does not support the faith-based belief that centre-right governments are better at managing the economy.

In short, the economy grows at a very similar pace under Labour and the Conservatives, but Labour governments seem to do better at tackling recessions and achieve a more consistent performance. And if we discount the global financial crisis of 2007-09, Labour’s (slight) superiority becomes more pronounced.

The US evidence is even more pronounced. The US economy has performed significantly better when Democrats are in power and only some of that success has been due to historical good luck.

Since the second world war, average annualised growth of US real GDP has been 4.33% for Democratic presidents and only 2.54% for Republican presidents. The difference is statistically significant and robust.

Also, there is no doubt that in Australia – and in New Zealand – the centre-left has not only economically competent, but more socially innovative:

Whitlam modernised the political economy of Australia, securing equal pay for women, decentralising government to the regions, recognising China. The Hawke-Keating government’s reforms did not just increase national wealth, but delivered Medicare and superannuation, long-term structural changes that made the nation wealthier and more equitable. And Rudd-Gillard used a moment of global financial crisis to invest behind energy efficiency and affordable housing….

In between (in Australia,) came the centre-right Fraser and Howard governments that largely just presided over (and trimmed) what their opponents had put in place. And the rare occasions they innovated, you wish they wouldn’t. For example: “Howard increased the tax base for working people with GST and then sprayed the proceeds into tax breaks for those who had already accumulated capital.” In short, centre-right governments tend to capitalise on the work done by their predecessors in office while preserving the worst aspects of the status quo.

The reason why these overseas examples are relevant is because New Zealand’s marketplace of political ideas tends to be a second-hand shop. Rogernomics for example, was just the local version of the Thatcherism/Reaganism that still comprises 95% of the policy agenda of National and the Act Party. When Labour eventually repented for its sins, it then adopted (and Grant Robertson still adheres to) the “Third Way” politics of Tony Blair, which tried to soften neo-liberalism by giving it more of a human face. Now, we’re watching Luxon peddle the similar line of ‘compassionate conservatism’ that his mentor John Key borrowed from David Cameron, who borrowed it from George Bush.

Is there really that much of a difference between the caring capitalism of Labour, and the compassionate conservatism of National? Not as much as you or I might like. Caring, sharing, being kind to one another… Does anyone out there remember the Care Bears? The only reason to do so is because New Zealand seems at serious risk of turning into the Kingdom of Care-a-Lot. We’ve already had several years of Jacinda Ardern doing double duty as Funshine Bear and Tenderheart Bear, and now Luxon seems to be doing his level best to promote the bitterly divisive politics of austerity under the cuddly guise of Friend Bear. Election 2023 could be a risky place for the sugar intolerant.

Huzzah, Charlotte Bellis is coming home. It would seem that she has ultimately decided to accept the offer made to her. While one hesitates to intervene in the love match between Bellis and the mainstream media…. Was a return to Afghanistan to have her baby ever her only option? Among other things, the written statement issued earlier this week by Covid Minister Chris Hipkins indicated otherwise. There was a public interest, surely, in allowing the full context of this furore – and not merely Bellis’ version of it – to be out in the public arena. A journalist of Bellis’ stature surely, would not wish to go to court to muzzle the media’s ability to report from all sides.

On the available evidence, it seems that Bellis was asking for pregnancy-related emergency entry, and also for the MIQ emergency rules to be bent to fit in with her personal timetable. Allegedly, she had not responded to offers of consular assistance that might have been of benefit to her. Initially, she also allegedly refused to be granted entry on the grounds of the dangerous situation she is in – and this refusal was despite the widespread and sympathetic media reports of the potential risk to herself and her baby – if she had ended up giving birth in Kabul. Bellis appeared to be seeking sympathy for the risk, while (valorously?) refusing to take the steps that might well have eliminated it entirely. Somehow, this situation was being depicted as being entirely the government’s fault.

Pregnancy should qualify a NZ citizen automatically for re-entry to this country. But just as surely, Bellis chose to return to a country that happens to be one of the most intolerant countries on Earth when it comes to the sexual lives of women in general, and unwed mothers in particular. Right now, the Taliban are killing people on moral grounds. She is being spared, presumably because she is of use to them. Perhaps the Taliban are media savvy enough to know the value of Fox News coverage that quotes Bellis to the effect that “The Taliban Helped Me; My Country Won’t.”

Muzhgan Samarqandi, an Afghan born woman living in New Zealand has written an eloquent article that both sympathises with Bellis and raises serious questions about her apparent insensitivity.

Charlotte refers to herself asking the Taliban in a press conference what they would do for women and girls, and says she is now asking the same question of the New Zealand government.I understand there are problems with MIQ. And I understand the value in provoking change with controversy. But what I don’t understand is how someone who has lived and worked in Afghanistan, and seen the impact of the Taliban’s regime on women and girls, can seriously compare that situation to New Zealand.

Afghanistani women who resist or protest the regime are being arrested, tortured, raped and killed. Young girls are being married off to Talibs. Education and employment are no longer available to them. A 19-year-old girl I know from my village, who was in her first year

of law last year is now, instead, a housewife to a Talib.There are so many stories like this.

And therefore in sum:

New Zealand is no paradise, I have experienced my fair share of racism here, and I am sure the MIQ situation can be improved. But relying on the protection of a regime that is violently oppressive, and then using that to try to shame the New Zealand government into action, is not the way to achieve that improvement. It exploits and trivialises the situation in Afghanistan, at a time when the rights of Afghanistani women and girls desperately need to be taken seriously.

Well said. Why did Bellis embrace the peril to herself and her baby by returning to Kabul, thereby putting them both in harm’s way? Why clamour for re-entry, and then expect MIQ to comply with her request for a delay to match when she would prefer to be rescued? None of those questions deny Bellis her right to have her baby here, in safer conditions, and thus have her baby enjoy the rights that accrue from being born here.

Other people with emergency needs are managing to respond to the timeframe for travel – 14 days – that an emergency implies. As it has done before during the pandemic, the media has provided a rather unquestioning platform. One can sympathise with Bellis, and with tourism operators suffering during the pandemic. Yet surely, it is the media’s job to keep some distance and explore how much, if any, of their plight had been self-inflicted.