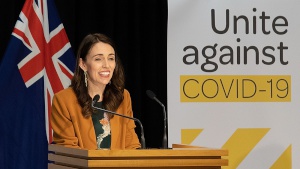 Great poll results last night for the centre left. The Newshub/Reid Research poll had Labour up by 1.6 points to 44.3%. Taken together with the Greens rise to 9.6% (up 2.4 points) that puts the centre left bloc on just under 54%. That’s streets ahead of the centre right bloc, which recorded only a dismal 39.3% level of support. The big loser last night was the ACT Party, which saw its support halve, falling by 8 percentage points. These are hard times for flashy opportunists. Currently, the voting public is not buying the used car policies that the centre- right is trying to offer them at new car prices.

Just over half of ACT’s lost support went to National, which rose to 31.3% by cannibalising its junior partner. At this point, National Party leader Christopher Luxon still seems to be struggling to grow the wider centre-right vote. Sure, he is more popular than the political hemlock previously on offer from Judith Collins and Simon Bridges, but that’s not saying very much.

The poll was conducted between January 22 and February 4 which makes it unlikely that the government’s February 3 announcement of the Covid-related border changes had any bearing on the poll findings. Evidently, the media rumpus over rapid antigen tests did not make any inroad into support for the government’s general stance. Over the course of the pandemic, the public has consistently supported the government’s combo of a cautious regard for public health, pursued in tandem with strong RBNZ/Treasury support for the economy.

National, by contrast, has seemed happy to be seen as the narrow champion of business interests at the cavalier expense of public health and safety. Finally under Luxon, National is managing to shore up its core support but – on the polling evidence over the past two years – its priorities seem unlikely to be shared by the wider public. (Surprise, surprise, the public puts its own safety and that of its loved ones ahead or the needs of business operators.) For much the same reasons though, the risky border openings will be a two edged sword for Labour. – Depending on the health outcomes, the openings may well jeopardise what to date, has been Labour’s strongest card.

In the short term, and given how the Charlotte Bellis saga dominated the headlines in the middle and towards the end of the polling period, it is entirely possible to argue that it was Bellis’ and her obnoxious capacity for self-promotion that alienated the general public, and swung it back in behind the government and the MIQ system. For a brilliant summary of the Bellis saga and what it signifies, this article called “The Reporter Without Borders” has been the best thing written about the Bellis affair, IMO.

Isolating your sorry self

OK, we get it, there’s a Covid storm coming. The medical experts have warned us to hunker down, and the government wants us to self-isolate somehow, somewhere, if and when the virus gets detected in the immediate vicinity. Until we stop doing that too. Because according to Covid Minister Chris Hipkins, the virus will soon be everywhere. Team of Five Million, meet Open Slather.

The country’s five step journey to full exposure to inbound potential virus carriers will begin on February 27. In stage one, vaccinated New Zealanders resident in Australia (and an expanding list of workers currently offshore but deemed essential to the economy) will be allowed back in without the hassle of doing MIQ. Gradually, vaccinated essential Aussie workers will be next, though they supposedly need to be earning at least 1.5 times the median wage to qualify for entry. However, lower paid essential workers ( those working in aged care?) may also be allowed in, with increasingly minimal safeguards. By October 22, almost everyone from anywhere will be welcome, and a vanishing few of us will be isolating. Good luck.

The government’s excuse for “shifting gears” on the Covid risk is that (a) we have high rates of double vaccination (b) reasonably good take-up of boosters and oh, also (c) a fledgling vaccination programme for 5-12 year olds. All this may prove to be a Maginot Line i.e. an illusory wall of protection. That’s because Omicron is very good at bypassing the vaccine. As this column recently reported, there is research to indicate that a double shot of the Pfizer vaccine can provide immunity against Omicron infection at only a lowly 23% level of efficacy. Boosters can raise that to 70% against infection and just below 90% protection against the onset of severe illness. That’s better, but still below the Pfizer vaccine success rates against earlier forms of the virus. With Omicron, more “breakthrough” infections can be reasonably expected.

The decision to reduce the booster interval from four to three months is also not without some potential downsides. One can see the reason for the rush, given how Omicron changes the odds on the vaccine’s ability to do its job. But…. Remember the debate we had back in mid 2021 about whether it was OK/preferable to have a three, six or eight weeks interval between the two doses of the Pfizer vaccine? The rationale back then for the longer interval was that the body’s defence system benefitted from having extra time to get prepared, and put its T cell ducks all in a row.

The decision that many (desperate) countries have made to shorten the time between being double vaxxed and boosted has caused some of those same misgivings to re-surface. Trying to reduce the risk of initial infection is good – but reducing the interval may also increase the risk of a more severe outcome, given that the body may have been denied the time it needs to develop and maximise all of the safety mechanisms contained in the vaccine’s arsenal. This can be something of a dilemma, right?

…..More data is needed, but there is a risk that shorter timeframes could compromise the effectiveness of vaccines given in multiple doses, experts said. “In general for multiple-dose vaccines … The immune system works better if it has time to mature,” said Dr. William Schaffner, infectious disease expert from the Vanderbilt University School of Medicine.

While studies show that boosters temporarily increase antibody levels, scientists say the goal of a vaccine regimen is to elicit not only antibodies but second-line immune system defenses such as T-cells. Multi-dose vaccines prime the immune system, giving it time to marshal those back-up defenses. Dr. Luciano Borio, a former Food and Drug Administration acting chief scientist, said, “I do worry that we don’t know what impact it may have on the immune system maturation of the doses. Three months seems like a very short interval.”

Conclusion: It is going to be a bumpy ride through Omicron, whatever we do.

Footnote One: It has become a cliché to say that the public health system may be overwhelmed by the Omicron wave. Yet surprisingly little attention has been paid to the ripple effects of that scenario. But if and when some doctors, nurses, specialists, hospital office staff etc catch Omicron (or become close contacts requiring self-isolation) the range of public health services available will inevitably reduce. Logically, the health system will need to conserve its human resources for life-saving situations, and will therefore divert staff away from the merely life-enhancing forms of treatment.. Meaning : the public’s access to clinics devoted to the care of those with hearing loss, chronic pain, loss of vision, injury rehabilitation etc etc could become restricted, if not closed down entirely. This could happen rather quickly.

Footnote Two: The hard and dangerous work done by MIQ workers has been spectacularly successful in keeping most New Zealanders safe, well and alive. Yet the MIQ system has been slagged mercilessly, regardless. This headline last weekend for instance, was a typically nasty example of how MIQ’s actions have been painted as gratuitously cruel. As a rejoinder to the MIQ-hating solipsists out there, I liked Matt Nippert’s recent comment:

Part of the problem with the legacy of MIQ is while people missing funerals is obviously heart-breaking, they’re not invisible like the many funerals the policy seems to have prevented.

A few days ago, the Indian playback singer who has been the most popular vocalist in the world for decades, died of Covid at the age of 92. In the West, you’d have to go back to Elvis Presley to find an artist of comparable significance. Lata Mangeshkar was treasured by all sectors of society in India. Since the 1950s, Lata – and her superstar younger sister Asha Bhosle ( of “Brimful of Asha” fame) – have dominated the soundtracks of countless Bollywood films.

However, Lata could sing anything. She still sounded like a nightingale on Lata Sings Gurbani, a personal favourite containing her renditions of Sikh devotional music. As the actor Dilip Kumar once famously said: “The way the fragrance of a flower has no colour, a flowing spring or cool breezes belong to no country, the smile of an innocent child has no religion, similarly Lata Mangeshkar’s voice is a miracle of nature’s creativity.”

I’d first come across her music in Fiji. Her instantly recognisable voice seemed to be everywhere on the buses, in cafes, retail shops etc. During the mid 1980s, she even played a wonderful concert in the Wellington Town Hall that had somehow been promoted by the owners of the Shalimar Dairy in Aro Street. Upstairs in the cheap seats, I fell in with a bunch of Indian film fans who went into raptures every time Lata would hit the first few notes of any one of her stream of soundtrack hits, selected from amongst the more than 27,000 tracks she recorded, in some 36 different Indian languages in all. At the Wellington concert, the fanboys had schooled me on which film each song came from, with a rough plot outline.

Here’s a Lata track taken from the soundtrack of the 1958 film Madhumati. It had a kind of Manic Pixie Dream Girl meets Vertigo plotline in which a travelling married man falls in love with a bewitching tribal woman (who had a back story where she had been tragically wronged,)only for him to eventually realise that his wife is the spitting image and re-incarnation of this and other women down the ages… Somehow, he hadn’t quite realised that before :

From late in her career, here’s a track from the 2000 film Dil Se, a tragic tale of journalism, romantic obsession, star crossed lovers, violent Assamese secessionist politics, and suicide bombings. Plus Lata’s music.