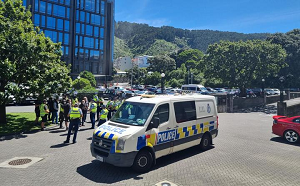 The Omicron surge to 1160 cases a day will inevitably motivate the public to reduce all occasions of risk wherever possible, whether those venues have been formally identified by the contact tracers or not. Cafes, restaurants and other hospitality outlets can expect a further decline in public patronage, and it seems doubtful whether a wage subsidy – even if one was re-introduced – would go very far to bridge the likely shortfall. In Phase Two, all of us former members of the Team of Five Million are now very much on our own. Good luck.

That good luck extends to how serious Omicron proves to be for those who become infected with it. The jaunty claims that it is no worse than a bad cold may be true for a fortunate few, but that’s not the universal – or even the majority – experience. Some reports point out that the initial reports (after Omicron’s discovery in South Africa in November) that fed into the media narrative of “mild” were based on research among largely younger age groups, for whom Covid generally tends to have less severe outcomes.

Even so, the global evidence is that significant numbers of hospitalisations and deaths are occurring – partly because Omicron is so much better at bypassing the protections against infection offered by vaccines. Also, more cases of Omicron infection appear to be occurring among children. In sum:

“I think it’s pretty clear Omicron causes less severe disease than the Delta variant, but that’s not saying much,” University of Western Australia epidemiologist and biostatistician Zoë Hyde writes in an email to The Scientist. “We know that Delta was more than twice as severe as the original strain, and if Imperial College [of London research] is right to say that Omicron is about 40-45% less likely to put people in hospital [than Delta was], we’re back to 2020 but with a more contagious strain.”

Once again, all the very best of good luck.

This past week has been another reason to pine for the good old days. There used to be a time when government mandates about issues like bike helmets and seat belts (and against smoking in public places!) would be hotly disputed as an attack on basic freedoms, but without leading to a mass occupation at Parliament grounds. That sort of thing didn’t happen even after the National Party warned us that the Clark government’s mandates on the size of shower heads to conserve water, was a sign of creeping socialism. First, they came for your shower heads…

All of which is another way of saying that ”Freedom!” is a flexible concept. To some, it means the freedom to remain employed while unvaccinated, even though this means significantly raising the risk of infection, hospitalisation and/or death among their co-workers, and wider public. Not to mention freely piling extra stress upon the hospital system. (All of those competing rights are being treated as secondary or non-existent by freedom lovers.) So what’s to blame for this current impasse? Among the main culprits in the coverage of the Convoy 2022 protest have been (a) “mis-information” (b) social media and (c) the alleged “dis-enfranchisement” of the angry people on the lawn. If only we listened to them, if only we better understood their anger, then this would, um …OK, it probably wouldn’t actually help at all to resolve the current situation.

In the meantime, maybe we should retire the whole notion of “mis-information.” That is not just because over the past two years the Establishment itself has given changing – and at times contradictory – messages about how the virus tends to be transmitted, and how the public should respond to it. Masks were initially derided, and so was aerosol transmission, which is why we all ended up futilely washing our groceries. My bigger beef with the “mis-information” term is that it assumes anti-vaxxers and anti-mandaters lack access to the right information, and ergo, they would supposedly change their position once the light of full and proper information has been shone upon them. There is some room for doubt that this would actually happen. Oh, and besides…

Also if you want to let your hearts bleed for the working classes, let it bleed for the people struggling at work, losing their jobs, living on the benefit under Omicron for reasons that AREN’T the vaccine mandate, because they make up a much larger majority and are getting very little public visibility or sympathy despite not having made any threats to lynch journalists.

Personally, I don’t think the protesters are either mis-informed or lack a rational framework for their beliefs. Instead, there is a clash of ideologies involved, and that polarisation is not going to be dissolved, say, by shutting down social media so that only the“ right” messages get disseminated on it. History tells us that countries that allow only the online messaging approved by the state are not places most of us would want to live in.

IMO, the issue is not mis-information, but selective sourcing by conscious choice. The people on the lawns – in line with their various ideologies and belief systems – have chosen what information they treat as relevant, and what information they ignore. We all do something similar every day. And I agree with Matt Yglesias that regardless, most of us are still, overall, much better informed now than we were 30 years ago, largely thanks to having ready access to the internet and social media. (Don’t blame the tools etc.)

So… The assumption the huddled masses on the lawn are not informed because they don’t share the consensus position on the relative safety and efficacy of vaccines begs the question. Sure, if you poked your head inside many of the tents on the parliamentary lawn, some of those people wouldn’t be able to define the mandates, or articulate an ethical defence for scrapping them. But some would. And some of them would have long ago chosen to place their faith in Joe Rogan’s doubts as to whether Pfizer’s Phase III vaccine trials really were of sufficient duration to be re-assuring enough and be better informed on this point than you oir I. Ditto, some of them can cite what the scientific research says about the contribution Vitamin D can make to bolstering the body’s immune system. (Answer: Some, but not as much as a vaccine.)

In saying that, I’m not suggesting the science on the relative safety of vaccines and their efficacy is in any doubt, any more than the science on climate change. Instead, I’m saying that the term “mis-information” begs the question. And in any case, cause is now less relevant than effect. When laws are being contested, and when information is being selectively embraced to suit, what should happen next ? “Listening” to the protesters, and pondering the decades-long sources of their alienation is not really going to be of much help in resolving this situation.

Before trying to answer the question about what action should now be taken, it may also be worth dealing with a related conceit. The protesters are not “uneducated.” (And they’re not all, or even primarily, working class people denied the blessings of higher education. Some are privileged, tertiary educated New Age hippies.) More to the point, when polarisation has taken place on the scale we’re seeing in the Wellington protests, people are never going to sit down together, swap information, and reach a reasonable compromise. That’s partly because in a very real sense, education can make us more stupid, and not less so. As this Werewolf column indicated some time ago:

Supposedly, education makes you smarter. Less prone to dogmatism. More reasonable, more able to see the grey areas and acknowledge the other fellow’s point of view. Isn’t it one of the comforting beliefs of liberal democrats that if we could only sit down and talk about things reasonably we’d find out what we have in common, and could go on from there? Education, surely, is one of the main gateways to this kind of civilised discourse. Won’t world peace be just round the corner, once everyone’s learned how to think?

Unless of course… Education only makes us crazier, and even more inclined to be set in our ways. What are we to make of this recent piece on Salon via Alternet by Chris Mooney which explores the author’s encounters with what he calls the ‘smart idiot’ effect. On contentious issues, there is some evidence that the more dogmatic and less ‘rational’ positions tend to be taken by people with more education, not less.

Part of the reason being, education can merely equip you with a better vocabulary with which to defend your deeply entrenched beliefs. It can help you to lean in on stupidity.

In recent days, there has been any number of liberal commentaries on what ancient injustices may have led to the Convoy 2022 protests, and what policy changes might conceivably reduce the likelihood of their re-occurrence in the distant future…but as a family member recently pointed out, there is often no liberal consensus on what to do about injustices in the here and now. Should we do nothing, hope that time will magically resolve things, or if all else fails, sanction the use of force? Each to their own conclusion. ( Freedom!)

What is unfolding in Wellington seems to be in line with how similar protests are being handled elsewhere. If you can first get rid of their trucks, then their tents, the people will follow. Unfortunately, confrontation and conflict probably cannot be avoided. If anything, this is as much due to the failure/disinterest of the protesters in generating wider sympathy and public support for their various causes, beyond the already committed. (The protest has probably succeeded in shrinking the size of the minority who oppose vaccine mandates.)

As a previous column mentioned, the relative reluctance of the Police to use force has been a notable aspect of this protest. To put it mildly, the relative tact and discretion shown by the Police on this occasion has not been a feature of their handling of smaller protests against social inequality, arms dealing, and climate change protests that were similarly directed at the disruption of business-as-usual. Clearly, the Convoy 2022 and Groundswell protests have been deemed by the Police to be too big to flail.

Footnote One: Some tow-truck operators are not willing to act altruistically for the greater public good. Shock.

Footnote Two: For a caravan of the allegedly downtrodden and disenfranchised, Convoy 2022 has been able to conjure up an impressive array of expensive trucks and vans, generators, tents, and consistent food supplies etc that would be the envy of almost every other protest groups. Where did this plenitude of material support all come from? Oh right, from an outpouring of support from ordinary folk. Sure.

And to change the subject for a moment to a different realm of conspiratorial thinking … All this back and forth as to whether Russia is/isn’t going to invade Ukraine has raised the possibility being voiced online, that there may be one or two oligarch friends of Vladimir Putin who could be making a killing out there right now on the short term buying and selling of energy futures. Nothing like prior knowledge of invasion intentions to enhance one’s skills at insider trading, right?