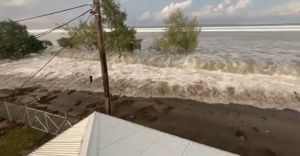 The power of the Tonga eruption (and the size of the aid response being mounted) have been sobering indications of the scale of this disaster. The financial impact is certain to exceed the damage done by Cyclone Harold two years ago, which was estimated at the time to cost $US111 million via its effects on crops, housing and tourism facilities. This time, the tsunami damage, volcanic ash, sulphur dioxide contamination and villager relocation expenses are likely to cost considerably more to meet.

At a wider level, the Tonga eruption is another example of the upheavals that climate change is already causing to small Pacific states, and has exposed the inadequacy of the resources that neighbouring countries have set aside to meet the scale of the need. So far, most of the funds allocated to the so-called “Pacific Re-set“ have gone into enhancing military capabilities rather than into building up our capacity to respond properly to humanitarian need. The Tonga eruption offers pretty compelling arguments as to why that equation will have to change.

The climate change dimension of the Tonga eruption is particularly relevant to countries situated along the Pacific Ring of Fire, since there is some scientific evidence to suggest that a rise in global temperatures is linked to the incidence (and severity) of volcanic activity. More specifically, there is also historical evidence to suggest that when this particular volcano in Tonga last erupted in a significant way – almost exactly one thousand years ago – there were multiple major eruptions at that time. Unfortunately, we may not have heard the last from the Hunga Tonga-Hunga Haʻapai volcano.

Tonga has a population of just over 105,000 people. Reportedly, 8,000 of them live near the (largely undersea) volcano, whose twin peaks were visible on two uninhabited islands situated about 64 kilometres from Tonga’s most populous island, Tongatapu. The initial eruption drove ash plumes 20,000 metres into the air. The subsequent tsunami waves were up to 15 metres (50 feet) high when they reached Tonga’s Ha’apai island group.

While the twin peaks of the volcano are (or were) 100 metres above sea level, these comprise only the tips of a vast volcano hidden below the water, one that is 1800 metres high and 20 kilometres wide. Shane Cronon of Auckland University has provided an invaluable succinct backgrounder on the eruption, and on what might happen next, based on the track record of this volcano.

When glaciers expand, all that ice puts immense pressure on Earth’s surface. “It can affect magma flow and the voids and gaps in the Earth where magma flows to the surface as well as how much magma the crust can actually hold,” [Leeds University geographer Graeme] Swindles says. When glaciers retreat, the pressure lifts and volcanic activity surges. “After glaciers are removed the surface pressure decreases, and the magmas more easily propagate to the surface and thus erupt,”

This is exactly what he and his team found when they looked at what happened as Earth warmed up again and glaciers melted—they counted more eruptions. Again they saw a time lag, this time between ice melt and the rise in eruptions. But this gap was shorter. “It takes relatively less time to melt ice if the temperature goes up,” compared with growing ice when it gets colder, Swindles says. “So if you’re looking at a period of [warming and subsequent] volcanic flare-up, the lag might be a lot shorter.” He also notes that when volcanic eruptions occur during cooler, ice-covered times, they appear to be smaller in magnitude. As the climate warms, eruptions seem to get bigger.

This tentative (but logical) link between ice melting and the incidence and severity of volcanic activity is particularly worrisome, given the threat posed by the Thwaites ice shelf in Antarctica. Some scientists fear this shelf may break off within the next ten years, thus raising sea levels catastrophically around the world. Besides inundating island states and coastal regions all around the globe, the demise of the Thwaites shelf may also trigger more volcanic eruptions, of heightened severity.

The likely dynamics of the Tonga eruption were very well explained by Cronin. As he says, if super-heated magma enters seawater slowly, an insulation film of steam can allow the outer surface of the magma to cool.

But this process doesn’t work when magma is blasted out of the ground full of volcanic gas. When magma enters the water rapidly, any steam layers are quickly disrupted, bringing hot magma in direct contact with cold water. Volcano researchers call this “fuel-coolant interaction” and it is akin to weapons-grade chemical explosions. Extremely violent blasts tear the magma apart. A chain reaction begins, with new magma fragments exposing fresh hot interior surfaces to water, and the explosions repeat, ultimately jetting out volcanic particles and causing blasts with supersonic speeds.

As Cronin also suggests, the recent eruptions of the volcano in 2014/15 and 2016 seem to have been only table-setting preludes to this week’s major event. As mentioned, the residues of physical evidence from the last time an event of this scale occurred on this volcano – back around 11100 AD – is that there was more than one major eruption. Inevitably, New Zealand will be called upon to do more. We are about to find out what – beyond responding to the occasional tropical cyclone – being a good neighbour to small Pacific island states will really entail, as the multiple effects or climate change kick in.

There are some truly awful songs about volcanoes with “ Volcano” by Jimmy Buffett being just one case in point. From 1962, here’s the original recording of “Ring of Fire”by Anita Carter. She does a more than decent job of it, and without calling on mariachi horns to help her out.