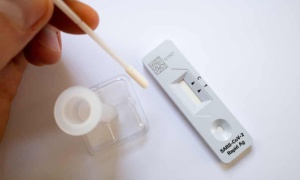 National Party leader Christopher Luxon is being allowed to get away with murder. Luxon is not being challenged over his repeated assertions that the rest of the world has enjoyed ready access to rapid antigen tests (aka RATS) for a year, so why aren’t we? In fact, the reality across the Tasman for the past month has seen a colossal shambles unfold over (a) the availability and (b) the affordability of these tests. RATS have become a case of panic buying on steroids. Amid reports of price gouging, stock-piling, socially inequitable access and empty shelves in chemists and supermarkets, the Morrison government has been roundly criticised on all sides for its handling of the rapid antigen tests issue. Competition watchdogs are now being wheeled in to investigate the mess.

Luxon’s position to the contrary is consistent with the National Party’s penchant for citing Australia as an alternative universe (and all round happy place) that’s supposedly superior to what an allegedly inept New Zealand government is doing. This is (a) despite the carnage and public health system overload that has happened in Australia and (b) despite the fact that New Zealand continues to be the safest place in the world to be during this pandemic. What is also consistent about National’s stance is its dogged advocacy for a profit incentive to be inserted into the Covid diagnostic process. Saliva testing, meet RATS. To that end, it is championing private sector delivery of rapid antigen testing despite the evidence from Victoria and New South Wales that the result will be a law of the jungle competition for access to these tests, with the wealthy enjoying an edge in being able to afford them (a five pack test kit reportedly costs circa $A50 dollars) and to gain access to them.

We’re trying to do it differently here. By rationing the availability of rapid antigen tests and initially restricting them to frontline workers in health, MIQ facilittes and essential industries, the Ardern government aims to avoid the dog eat dog scramble (To use the National Party’s recent favourite word) that has occurred in Australia. Rapid antigen tests can be a useful screening tool in schools, aged care facilities, prisons and workplaces. But they are not a magic bullet. There is a useful MoH backgrounder on rapid antigen tests here. Due to the comparative unreliability of RATS compared to standard PCR tests (some of this is due to differing sampling procedures) rapid antigen tests are not a substitute for PCR surveillance tests. Arguably, they become a more useful red flag only after a community outbreak has become widespread:

The benefits of rapid antigen screening are relative to the amount of disease that is present in a population (prevalence), with greater benefit from settings with high prevalence such as an outbreak of the highly transmissible Omicron variant and rapidly growing cases in the community. At low levels of prevalence, bulk testing of asymptomatic people and the risk of having a false-positive test results will exceed the public health benefit.

National however, seems intent on stoking a ‘panic buying’ clamour for these tests, an approach certain to replicate the retail chaos evident elsewhere. Despite banging on for months about the government’s alleged lack of a plan, National itself has no plan beyond those old Kiwi standbys “Let the market decide” and “She’ll be right.” Does National – for example – have any plan to conserve the availability of these tests, or to subsidise them for those unable to afford the soaring price tag, or to distribute them to disadvantaged members of the community and to poorer regions of the country? Would a limited number of free kits be available to those more vulnerable by dint of age or pre-existing conditions?

Moreover, individual rapid antigen test models vary in their efficacy and how they should be used. Does National have any quality controls in mind for the tests it would apparently allow to flood into the country, unimpeded? Would it require Medsafe to evaluate the tests before approving them for sale to the public, or would it let the cowboys in to peddle their wares to a desperate public? How does National plan to monitor/prevent price gouging? How would it prevent stock-piling and the price scalping that re-sellers would have been given (by National) every motive and opportunity to pursue?

On the evidence so far, National has no plan at all to cope with the consequences of the “leave it to the market” approach in rapid antigen testing that it is advocating. Responsible administrations that grasp that there’s a need during a pandemic to govern for the benefit of all New Zealanders – and not merely for the affluent – have to do things differently. They see the need to ration scarce resources, and to try and ensure that as few people as possible are left behind. But that’s never been National’s priority.

Here’s an Aussie update on the mess in rapid antigen test availability across the Tasman. Some of this will sound very familiar. Someone should tell Christopher Luxon.

Concession card holders are now eligible for 66 million free rapid antigen tests (RATs), but tracking down an elusive kit could remain a problem for weeks until anticipated supplies arrive. More than six million people such as pensioners, veterans and low-income earners can from Monday access 10 free kits per quarter (limited to no more than five per month).

However Labor’s health spokesman Mark Butler said with massive supply shortages of RATs and the efforts required to track them down in the shops, Australia’s most vulnerable were being left “high and dry”. Mr Butler blamed the Morrison Government for a lack of planning which meant the country was still weeks away from receiving much-needed shipments of rapid antigen tests.

Footnote Two: Is there something of a double standard at work here? It would seem to be the case. Think about what the situation would be if the occupants of the Beehive wore a different political label. If National had won the last election, the success (globally) that New Zealand has had in managing the pandemic would be being touted to the skies. The media would be comparing Judith Collins to Margaret Thatcher, as the Iron Lady steering the country with a steady hand through this crisis, while briskly brushing aside (for the greater good, naturally) all the civil liberties quibbles of the academic nay-sayers on the left. Meanwhile, the social media trolls who currently attack Jacinda Ardern for her appearance (and alleged tyrannical rule) would be fawning at the feet of a National PM. Thank goodness, none of us have to live in that universe during the Omicron crisis.

And here once again, is yesterday’s weekly music mix.