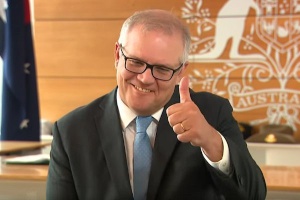 In decades gone by, New Zealanders tended to diss this country by comparing it to how much better things were in the States, or in Australia, or almost anywhere else except the godforsaken town in which we’d had the misfortune to be born and raised. Of late, ACT and National have been reviving that ancient trope, and with even less reason. Since mid 2020 at least, they’ve argued that the pandemic is being handled so much better in Australia. Why, they have rapid antigen testing over there, they’re opening up their borders, they’re getting on with it! (Plus they have television. In colour.)

It was never a convincing argument, but it has been a particularly hard case to make over the past week. Infection numbers are “exploding” in the “emergency situation” now unfolding in Queensland, a state long cited by National as a place we should be seeking to emulate. Moreover, during the past week, rapid antigen testing has turned into a major political disaster for the Morrison government. For example: Here’s a recent article on how badly the access to rapid antigen testing kits (aka RATs) has been handled. Consumers have struggled to find them, supermarkets and chemists have struggled to keep them in stock, and price gouging has been rife.

Writer Marieke Hardy has slammed the Morrison government’s decision to shift the emphasis from PCR tests to rapid antigen tests before taking the necessary steps to ensure the test-kits are (a) available and (b) affordable.

“Everyone’s got backpacks on running from chemist to chemist – it’s just crazy,” [Hardy] said.“It would be funny if it wasn’t so infuriating,.”Ms Hardy said it was hard to follow the federal government’s message to use Rapid Antigen Testing [RATs] when there was none to be found. “You keep trying to do the right thing, and the government is not there to support the community.”

Basically, the Morrison government has made it mandatory (in some circumstances) to produce evidence of having had a recent rapid antigen test, but is not subsidising the test-kits, either fully or in part. Apparently, no discussions have yet been held with state governments to enable the waiving of GST on the test-kits. In typically ham-fisted fashion, Morrison has tried to suggest that this incompetence is really a virtue because such things were best left to the “private market” to deliver. If anything, the situation is getting worse.

Meanwhile, over the past seven days, Australia has recorded 268,859 fresh cases of Covid-19, an increase of 248.7% over the previous seven day period. Only Western Australia, which will remain in tight lockdown until February 5, has been able to match New Zealand’s success so far in managing the virus.

Footnote One: Just before this goes down the memory hole, the most amazing thing that happened over the Christmas/New Year break was what didn’t happen. Despite Aucklanders being free to travel far and wide, there wasn’t the feared explosion of Covid community cases. Again, that suggests we must be doing quite a lot of things right. And despite the endless whining from a few loud voices in business, there’s this to keep in mind:

Worldline NZ’s head of data, George Putnam, said that while this year’s number of transactions in the traditional peak hour of Christmas Eve shopping was slightly lower than last year, overall data showed Kiwi retail shoppers had spent more this year than ever before.

In other words, Covid caution enabled businesses to enjoy a holiday period boom. So… Stop whining.

Footnote Two: Obviously, New Zealand still faces the looming challenge from Omicron. Australia has significantly more hospital beds and ICU capacity per capita than we do, but their public health system remains at risk of being overwhelmed by the current Omicron outbreaks. The lack of depth in our hospital reserves – the legacy of decades of systematic under-funding – has been a major reason why the Ardern government has consistently been so cautious. Around the country, we have so little in the way of reserves. This OECD chart of per capita ICU capacity, which puts us second last in the OECD ahead only of Mexico, offers chilling evidence of how the application of market economics to public health provision has failed New Zealanders.

This second chart measures New Zealand’s hospital beds per capita. Again, we fare badly- New Zealand is streets behind the likes of South Korea and Japan – but the really interesting thing about the chart is our steep decline in the ratio of hospital beds per capita for several decades. Sixty years ago, we were as amply provided for as South Korea is today. Subsequently though, we shifted resources out to primary care and/or reduced health services to subsistence level in the quest for economic”efficiency.” (And to make headroom for tax cuts.) Then along came the pandemic, which has exposed the fallacy of pursuing market efficiencies in such a crucial sector.

At this time of year, pundits habitually interview themselves about what the coming year may bring. I’ll keep this brief. The headline holiday news has been that the average house price has just topped the $1 million mark. But since early November, prices for houses and apartments below the top end have begun to flat-line and may even fall as the year progresses. Why is market sentiment changing? The trend can be directly attributed to the new criteria for bank lending phased in from early November, and to the rise in interest rates.

The timing has political significance. Since supply is still increasing at only slightly better than glacial pace, the slowdown is occurring regardless of the regulations on zoning, which Act and National have been banging on for years as being the crux of the problem. (Evidently, zoning is not the key to housing affordability.) More than ever during 2022, there will be multiple housing markets. The average price has been holding up mainly because activity at the top end has been sailing onwards and upwards, relatively undisturbed by either the lending criteria changes or by the tiny flurry of Reserve Bank interest rate hikes. Around the country – and Christchurch, where the house price boom started later, is the current5 outlier here – the slowdown is occurring at the middle/low end of the market.

Unfortunately however, and because the current slowdown is lending related and not supply related, even an average fall in house prices will not necessarily enable many of the battlers to finally get into the market. It is a bitter irony that their ability to borrow has been tightened, just as the prices are beginning to look like they may be about to fall back towards Planet Earth.

The other factor to keep in mind about housing in 2022, is the medium term impact – in Wellington at least – of the recent round of capital ratings assessments, a process that functions (among other things) as a revenue grab by local government. But as rates in some parts of Wellington double and treble in the wake of this review process, the impact on renters (after the new assessments kick in from July 1, 2022 onwards) is likely to be pretty horrendous. There would seem to be nothing (short of a rent strike) to prevent landlords from passing a major chunk of those rates rises onto their tenants, as those rents gradually come up for annual review.

The middle year of a parliamentary term is when the governments normally rams its major policies through Parliament and into legislation, in time for bragging rights during election year. However, since 2022 is also when local government goes to the polls, the Three Waters proposal is looming as a gift issue for populist candidates hoping to ride voter resentment into office.

There’s a possibility though that the protests against Three Waters may have peaked too soon. Arguably, there should now be enough time during 2022 for it to sink in with voters that more burst water pipes, a further deterioration in the quality of drinking water, and even higher rates increases are going to be the likely outcome if the Three Waters plan is allowed to fail. On the stump, the would-be champions of local democracy need to be asked what their alternative plan for capital investment in water infrastructure looks like. Sure, Three Rivers has been copping a lot of flak. But currently, Labour still seems determined to push on with Three Waters this year, rather than allowing the issue to dominate election year 2023.

Since political forecasts tend to be on the gloomy side, lets close with a prediction for 2022 from a different field of soothsaying. According to the astrologers, the “love planet” Venus and the “sex planet” Mars will be coming together in the zodiac on February 16 and again, on March 5. As one astrological website has noted: “This steamy planetary connection usually only occurs every other year or so, but this year it’s happening twice — which doubles our chance to align our romantic values with our passionate desires.” At last, some good news.

Reportedly, Nashville singer/writer Madi Diaz went through a bad break-up in 2017, and in 2021 some of that angst finally saw daylight in her History of a Feeling album for the Matador label. “ Crying in Public” was re-mixed by MUNA, a band that had a great year in 2021, including a very successful collaboration with Phoebe Bridgers called “ Silk Chiffon.” In MUNA’s hands, “Crying in Public” has been transformed from a folkie lament into an EDM banger. Incidentally, the video makes downtown Nashville look like something of a Vegas hellhole, and with no social distancing anywhere in sight.

Here’s the MUNA /Phoebe Bridgers joint track. Bridgers looks like she’s having a good time in a video that lovingly borrows its imagery from the late 1990s satirical comedy But I’m a Cheerleader…in which a then 17 year old Natasha Lyonne got sent off to a conversion therapy retreat to ‘cure” her of her lesbianism. Surprise: it didn’t work.

“New Person, Old Place” is one of the other striking cuts from the Madi Diaz album, and is more in her usual singer/songwriter mode: