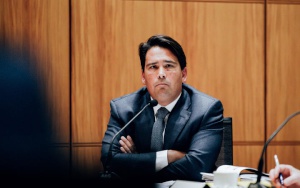 So Simon Bridges has been bounced from the front bench and stripped of his shadow portfolio responsibilities for the crudely “inappropriate” comments that he allegedly made to a female colleague, Jacqui Dean – and personally apologised for – about five years ago. After years of mocking Labour for its supposed fixation on identity politics, it is pretty amusing that the most serious attempt at cancel culture in this country’s political history has been carried out by Judith Collins, the leader of the National Party. David Seymour must be feeling appalled, appalled at this case of political correctness gone mad.

Is this incident an example of Judith Collins showing true moral leadership regardless of the damage to the party’s image and reputation? Or is it an 11th hour act of desperation by a leader who seems willing to burn down the house by making her challenger look as toxic as possible to any waverers in caucus, and especially to female MPs like Nicola Willis, Erica Stanford and Louise Upston? Is this a wretched attempt by Collins to portray a leadership change as an ‘out of the frying pan into the fire” sort of exercise? Probably.

More questions than answers at this point. Some of those questions are to do with the timing of the alleged comments by Bridges, and why they have come to light at this late stage. Did Bridges make them during Bill English’s term as leader, and if so what action( if any) did English make in response ? That might serve as something of a second opinion on the seriousness of the comments at issue. Given their alleged ( by Collins) severity, why have these comments reportedly remained unknown ( until yesterday) to senior MPs such as Chris Bishop.

If an apology was offered by Bridges to Dean at the time, did she accept it ? Moving right along… Who did Dean then vote for – Bridges or Todd Muller – in the subsequent leadership spill? More to the point… If Bishop is to be believed, it seems that Dean did not alert her caucus colleagues on the eve of the Bridges/Muller challenge of the serious nature of the comments made to her. Yet she has now chosen to do so on the eve of the challenge that’s currently in the wind. Why now, but not then? Even allowing for her perhaps needing time to fully process the comments, some clarification on this point might be welcome.

Once again, just as the Labour has been the ropes over the shift to the traffic light system, National has come to the rescue by demonstrating the disarray in its own ranks. Collins, when cornered, can still do immense damage to the centre right’s ability to look like a competent government-in-waiting. In all likelihood, it will now make the leadership transition to Bridges inevitable. For the wider public, this incident is providing a useful reminder that National offers them no good options right now. The public knows both Collins and Bridges all too well, and the caucus divisions have been paid bare for all to see. There’s war once again in the Balkans of the centre right’s largest political party.This can only help the Act Party’s takeover bid.

Footnote One: If Bridges does re-assume the leadership, this means he will be leading the party into the next election. In the coming months, Labour – and PM Jacinda Ardern – will become even more vulnerable by the damage that Covid will wreak all around the country over the summer. Yet in past experience, Bridges is gaffe prone. He totally mis-read the room during the early days of the pandemic.

All along, the plan had been to allow Collins to keep the thankless job of Opposition leader ticking over until such time as the soul of the National Party could be taken out of the cryogenic deep freeze, thawed out and installed in the body of Christopher Luxon preferably only a few short months before Election 2023. Collins could not even fulfil that limited role. Whatever else she may be, Collins is not a mere time-server or a seat warmer. There is no “stable” setting on her political dial. For better and worse, she is always in motion, even if that involves just spinning around in circles. Will Bridges be able to convince the caucus – let alone anyone else – that he will provide a steadier hand at the tiller? National will be hoping that his time in the wilderness has taught him skills that – up until this point – have been invisible to the naked eye.

Footnote Two: There’s one powerful ally that Bridges can count on if he does re-assume the leadership, although it won’t be able to cast a vote for him directly in any leadership spill over the coming days. Namely, China. Before giving Bridges back the keys to the leaders’ office, perhaps there should be a compulsory screening in the National caucus room of this interview between Bridges and a representative of the Chinese media:

The overseas critics were incredulous at the sycophancy that Bridges displayed. There were also critics of the tone-deaf nature of his travel schedule, which included meeting up with the Chinese security chief who had led the crackdown on the Uighurs in Xinjiang. The tour schedule was arranged by then National MP Jian Yang, a former trainer of Chinese spies. The security implications of Beijing’s possible Chinese supporters within the NZ Parliament ultimately came to a head. At a time when China is making serious noises about “re-uniting” Taiwan with the mainland, Beijing will presumably be looking once again to former fast friends like Bridges to show their proven capacity for sympathy and understanding. In short: Bridges has baggage. Installing him as leader is no remedy to what ails the National Party.

Well, that didn’t take long. At least Judith Collins can say she went down fighting, however futilely. And Dr Shane Reti has been promoted to the place-holder post of interim leader, which means… Right now the National caucus is united only on the need to get rid of Collins, but they’re as dis-united as ever as to what should happen next. The next leadership team will not be finalised until a vote on Tuesday.