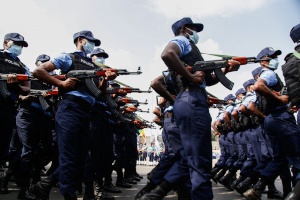 Stuff is still going on in the wider world, despite what happens here regarding Covid. Or in Ethiopia’s case, what happens there plus Covid. Belatedly, the wider world is coming to realise that Africa’s second most populous country is (a) facing a widening civil war along ethnic lines and (b) experiencing a massive refugee crisis and famine, both of which threaten to culminate (c) in the possible unravelling of the entire country. Ethiopia, some European observers darkly suggest, may be heading down the same path as Yugoslavia did, 30 years ago. That process of dis-integration eventually saw Serbia, Croatia, Bosnia, North Macedonia, Kosovo and Montenegro emerge from the ruins of war as independent countries.

Like a lot of the news coming out of Ethiopia – where independent reporting on the progress of the civil war is nigh on impossible – this may be an exaggeration. (Or not.) Certainly, the rebel forces have recently agreed on an alliance between the Oromo Liberation Front (OLF) in the south and the Tigray Peoples Liberation Front ( TPLF) in the north. But are they truly almost at the gates of the capital, Addis Ababa? That’s hard to say. Since the fighting began in Tigray 12 months ago, Western media outlets have been accused (by government supporters) of being a credulous platform for the TPLF’s claims of battlefield success.

All the same, the beleaguered federal government of Prime Minister Abiy Ahmed does seem intent on digging itself into an ever bigger hole. It keeps rejecting the offers by several African countries to help negotiate an end to the fighting and thus enable the delivery of humanitarian aid to the regions now facing famine and massive numbers of civilian refugees. Instead, Abiy has ordered a roundup of UN officials – most, but not all, are of Tigrayan ethnicity – and has expelled them for their alleged complicity with the TPL. This alleged “complicity” with terrorism seems to have consisted mainly of trying to get food into regions where harvests have been disrupted by the fighting, and by the hordes of locusts exacerbated by climate change. Over recent weeks, Abiy has been holding public rallies and whipping up nationalist sentiment against a Tigrayan rebellion whose “terrorist” leaders, he alleges, are in cahoots with a Western-led, neo-colonial plot to remove him.

Ironically, Abiy was awarded the Nobel Peace Prize in 2019 for ending the 20 year old border war between Ethiopia and Eritrea. As the UK Financial Times recently noted, giving Abiy the Peace Prize may have been one of the worst choices in the award’s history, which is really saying something. In fact, the pact with Eritrea has proved to be less about peace and more about an agreement to swivel and target a common foe: Tigray, which borders Eritrea. In 1991, it had been the TPLF forces that finally toppled the blood- soaked dictatorship of Mengistu Haile Mariam. The TPLF had then uneasily co-existed with Eritrea, during the whole 23 years that the TPLF were subsequently in command of the central government in Addis Ababa.

No surprise then that the Eritrean forces and Amhara militia have openly joined forces with the Abiy government in the current war against the Tigrayans. Civilian massacres and incidents of mass sexual violence have been alleged on both sides. In the wake of disputes over the holding of regional elections in Tigray, federal forces launched an offensive into Tigray just over 12 months ago. Since then, the fighting has spread into other northern provinces – Afar and Amhara – as the TPLF has counter-attacked. Unfortunately for Abiy, his federal armed forces were to a significant degree, trained and staffed in earlier years by the TPLF. There have been regular reports of disunity in the government’s military effort.

Abiy’s tenure in office had begun so promisingly, too. On taking office in 2018, he not only ended the border dispute with Eritrea – he also released thousands of political prisoners, encouraged dissidents to return from exile, and opened up the political space for a freer press, and for political opponents to organise. For a country that had endured the deadly likes of the “Red Terror” unleashed by Mengistu in the 1970s and the subsequent iron rule of the TPLF leader Meles Zenawi, Abiy briefly seemed like a fresh beginning. Fatally though, he has spectacularly mis-managed the structural tensions that have long existed in Ethiopia between centralism, federalism and ethnicity.

Partly because of the bitter legacy of Mengistu, Meles Zenawi had de-centralised power by re-jigging the country’s basic structure. Instead of Ethiopia being a unified, centralised republic, Zenawi created a federal system consisting of nine regional ethnic states, and two city states administered by the government in Addis Ababa. This ambitious balancing act has had the downside of further entrenching ethnic divisions. Reportedly, key rights – to land, to jobs and official positions in central and local government etc have been dependent upon ethnic identity, even though many people from the various ethnic communities are dispersed across the entire country, and around the world. In Ethiopia, ethnic identity does not necessarily equate with a territorial base.

It isn’t accidental then, that it was the TPLF decision to forge on and hold regional elections in Tigray that provided the initial trigger for the current war. To all outward signs, Abiy appears intent on re-imposing a more centralised form of governance and if necessary, by military means. Regardless of whether Abiy wins or loses the current war, any successor from among the two main rebel groups will face formidable problems. These will include, but also go well beyond, the immediate challenges on the humanitarian front.

For example: Even if Abiy falls, relatively few citizens beyond Tigray would welcome the TPLF back into power in Addis Ababa. (That explains the talk of Yugoslavia as an example.) Oromo and Tigray might well find it easier to co-exist as independent entities, rather than have their leaders try and work together in some sort of coalition arrangement, nominally federated. Besides, this will still leave other intractable problems like Ethiopia’s dispute with Egypt and Sudan over its Grand Ethiopian Renaissance Dam on the Nile. There will also be the newly awakened hostility with Eritrea. And there will also be difficult relations with Sudan, where a military coup has just taken place and ended a three year experiment with democratic rule. The Sudanese coup leaders were reliable lieutenants of the ousted dictator Omar al-Bashir, and they have strong financial ties ( aka personal corruption links) to Egypt, Saudi Arabia and the UAE. They would be no friends of the TPLF.

Overall, there are no simple heroes and villains in the crisis that’s now unfolding in Ethiopia. Everyone has blood and guilt on their hands. More importantly, there are no obvious solutions for the 117 million people who call Ethiopia home, especially since what that allegiance actually means in practice seems increasingly open to question.

Footnote One: Since mid-September, the Biden administration has been offering sticks and carrots – threats of sanctions alongside promises of aid – to both sides, in order to end the fighting and get the antagonists around the table. However, in a sign of America’s

diplomatic weakness in a multi-polar world, Abiy has so far interpreted these gestures as US treachery aimed at forcing him out of office or into some kind of coalition arrangement more amenable to Western manipulation. Abiy has thus been looking elsewhere – to the Saudis, Emirates, Turkey, Russia and China –for potential support. Sadly for him, that support may not arrive in Addis Ababa before the TPLF and OLF fighters do.

Footnote Two: Ethiopia formally recognises five official languages ( among many more ) and the country contains 80 different ethnic groups. Three major ones – the Oromo 34%, the Amhara 27% and the Tigrayan 6% – have been the main combatants in the current conflict. Superficially, the dominance of the Tigray minority in the military structure is a bit like the situation in Syria, where the Alawite minority have also wielded a disproportionate amount of political and military power.

Footnote Three: Along religious lines, Ethiopia is also diverse. On 2016 figures, 67 % of the Ethiopian population profess to be Christian (largely of the Ethiopian Orthodox faith) while 31% profess Islam, and another large group of Pentecostal evangelicals have been converted by US missionary efforts. In 2016, those P’ent’ay (ie Pentecostal) groups comprised 22.8% of the population. (The percentages indicate there’s quite a degree of crossover in religious affiliation.) In Tigray, 96% of the population are Ethiopian Orthodox Christians. The sizeable P’ent’ay flock may partly explain the support for the Abiy government being expressed recently by some US Republican senators.

The assassination in mid 2020 of the young Oromo musician Hachalu Hundessa sparked protests across the entire country, and served to re-ignite the Oromo campaign for self-rule. Abiy is the first Oromo to hold the post of prime minister, but this did not stop Hachalu from confronting him. Ultimately, and as the BBC reported, Hachulu paid with his life for his fearlessness:

Two months after Mr Abiy took office, Hachalu was invited by the government to perform at a concert held in honour of Eritrea’s President Isaias Afeworki, who was visiting Ethiopia for the first time since the end of a border war between the two neighbouring states. Hachalu proved to be as independent and fearless as ever, singing about the need to achieve justice for people who had been killed in conflict in eastern Ethiopia between the Oromo and Somali ethnic groups, and questioning how a concert could be held when families were grieving.

Government officials later criticised him for singing “inappropriate” songs for the occasion, but it increased his popularity.