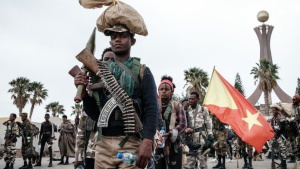 When the United Nations wheels out its toughest language – Yemen in 2017 was /is“the world’s worst humanitarian catastrophe” and (this week) the crisis in Ethiopia “ is a stain on our conscience” this is code. Yes, the United Nations is saying that things are really, really bad in those places, but it is also seeking to arouse the world’s major powers (the US, China, Russia, Europe) to do more to address the situation.

In Ethiopia, the over-riding concern is the prospect of famine on a scale the world last saw during the 1980s, when around one million Ethiopians starved to death. This time, several factors are converging: a bitter civil war is raging between the central government and the northern region of Tigray; locust swarms have struck harvests in northern and central Ethiopia; climate change and Covid-19 are also in play. As Esther Watts, country head of the CARE humanitarian agency said in March:

Rains at the end of 2020 were higher than usual which has also helped create favourable conditions for further locust breeding and is a likely high driver for the intensity of these latest swarms. Ethiopia is currently facing a triple threat crisis with locusts, flooding from last year and COVID-19, and these latest swarms are a real worry and added stress on an already struggling population suffering from high levels of hunger, malnutrition and loss of livelihoods across many areas.

Climate change has been elevating the risk of famine:

Warming seas means more frequent or stronger cyclones, creating the perfect breeding ground for locusts. Heavy rains and mild winters then contribute to the survival of the large swarms that decimate food security and sources of income.

Alone, these factors would have been enough to create a crisis. Yet they are merely the backdrop for the civil war that kicked into overdrive last November, as the harvest season began. After sporadic attacks on government army camps in Tigray by troops loyal to the regional ruling party – the Tigray People’s Liberation Front (TPLF) which had formerly dominated national politics – the central government of President Abiy Ahmed sent troops into Tigray to topple the TPLF, initially with success. Since then the TPLF have re-grouped, regained lost ground and invaded neighbouring regions, such as Amhara and Afar. The tactical reasoning for this expansion of the conflict were recently outlined by the Brookings Institute (link below) :

Tigray forces also took over parts of the Amhara region, seeing the occupation as leverage against their Ethiopian rivals and Eritrea, which now occupies western Tigray (a region claimed by the Amhara). Tigray forces also pushed into the Afar region to establish a strategic corridor into Djibouti to alleviate Addis Ababa’s chokehold on Tigray, where electricity, internet, banking, and basic food and medical access have been down since November. But while TPLF forces remain in Afar, they have failed to secure the corridor. The TPLF’s push toward Bahir Dar, Amhara’s capital, was also repelled by ENDF and its allies.

The TPLF now faces being rolled back by the next government offensive.

Since the civil war began in earnest, there has been a stream of reports in both the international media and by human rights organisations of major atrocities and war crimes being committed against the civilian population by both the government forces and by the TPLF. Eritrean refugees in Tigray have also been targeted. In recent months, the military situation on the ground has see-sawed. There are signs that the central government (newly elected last week)is about to launch a major military counter-offensive.

Food is reportedly being used as a weapon of war:

[UN humanitarian chief Martin] Griffiths has criticised what the UN has called a de facto government blockade of food, medical supplies and fuel to the Tigray region, where the malnutrition rate is now more than 22 percent. Meanwhile, just 10 percent of needed humanitarian supplies have been reaching Tigray in recent weeks, Griffiths said, with the lack of fuel and communication making it all but impossible to reach people and assess the true scale of needs.

For its part, the central government has laid the blame on the TPLF for the difficulties with humanitarian aid delivery, and has accused aid workers of being too close to the rebels. Last week, the central government expelled seven aid workers – including Unicef’s head of operations in Ethiopia – for supposed interference in the country’s internal affairs. Allegedly, this has involved diverting food aid (and the trucks that carry it) into regions controlled by the TPLF. In addition, the central government has continued to deny access to Tigray by Doctors Without Borders and by the Norwegian Refugee Council. The Ahmed government has accused them of “arming” the rebels, and has launched legal cases against some other humanitarian NGOs. In July, Reuters reported that hundreds of Tigrayans in the capital Addis Ababa had been detained by the Ahmed government on the grounds of their ethnicity.

Meanwhile, the humanitarian crisis in Tigray has been escalating:

Seven months into the conflict in Ethiopia’s Tigray region, human rights atrocities and the full-blown humanitarian crisis are alarming, currently pushing 400,000 innocent people to the brink of famine and loss of life. This must be addressed immediately. We do well to remember the 1980s famine in Ethiopia, which led to an estimated one million deaths, many as a result of food assistance being blocked. Of the 6 million in Tigray, 5.2 million people are facing hunger and requiring emergency food assistance. With 90 percent of the population in extreme need of humanitarian aid, the stakes could not be higher.

In mid-September, the Biden administration announced a package of sanctions against both sides of the conflict, with the aim of bringing about some degree of military de-escalation. While even-handed, the White House initiative also underlined the limits of leverage of modern US diplomacy. Ethiopia has other options at its disposal if and when the US and Europe ever do arrive at a unified position on this crisis. Turkey, Russia and China are all potential participants in how this war (and the looming famine) will play out in Africa’s second most populous country.