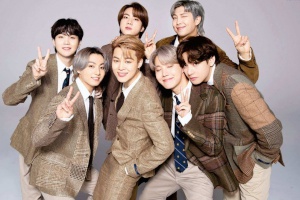 So far, South Korea’s culture industries seem to be pandemic proof. They’re also winning huge global audiences, and not merely large domestic ones. In recent years, South Korea’s TV series (Squid Game, Descendants of The Sun) and movies ( Parasite, Oldboy, The Handmaiden) have become global hits. However, it has been the music industry spearheaded by the group BTS that has made the deepest impression on Western audiences, and on a scale unseen since the hey-day of the Beatles. Werewolf has written before about the immense contribution BTS makes annually to South Korea’s GDP figures. Despite Covid, the BTS success story rolls on regardless, as the Nikkei Asia news service recently reported:

The 2020 chart-topping single “Dynamite,” BTS’ first song sung entirely in English, created an economic effect worth $1.43 billion, according to South Korea’s culture ministry, by spurring huge increases in exports of merchandise and the creation of 8,000 jobs in tourism and other sectors.

This global popularity drive has been the culmination of a plan launched by then-President Kim De-Jung during the late 1990s, to develop South Korea’s cultural industries hand in hand with its information technology firms. For centuries, South Korea has lived in the military and cultural shadow of giant neighbours like China and Japan. This sombre history makes the country’s current cultural impact across Asia and around the world all the more amazing. These days, it is South Korea that dominates them via the soft power influence of K-pop music, fashion and dance.

This Hallyu (Korean Wave) effect has become so pronounced that Beijing’s increasingly paranoid leadership has started cracking down on every manifestation of idol culture – whether it be Korean, Japanese or Chinese in origin. Alienating Chinese youth by banning the K-pop (and K-pop influenced) artists they love (arguably) poses a bigger threat to the survival of China’s authoritarian regime than a fleet of Australian nuclear submarines. The Korean Wave is also making inroads into the structure of the US music industry. The Korean record label Big Hit –now re-named Hybe – has begun to diversify away from its dependence on BTS, which reportedly comprised 87% of its income during 2020. Earlier this year, Hybe bought a 100% stake in Ithaca Holdings, the US entertainment empire that numbers Justin Bieber, Ariana Grande and the Latin star J. Balvin among its roster of artists.

K-pop offers a complete package. Like Detroit’s Motown record company during the mid 1960s – yet on a far larger scale – the K-pop talent factories subject their young recruits to a notoriously gruelling programme that combines singing, dancing, personal grooming, and lifestyle training. All of this gets packaged in music videos, the prime vehicle for marketing K-pop idols to the world. There is a darker side to the story. In 2019, the major label Big Bang was wracked by scandals to do with artist burnout, sexual exploitation and a couple of prominent suicides. The scandals do not seem to have led to any visible reforms.

Obviously, the K-pop music playlist below lacks the music video dimension.( It is worth checking out these tracks on Youtube to get the full impact of the choreography) The playlist doesn’t claim to be definitive. This is just a personal selection. The oldest cut is “Gee” the landmark Girls Generation track from 2008. Before linking to the playlist, I’d like to mention one track from early last year – called “Daewichta” by Agust D – that illustrates how some of the best K-pop draws on a number of traditions besides hip-hop, 1990s US boy bands, and 1960s girl groups.

Agust D is a solo project by Suga, one of the seven members of BT S. The name is Suga backwards, with the D and T being a reference to Suga’s birthplace, Daegu Town. “Daechwita” is the name of a traditional form of Korean music associated with regal and military occasions, and it provides the song’s skeleton. In the video below Suga plays two roles. He’s both the berserk king and the idealistic commoner out to overthrow him, a task the commoner completes right at the point where he is about to be executed. The lyrics name-check Gwang-hae, a teenaged general during the ruinous war of 1592 between Korea and Japan. He later became the leader of the nation, and the nature and worth of his period of imperial rule is still hotly debated.

In interviews, Suga has indicated that he regards the song & the video as a metaphor for his own relationship to the music industry. Ultimately then, in this one brief K-pop song, you can find Suga’s personal impulses to do with dominance and liberation, his ambivalence about the music industry, the fusing of hip hop with Korean music traditions and a primer on Korea’s historical resentments against Japan. Ad on top of all that, it is a pretty cool looking video:

In passing, there are other examples of how tradition has been tapped within K-pop. For instance, this is a pretty enchanting example of the Korean female dance tradition known as Ganggangsullae. The Stray Kids, a relatively new male group chose to include aspects of this tradition in the choreography available here, for their 2020 track“Back Door.” Among hundreds of possible examples, this video for “Baam” by Momoland is not only a typical example of K-pop video values, but of the industry’s global ambitions, with Japanese, Indian, Chinese and French cultural references strewn along its happy course.

If I had to single out an influential piece of choreography, the sensual dance moves on this video for the excellent r& b influenced track “Coming of Age Ceremony” by Park Ji Yoon created a sensation when it was first released over 20 years ago. Years later, you can see a couple of the guys from BTS goof around at a rehearsal and lovingly celebrate it in this video. Meanwhile, Chung Ha’s video for” Gotta Go” is a neurotically intense example (from 2019) of where all of this can lead.

Here’s the playlist. Beneath it, I’ve included notes on some of the artists.

Footnote: “Ko Ko Bop” was a monster hit in 2017 for EXO, and it draws on the “ko ko bop” line contained in Nelly’s old hit “Country Grammar”” which in turn referenced the 1959 single “Shimmy Shimmy Ko Ko Bop” by Little Anthony and the Imperials which was ( in turn) a revival of a great 1956 doowop track by the El Capris, which you can find here. Ah, talk about the rich tapestry of song…

“Gee.” as mentioned, remains an airy, much-loved milestone in K-pop history. Besides BTS, Stray Kids and NCT 127 are two of the most innovative of the male idol groups. Looking for examples of K-pop’s flirtations with noise and (currently) with 70s disco and 80s electro-pop are rabbit holes into which anyone can disappear for hours on end. BTW, the Lisa who sings “Lalisa” is also a member of the influential female idol group Blackpink.

Finally, it is probably worth noting that Korean popular music is not comprised entirely of idol groups. On the back of winning a television talent quest earlier this year, Lee Mujin’s winsome “Traffic Light” has been an enormous hit in Korea during 2021, while being unlike what’s normally considered to be K-pop. It more like a 1970s slice of Californian soft rock about a young guy who isn’t so much into the red or the green of life, but who lives a lot of his time washed in the amber light of indecision. If you’re inclined, you can check it out here.