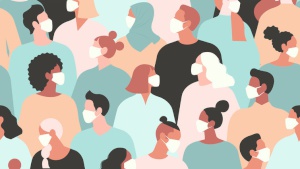 Ay caramba. Only yesterday, Otago University epidemiologist Dr Nick Wilson was still feeling it necessary to suggest that the government should maybe make mask-wearing compulsory, in the likes of schools and workplaces. The chronic official reluctance to do so is still something of a puzzle. From the outset of the pandemic right through until Delta arrived, why have our Ministry of Health – and the World Health Organisation, and the US Center For Disease Control – been lukewarm-to-hostile about the social and personal value of people wearing masks in public spaces?

Here, for one example among many, was MoH director-general Dr Ashley Bloomfield damning masks with faint praise back on April 23, 2020:

“At this point we’re not recommending people use face masks routinely, we don’t think it’s an important part of our overall measures – the most parts are the physical distancing, hygiene and maintaining the bubbles, that’s the really critical thing,” he said….If people want to wear a mask, they should, [but] they should know how to use it. But at this point there is not any indication for routine use of masks in public.” Prime Minister Jacinda Ardern also added that wearing a mask on public transport is not a substitute for social distancing.

Similarly, here’s the BBC, noting the WHO reluctance in May 2020 :

Even at the time, this resistance to masks was a controversial position. From early on, there was evidence that Covid was airborne. Symposiums were being held by proponents of airborne transmission. Editorials made the point, again and again. And weirdly, the evidence from SARs and influenza research should have already, long before Covid arrived, demolished the official theory of disease transmission:

An indoor-air researcher at the University of Hong Kong, [Yuguo] Li had made a name for himself during the first SARS outbreak, in 2003. His investigation of an outbreak at the Amoy Gardens apartment complex provided the strongest evidence that a coronavirus could be airborne. But in the intervening decades, he’d also struggled to convince the public health community that their risk calculus was off. Eventually, he decided to work out the math. Li’s elegant simulations showed that when a person coughed or sneezed, the heavy droplets were too few and the targets—an open mouth, nostrils, eyes—too small to account for much infection. Li’s team had concluded, therefore, that the public health establishment had it backward and that most colds, flu, and other respiratory illnesses must spread through aerosols instead.

Yet as Werewolf reported back in May 2020, the MoH scepticism about airborne transmission left it seemingly hellbent on NOT endorsing the wearing of masks by the public at large:

At one point, Bloomfield indicated that he was waiting for the verdict from the US Center for Disease Control. Then, when the CDC recommended the voluntary wearing of single use masks in indoor spaces ( pharmacies, grocery stories etc) where social distancing is inherently difficult, Bloomfield switched back instead to the position taken by the WHO – which holds that there is no current evidence to make a recommendation for, or against, the use of non-medical masks in the community… At which point, one might have reasonably expected that the precautionary principle would kick in, whereby action is taken in the interim, even in the absence of definitive research evidence

But no. Essentially, the dogged resistance to public mask-wearing was based on MoH/WHO beliefs – check out this rabid WHO tweet from late March 2020 – that Covid was communicated by virus-laden droplets that got breathed, coughed or sneezed out like projectiles….from whence they would allegedly fall and contaminate nearby surfaces and/or hit the ground within the two metre radius that became the rule of thumb for social distancing.

The competing theory was that Covid was transmitted mainly by means of virus laden “aerosols” that got breathed out, and then lingered and floated on the air for some time, while sometimes travelling much further than a two metre social distance radius. Droplets vs aerosols ? This argument dates back to scientific debates about the origins of disease that had raged during the mid-19th century. More on that below.

Over the past 16 months though, the MoH has quietly shifted its stance. To the point where at yesterday’s post-Cabinet press conference. PM Jacinda Ardern could now flatly state that Covid-19 is transmitted via the air. As the MoH/government messaging has changed, our own behaviours have changed in tandem with it. Who washes their supermarket vegetables and groceries anymore? That’s so last year. The prior urgings to practice thorough hand -washing, use hand sanitisers and avoid face touching are now rarely heard. The masks initially viewed by the MoH experts as likely to do as much harm as good, are now being encouraged and/or made mandatory everywhere beyond the home.

Better late than never, I guess. The World Health Organisation and our MoH experts have now quietly accepted that Covid-19 is indeed caught from infected people mainly via the plumes of aerosols they expel. They have also conceded that those plumes can travel beyond a safe, two metre social distance. So far though, the regulations have not caught up. The safe and effective ventilation of workplaces, and of hospitality/accommodation outlets is still not being pursued with the same rigour and urgency that we give to earthquake strengthening. In the interim, the best thing we can do to protect ourselves and everyone else in public spaces, is to wear a mask. Oh, and get vaccinated.

For a telling added example, consider the recent political furore over the safety of people using the Crowne Plaza walkway. Plastic shields would be a brilliant idea if Covid-19 was transmitted mainly by the breathing/coughing/sneezing out of ballistic droplets. But if the infected particles float in plumes instead, then plastic shields would not only be unhelpful but would impede the dispersal of the aerosols. As Stuff reported at the time about Crowne Plaza: “The barrier between pedestrians and those in MIQ is around two metres tall, but without a roof – meaning people are within breathing distance of the exhaling exercisers from isolation.” Exactly. That’s quite a risky prospect, if the virus particles are floating rather than obligingly dropping safely to the ground, before or after hitting the plastic shield.

There is a historical explanation for why the medical establishment has taken so long to concede that Covid (and especially the Delta variant) is conveyed mainly by aerosols. In June 2021, this excellent backgrounder on Substack by Jeremy Chrysler put the response lag down to beliefs that got embedded in the medical mainstream after the mid 19th century victories against other great pandemic killers. Cholera in particular, had long been believed to be transmitted by “ bad air” rather than by bacteria. Meanwhile, the public was drinking the water from the same rivers into which urban sewers were dumping their waste. Once the water sources were improved, the cholera death rate plummeted.

Similarly, as Chrysler pointed out, the Victorian-era death rate among young women was slashed after doctors handling corpses were finally convinced to sterilise their hands before treating women in labour. The reduction in deaths from gangrene by sterilising bandages was another triumph of this new theory of germ science. (A Chrysler points out, the belief in “ bad air” was so pervasive that even a disease known to be caused by mosquito bites was popularly called “mal-aria.”) Given this dire history, one can see why today’s experts were sceptical at first that Covid-19 was being transmitted mainly by air. This must have seemed like such a quaint 19th century notion.

By July 2020 though, hundreds of scientists were signing an open letter calling on official health bodies to change their advisories to reflect the reality of aerosol transmission. The weird thing is that the adherence to droplets theory has not been confined to Covid. As Chrysler points out, the advisory on mumps transmission put out by the European CDC says it spreads via aerosols (and respiratory droplets), but the guidance from the American CDC is still based on the notion that ballistic droplets and surfaces are the key mode of transmission. Likewise, the current advice on flu prevention is almost the same as the early Covid advice i.e. it is still based on the droplets/contact/fluids germ transmission theory that has become our entrenched medical wisdom over the past 150 years.

True, that wisdom has served humanity pretty well. Until now. As Chrysler concludes :

On April 15th, The Lancet published Ten scientific reasons in support of airborne transmission of SARS-CoV-2. The paper systematically presents the evidence that airborne transmission of Covid is “likely to be dominant,” suggesting that “the public health community should act accordingly and without further delay.” Among its other arguments, the article notes that “…diseases once considered to be spread by droplets are airborne.” The same mistakes about droplet and aerosol behavior that presented with SARS-CoV-2 have been made with many other diseases.The implication here is that it’s not just Covid. This is happening with other diseases because our response to other diseases is based on the same understanding of close contact. That’s why the ballistic-droplet-and-surface advice to limit transmission is the same.

Thankfully in New Zealand, there are signs that this recent “airborne transmission” revolution in our disease transmission thinking is finally gaining some traction on the official response to Covid, at least. The likes of Otago University’s epidemiologist Drs Michael Baker and Nick Wilson – who from early on, have advocated the wearing of masks in public spaces in line with the successful mask strategies deployed in Asia – are finally being heard. As of yesterday, the few high schoolers currently able to attend school will have to wear masks. Once schools re-open, mask wearing will presumably be mandatory for all students.

Finally… A little bit of humility might be timely. All very well for the official health authorities to lament the Covid mis-information out there on social media. The MoH and government now have the job of convincing the anti-vaxxers and the “vaccine hesitants” about the scientific case for getting vaccinated. It might be worthwhile to begin that task by conceding that we’ve all been on a learning curve with Covid, many of the medical “experts” included.

There’s no overall theme to this week’s playlist. It includes two instrumental tracks by the American guitarists William Tyler and Marisa Anderson, from their new album together. Also, Mississippi Records has just released a fine new compilation of tracks recorded in the late 1960s/early 1970s by Aurita Castillo, a cumbia singer from Colombia who was reportedly only six years old when she recorded these tracks. “Chambacu” is spookily impressive by any standard, but especially from a girl so young.

The Stray Kids track is a catchy, deceptively simple piece of recent K-Pop. ( Like, it isn’t simple at all.) The r& b singer Shamir Bailey has just released a great revival of the folkie veteran Laura Veirs’ 2010 song ” Gravity Is Dead.” Likewise, the black indie/industrial Oklahoma musician Bartees Strange continues to defy pigeon-holing with his respectful revival of “Lady Luck” by the late Richard Swift, who was a similarly multi- talented inspirational figure. Holly Humberstone is a 21 year old Liverpool art student. Finally, and from her new album Sometimes I Might Be Introvert Little Simz continues to push out the boundaries of what a hip hop album can sound like. Here’s the playlist: