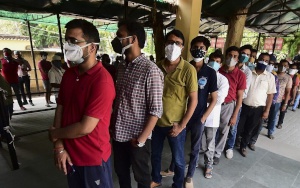 Plainly, the Big Pharma model – where vaccine development, distribution, and pricing is left in the hands of the private sector – is not fit for purpose when it comes to meeting the global challenge of Covid vaccine coverage. Last week, Amnesty International released a major report on how the global response to the pandemic is only accentuating the inequalities in health outcomes between poor and developed countries.

Essentially, the six companies at the forefront of the vaccine effort have prioritised delivery to high income nations able to buy their way to the front of the queue. Pfizer/BioNTech, and Moderna for instance, are set to earn US$133 billion in profits from their mRNA Covid vaccines by the end of 2022, even before the likely future income from “booster shot” regimes has been calculated. Big Pharma’s co-operation with COVAX [the organisation intended to deliver fair and equitable global distribution of Covid vaccines] has been slow and uneven, at best. The Amnesty report has broken down the performances of each of the big six companies:

* Pfizer and BioNTech have so far delivered nine times more vaccines to Sweden alone than to all low-income countries combined – less than 1% of their production so far. High prices mean the companies are set to earn over $86 billion in revenues by the end of 2022.

* Moderna has not yet delivered a single vaccine dose to a low-income country, has provided just 12% of its vaccines to lower-middle income countries, and will not deliver the vast majority of its orders for COVAX until 2022. Higher prices mean it is set to earn over $47bn in revenues by the end of 2022

* Johnson & Johnson has developed the world’s only single dose vaccine and sells at cost price, yet it will not deliver the vast majority of its commitments to COVAX and the African Union until 2022. They have also refused to grant a license to a Canadian manufacturer offering to manufacture millions more doses.

*Astrazeneca has delivered the most vaccines to lower income countries, sells at cost price, and has issued some voluntary licenses to other manufacturers. However, it has refused to openly share its knowledge and technology with WHO initiatives and has opposed the TRIPS Waiver ( that would release IP rights]

Initially, Big Pharma earned a lot of praise for the speed at which the Covid vaccines were created. Much of this credit was misplaced. If anything, this has been a triumph of socialised (not privatised ) medicine, given how Covid vaccine development was financed off the back of billions of dollars of state subsidies and huge government advance orders. But as the Amnesty report says, there has been little in the way of a quid pro quo from the Big Six:

Despite most companies receiving billions of dollars in government funding and advance orders, vaccine developers have monopolized intellectual property, blocked technology transfers, and lobbied aggressively against measures that would expand the global manufacturing of these vaccines.

This obstructive pattern looks like being repeated in the development of the anti-viral medicines to treat Covid infection among the immune-compromised. Last Friday for instance, the World Health Organisation endorsed the work being done by the US firm Regeneron and its Roche joint partner but appealed to them to make the treatment available worldwide, at a reasonable price. The WHO has also asked Regeneron to release patents so that other manufacturers can make bio-similars. Fat chance of that.

The antibody combo has posted data showing it’s effective for those who have contracted the virus and are at a high risk of progressing to a severe form of the disease. It’s also used in those who have severe illness and have not developed a natural antibody. Complicating the endorsement, however, is the cost. REGEN-COV—or Ronapreve outside the United States—is priced at $2,100 per dose in the U.S., $2,000 per dose in Germany and $820 per dose in India.

So far the WHO appeals to Regeneron/Roche to release patents – the pathway to global availability and lower prices – appear to be falling on deaf ears. One of the main effects of releasing patent rights would be to de-centralise vaccine production and enable Third World countries and regions to make vaccines at cost, and far closer to where they’re needed. So far, efforts along those lines at the WTO have failed :

There’s already been one round of debate over the idea of waiving IP rights, but that conversation seems to have passed with a win for the pharmaceutical companies. After India and South Africa submitted a request to waive COVID-19 vaccine IP rights to the World Trade Organization, the Biden administration came down in favour of the proposal. That led to a backlash within the U.S. biopharma industry, which has long contended strong IP laws foster innovation.

That stalemate remains. If it cannot be swayed by moral arguments and by altruism, the developed world should recognise it has a major self-interest in removing the IP barriers to global supply. That’s because the longer that the pandemic is allowed to rage on in the Third World, the more likely it will be that variants will arise there that will spread to richer countries, and thus undermine the protections being provided by the current slate of Covid vaccines. (Until the whole world is vaccinated, none of us are safe.)

The UN efforts run aground

A few days ago, a virtual UN summit on Covid vaccine supply failed to come to grips with (a) the uncoupling of Covid vaccine IP rights and (b) the slow delivery of the vaccines promised to Third World nations. High-income countries have promised to donate more than 1 billion doses, but less than 15 percent of those doses have so far materialised. To the disappointment of many observers, the UN summit chose to focus on finding better ways to re-distribute the Covid vaccine supplies being generated by the existing supply chains, rather than taking transformative action on the IP issue:

The US sought to rally support at the summit for a set of concrete targets that it developed alongside the Multilateral Leaders Taskforce on Covid-19. But it excluded technology transfer hubs, technology access pools, and sharing intellectual property from the list of actions it is promoting as needed to address the pandemic.

True, the WHO and COVAX have launched a few joint initiatives to try and de-centralise vaccine creation and supply. Yet so far, those efforts continue to lack significant support from wealthier countries on the IP matters crucial to global vaccine availability and delivery :

In June, the WHO and COVAX announced a COVID mRNA vaccine technology transfer hub, to be set up in South Africa. In 2020, the WHO created a Covid-19 Technology Access Pool. Both efforts, which seek to enable greater vaccine manufacturing globally, remain hobbled by lack of participation from wealthy governments and companies that hold the intellectual property needed to make Covid-19 vaccine and related products, Human Rights Watch said.

That is just not happening. As Human Rights Watch reports, the rate of progress on meeting those goals remains lopsidedly in favour of the wealthier countries:

FootnoteOne : As this column has mentioned before, it is obscene for the developed world to be clamouring now for booster shots. Given the imbalances cited above, this comment is worth repeating…WHO emergencies chief Dr Michael Ryan recently said the booster shot plan is like throwing out extra life jackets to people who already have life jackets, while leaving the people with no life jackets at all to drown.

Footnote Two: Vaccine supply is also being used as a tool for gaining competitive advantage in the Indo-Pacific region. Yesterday, India PM Narendra Modi told the Quad – the diplomatic arrangement between the US, Japan, India and Australia meant to contain China’s influence in the region – of India’s plans to deliver one million doses of the J& J “Janssen” vaccine to meet regional needs by the end of October.

While not a Quad member, New Zealand was invited last March to be one of a small group of “Quad Plus” observer nations, as the Quad formally launched a mechanism for turning the delivery of Covid vaccines to geo-political advantage, in line with the Quad’s overall efforts to combat the influence of China:

They [ the Quad] reviewed [last week] the progress made in implementing the Quad Vaccine Partnership that they had launched during a virtual summit on March 12 this year, when they had committed the US Development Finance Corporation’s support to the Biological E Limited of India to augment capacity to produce up to one billion doses of the Covid-19 vaccines, including the one developed by the Johnson and Johnson, by the end of 2022, primarily for supply to the Indo-Pacific region, where the four nations want to the counter the hegemonic aspirations of China.

Footnote Three: For its part, China is also engaging in global outreach and vaccine diplomacy. Last week, it unveiled trial results on a promising new anti-variant vaccine that China has been developing jointly with a Vancouver-based company. Days beforehand, China had also announced the arrival of an airlift of donated supplies of its Sinopharm vaccine to Kenya. (There was much the same diplomatic fanfare as accompanied a similar donation of 200,000 Sinopharm doses to Rwanda in mid-August.) As yet, there appears to be no attempt being made by the US and China to suspend vaccine rivalry and to join forces in a global vaccination drive.

The opening credits sequence for the 1998 anime of Cowboy Bebop is so well beloved that the makers of the new, live action version might have been well advised to try something else entirely. But no. Instead, the just-released opening sequence for the new series does its ham-fisted best to replicate the original. To no-one’s surprise, the Internet has spent the past 48 hours venting about the sacrileges being committed against the anime.

Clues extracted from the footage are notable for not including Ed, the hacker genius and for the inclusion of some of the anime’s most striking villains, including Vicious, Pierrot le Fou and the Teddy Bomber…This again, has only raised fears among fans of the anime that this series – when it finally emerges in November – will prove to be just a live Disney action plundering of the anime storylines, rather than a series striking out (as promised) in its own direction. Personally, I hate to think of what a live action rendition will do to say, the ineffably sad “Jupiter Jazz” storyline.

Here’s the original anime’s opening sequence, and as a bonus, the closing sequence to the anime’s final chapter, “The Real Folk Blues.”

And here’s the lame new version. Among other things, the comparison serves to demonstrate how inept humans are at approximating the speed and the precision of well-drawn anime. That’s the problem. There is so much stuff in Cowboy Bebop that makes sense only as an anime reality.