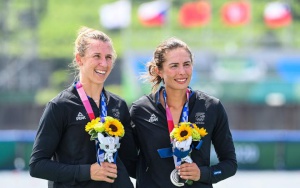 According to Pierre De Coubertin, founder of the modern Olympic Games, the Olympic ideal was not about “winning, but fighting well. Life is not conquering, but fighting well.” True to that ideal, young people from all over the world do still congregate together once every four years to compete peacefully against each other. Yet in 2021, the Games are also marked by rampant nationalism and by the fetishization of winning medals. On the global stage the Olympics long ago became a form of soft power, and elite sport is funded accordingly by those nations that can afford the investment. China’s rise as a sporting superpower, and the decline in the previous dominance of the United States are a mirror of the trends evident in the wider global economy, and in military capability. Rather than serving as a counterweight to nationalism, the Olympic Games have become an extension of it.

In New Zealand, the breast-beating nationalism that the Games comes in a very familiar form. Repeatedly, the media coverage has claimed here and here and also here that we are “punching above our weight” on the world stage. This self-image of Kiwis as a nation of plucky underdogs who – given half a chance – can show bigger, richer nations a thing or two has long been part of our national identity. Victoria University political scientist Michael Warren even wrote a doctoral thesis about it.

With that sort of thing in mind, couldn’t we even become the honest brokers that bigger nations bogged down in their ancient rivalries ask to mediate the global tensions in the Middle East and in the South China Sea? Recently, Foreign Minister Nanaia Mahuta was flattering New Zealanders to that effect.

The sense that our rowers, divers and canoeists are enabling New Zealanders to punch above their weight on the world stage is not something we have entirely to ourselves. India thinks the same about its women’s hockey team. Ireland always thinks that way about its Olympic boxers. Great Britain regards its taekwondo team as having punched above its weight. Australia expected its entire Olympic team to punch above its weight in Tokyo. So… is there any valid method of measuring whether countries are indeed exceeding reasonable expectations of their success at Tokyo2020? Welcome to the vexed world of Olympic medal tables.

By general consensus, it is not “fair” to look merely at which countries win the most medals at the Games. That’s because big countries with big teams and a bigger talent pool will be likely to win more medals across a wider array of sports. Routinely, New Zealand prefers the “medals per capita” measurement, which provides this small country with the “ David vs Goliath” narrative that we like to promote on any occasion when – for instance – our cricket team plays India. So many Indians. So few Kiwis standing in their way.

At Tokyo 2020, TVNZ presenters have claimed more than once that the “medals per capita” computation is the only measure that matters. It serves New Zealand’s purposes to think so. But (a) it is neither true nor any more fair, and (b) it ignores the role played in sporting success by a nation’s wealth, and the resources it can afford to invest in elite sport. Besides if – as TVNZ suggests – you did take “medals per capita” as being your main standard, which country has really been punching above its weight over the years ? Answer : the United States. Even though it has only 4% of the world’s population, the United States had – up until Tokyo 2020 – captured 15% of all Olympic medals ever presented. Conversely at the Rio Olympics in 2016:

At the other end of the scale, five of the world’s most populous countries (India, Indonesia, Pakistan, Nigeria and Bangladesh) have more than 2.1 billion people — almost 30% of the world’s total — and won just six medals combined in Rio.

Right. So the “medals per capita” yardstick obscures a few highly relevant factors. Some of them are cultural, and some have to do with a nation’s relative wealth. In many countries, women are severely disadvantaged when it comes to participation in sport, let alone in their access to funding and priority afforded them within elite sporting programmes. Generally speaking, those countries that are more gender equal when it comes to sports participation and funding, end up winning more medals. Funding, as mentioned, is crucial in gaining comparative advantage. Both overall, and right down to the no small matter of whether Third World athletes have access to the new running spikes and high tech clothing available to First World athletes. They do so only, one suspects, after they have excelled on the global athletics stage. And obviously, that’s something of a vicious circle.

Our funding, our programmes

Since Rio, High Performance Sport New Zealand (HPSNZ) has poured hundreds of millions of dollars into elite sport, a commitment maintained in March 2021, with the announcement of a $273 million government input into HPSNZ programmes.

What these different culturally-driven opportunities and funding inputs suggest is that a “medals per GDP” approach might be a fairer way to assess whether a country is indeed, punching above its weight. On World Bank figures, GDP per capita in New Zealand in 2020 was $US38,521. That is equivalent to 305 percent of the world’s average, and obviously, this gives us something of a head start at the Olympic Games. For Nigeria, the comparable figure is $US2,083. (Australia is even better placed than we are, at $US52,158.) As of yesterday tally on per capita figures, New Zealand ranked third. Yet once those successes were measured in terms of this country’s relative wealth ( ie, GDP per capita) we came in sixteenth. Good, but not quite so stellar.

Habitat also comes into it. We are a small country surrounded by oceans, and blessed with an ample number of rivers and lakes. Easy access to the water and a temperate climate helps us to excel at events where we need to sail, row, canoe, kayak, dive and swim. In addition, our top athletes have relatively ready access to state funding and to 12 year development programmes for elite sports. This may also explain why the finals in our sports of excellence at the summer Olympics tend to see New Zealand up against a handful of relatively wealthy ( and very white) European and North American countries. By and large, the continents of Africa, Asia and South America are not well represented within the sports at which New Zealand excels at the Olympic Games. (Basically, there are not all that many competitive Nigerian kayakers, or Mongolians adept at men’s 49er sailing.) In track and field, our ability to be competitive at the shot put (male and female) has been an exception to the rule.

That habitat point is important. For habitat reasons, other small countries like Iceland and Finland tend to punch above their weight at the winter Olympics. Nothing however really explains why Jamaican sprinters – men and women alike – has been so successful over the past couple of decades at the summer Games. (Jamaica accounts for only .04 % of the world’s population, and its GDP per capita is only $US5, 582. Yet it ranks 7th on the per capita standings and 4th in the GDP per capita medal tallies.

But to return to the original point. Is there any fair and comprehensive way of measuring whether any country is exceeding reasonable expectations? To my mind, the UK Financial Times has made the best attempt at devising a model that takes into account the full range of factors – including population size, GDP per capita and the historical dimension. As in: can a country truly be said to be punching above its weight if it is excelling at much the same level at which it has won medals at previous Games? Here’s the tables and the methodology that the FT used.

On their table, New Zealand is – as of this morning of August 4th- sharing 10th place equal with Serbia and Austria at four medals above what population, relative wealth and past performance would indicate should be the norm. Pretty good, but below other small nations like Cuba, Switzerland and the Netherlands. And also below Australia, which is in third place.

Luckily, poor old Baron De Coubertin never lived to see his Games ideal have to contend with rampant commercialism, soft power nationalism, and the participation of women in perspiration-inducing athletic events, a trend he personally opposed. Still much to be done on that front though. The sexualisation of women’s costumes is not limited to the beach vollleyball court. It is also apparent in the contrast between the costumes for men and women in some of the field events as well. (Unlike the women, men can wear the likes of knee shorts and singlets when long jumping etc.) It is much the same in gymnastics. Given the recent history of the systematic abuse of young female gymnasts, more costume options should be available. The IOC has time for such concerns – raised in vain by the German team over the mandatory volleyball bikinis – now that the IOC seems to have gotten away with the Covid risks it forced upon the city of Tokyo.

Talking about Australia, their men’s rugby, rowing and football teams reportedly trashed some rooms at the Olympic village, including knocking at least one hole in a wall, while also stealing the team mascots. This led Ian Chesterman, boss of the Australian team to make this memorable statement:

“They feel disappointed they have contributed to this conversation about behavioural matters in a team that has been exceptional on and off the field,” he said.

Full of remorse, got it. Yet alas, according to Reuters, the Aussie Sevens team continued to contribute to the conversation about behavioural matters by being really obnoxious on the flight home:

Rugby Australia said later on Tuesday it had launched its own investigation after being informed by Australian team officials of “unacceptable” behaviour by rugby and football players on the flight home from the Olympics. “Rugby Australia has been made aware of incidents involving the Australian men’s Sevens programme…”

Like, whoa. In his own contribution to the conversation about behavioural matters, hip hop artist Black Rob explained how easily this sort of thing can happen to young people when they’re out on the town and away from the influence of their elders and betters…