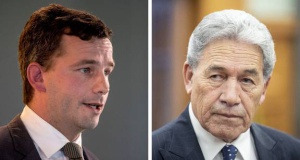 The weekend’s Newshub/Reid Research poll results – Act up to 11.1%, National up 1% but still sitting at only 28.7%, Labour down to 43%, the Greens up to 8.5% – shows that the combined centre right vote is still languishing nearly 12 points behind the combined centre-left vote, 45 months after the last centre-right government was voted out. As much as anything, the latest poll tells us what the political landscape looks like without Winston Peters. Peters’ mantle of retro populism – he was always so adept at campaigning for a better past – is now worn by Act leader David Seymour. People with a grudge have found a new champion.

Closer to the election though, the fact that all of Act’s key policies are over 40 years old is going to become a bit more problematic. Not merely for the voters, but for the National Party as well. As the senior partner, National will have to own the nuttier policy ideas of the Act Party in much the Labour used to be tarred by association with the Greens, before voters came to realise that uh, oh the Greens were onto something with this climate change thing. No such forward-looking revelation is likely from Act’s kitbag of warmed over Thatcherisms : tax cuts for the rich, welfare cuts for the poor, privatisation of state assets, tough on law and order, light on gun control, a dog-whistling virtual denial of climate change… Is this the 1980s retro vision that National’s next leader will really want to carry into Election 2023?

Talking of which, it is obvious that Judith Collins will not be National’s leader at the next election. She is the placeholder until election eve, in order to maximise the sense of relief when the likes of Christopher Luxon get bundled into the top job, on a timeframe that will deliberately deny voters the time to have second thoughts, and to wonder whether Luxon is really Todd Muller: The Sequel. Basically, voters look like being asked to buy a flash new Luxon without getting the opportunity to test drive it.

Meanwhile…. The country’s first mass effort saw some 15,000 people get vaccinated successfully. Overall, the Ardern government continues to manage the pandemic extremely well to the point where the Reserve Bank is being pressured to intervene early on interest rates, in order to dampen down the economic recovery. Across the Tasman, New South Wales is providing an instructive vision of how New Zealand might well have fared under a centre-right government. Until recently, National had been touting the high risk approach of NSW premier Gladys Berejiklian as the model for how we should be proceeding. Open the borders, resume business. That’s the thing with high-risk policies though: they’re risky. And when they fail, other people pay the price.

By and large, the centre-right attack on the government has not been based on competence so much as on feelings of resentment: it’s been a low on substance, high on attitude strategy. The disgruntled are warming to Seymour, and to his depiction of the government as a bunch of over-educated elitists out of touch with heartland New Zealand – why this government is allegedly hellbent on forcing their liberal views down the throats of honest, decent, hard-working Kiwi battlers, cockies and tradies. These salt- of-the-earth types are allegedly held dear by the man from Epsom. Not that mind you, Epsom-ites would want them living next door, exactly.

And what should Labour take from the weekend’s poll. It has lost nine points among the fair-weather friends on the centre right who voted for it last October. Some of the shift has been among former NZF followers, some of it is among the new fans of Act’s crass populism, and some of it reflects the centre-right’s continued despair with Collins. Given this low level of competition, Labour should be doing far better.

With the exception though of the health reform package earlier this year, Labour has looked like it doesn’t know what to do with the mandate it was given at the last election. Seemingly Labour has chosen to interpret that support as a badge for a job well done – even though for most Labour voters, it was actually a licence to press onwards with what still needs to be done. Since October, the ‘steady as it goes’ approach has looked more like a government dead in the water. Labour seems to be so focussed on micro-managing its own political risks, that it looks unwilling – or unable – to lead from the front in dealing with the country’s problems. The poll should be a wake-up call for Labour, but don’t hold your breath.

Footnote One: Labour has proved itself unable to resolve the problem of housing affordability. Unfortunately, few people can seriously expect any better from a National Party that was selling off state houses the last time it was in power. Or from an Act Party more likely to regard the house price spiral as the wondrous workings of the market mechanisms of supply and demand. Act’s only “solution” on housing is to cut the legendary regulatory “red tape” on land use, to build more houses on the city boundaries and leave the provision of say, adequate transport infrastructure to the tender mercies of the market. Hey, if our grandparents never cared a toss about ribbon development or about letting developers build houses on the land we need to grow our food… Then why should Act bother its head about such complexities? Populism likes to keep it simple.

Footnote Two: While the government’s apology over the Dawn Raids of the 1970s is welcome and overdue, it also plays into the centre-right criticism that Labour is more about elite symbolic politics and virtue signalling than it is about dealing with the problems facing the country in 2021.

The racism at the heart of the Dawn Raids – whereby migrant labour from the Pacific was treated as desirable one day and disposable the next, according to the whims of the market- – is being re-played right now by the Immigration Service. People who were attracted here to help out during the pandemic – or who signed up to long term academic courses, or who took up private sector jobs on a reasonable belief that they had a future in this country, are being betrayed. They are being hung out to dry by an Immigration Service that seems chronically incapable of acting in a competent and humane fashion. The perpetuation of such injustices makes a mockery of the government’s expressions of contrition over the Dawn Raids. After all…to be meaningful, surely an apology needs to go hand in hand with a commitment to mend your ways.

One problem with compiling Spotify playlists is that their catalogue of niche music is relatively poor. Try to put together a playlist of gospel music – pre-war and post war black gospel, and white gospel – and there are just so many essential tracks that Sportify simply doesn’t have. Same goes for not-the-obvious classic era reggae music..

So, this week’s playlist on soul music has to be a bit of a compromise. It doesn’t purport to be anything beyond a collection of hits and lesser known tracks worth your time from the golden era of soul music (circa 1962 until the early 1970s). By necessity, there are omissions. To take one example among a dozen : Helene Smith’ mid 1960s cut “You Got To Be A Man” was clearly ripped off by Prince to write “Kiss” but it’s not on Spotify. Here it is anyway, via Youtube:

As for the playlist… Lee Moses came from Atlanta. He was a good singer, an excellent Hendrix-style guitarist and adept on keyboards too, but it all came to nothing apart from the few records he left behind. Moses was active for only a brief period in the late 1960s before he vanished back to relative obscurity in Atlanta. Chicago soul’s ruling genius Curtis Mayfield wrote “Um Um Um” for northern soul favourite Major Lance. He also wrote the great Jerry Butler hit I’ve included here (Mayfield also played his distinctive guitar and did the backing vocals on this track.) He also wrote and provided most of the beautiful vocals on the Impressions track, which harks back to the best of the 1950s doo wop era, while also carrying the style onwards.

“Little Boy Blue” by Bobby Bland is from an earlier era, from 1957, but its soulful weirdness is timeless. The track is not just a showcase for his guitarist Clarence Holloman but stands as a bizarre piece of psychopathology in its own right. It packs in an unsettling range of emotions during its 2:38 running time : regret, guilt, sexual pride, and the urge to console, humiliate and dominate the object of the singer’s raw need. There are not many songs quite like it. Maybe a good thing.

Jerry Butler had several hits in the 1960s before he starting a successful second career as a prominent figure for decades within the cauldron of Chicago local body politics. As I’ve mentioned before, the Homer Banks track was swiped by the Spencer Davis Group for their ‘Gimme Some Lovin’ hit. (Besides the obvious melodic similarities, the bassline is identical.) The troubled life of James Carr aside, he was also arguably, soul’s finest vocalist. Finally, I’ve included Lynn Williams moody “Don’t Be Surprised” partly because of its desperately hang dog lyrics. Don’t be surprised if you find her going mad, or crying on your doorstep, or out on the railroad tracks, with a train running up and down her back. All because she’s lost you, right? That’s soul for you: so down it feels like up. Reuben Bell’s deep soul lament hails from the same neck of the woods.

The final song on this playlist “Cryin’ In The Streets “was inspired by the assassination of Martin Luther King. It could be about the murder of George Floyd, and many others. Here’s the playlist: