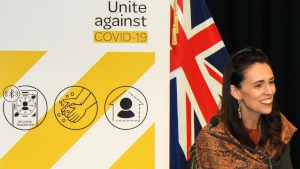 Thesis meets antithesis again, this time in the pages of the New Zealand Herald. A week ago, Liam Dann wrote a column pondering how in contrast to the death and suffering Covid is wreaking all around the world, New Zealanders “are living in an open and thriving economy – with sports events, theatre, music and all the rest.” This reality and the wider work required to address social inequality, Dann felt, are being drowned out by the Covid complainers, “the whingers stuck in a feedback loop of false expectation about plans and timing that simply can’t be realistically met.”

Amusingly, the Herald yesterday published a virtual counter-argument, under the headline “It’s no longer clear Jacinda Ardern’s strategy is the right one.” Unintentionally one assumes, that article epitomises much of what Dann was lamenting. In the light of the threat posed by the Delta variant, Thomas Coughlan argued, New Zealand’s low vaccination rates have put the country at risk. Fair point. In July, that was a key reason why Bloomberg News dropped New Zealand in July from number two to number three in its monthly rankings of how well (and badly) countries are managing their Covid response:

New Zealand, No. 1 in six out of the nine months we’ve issued the Ranking, fell one spot in July to No. 3 as it trails on inoculation and reopening, though locally-transmitted cases and deaths hold at zero.

Now, you could argue that number three is still pretty good. Zero deaths is also something to be desired. Basically, we’re still punching above our weight in the global rankings because the Ardern government is still smashing it when it comes to its prime responsibility: of keeping its citizens alive and well. It has managed to do so while ramping the economy back up again so strongly that the Reserve Bank is now being urged to intervene and hike up interest rates to dampen down the inflationary fires.

True, the whingers habitually complain in response that this economic recovery has been achieved entirely off the back of excessive government borrowing and spending. They’re wrong about that. Borrowing has been entirely sustainable. As Dann pointed out, New Zealand’s 34% debt to GDP ratio is among the lowest in the developed world. In reality, he the recovery has been driven by good prices (and high demand) for our exports, and by household spending. Why are households spending at such a clip? Because they (a) feel safe to spend and (b) because the government’s skill at managing Covid has spared us the spasmodic lockdowns caused by the riskier, premature openings pursued across the Tasman, with horrendous consequences.

Vaccinations on the Down Low

Having identified a genuine weakness in the Arden government’s performance – the slow vaccination rollout – yesterday’s Herald piece unfortunately did not explore why this situation has come to pass. Among the reasons: for the past six months, there have been supply constraints originating with Pfizer. To an extent, New Zealand has been a victim of its own success. Understandably, Pfizer appears to have prioritised supplying its vaccines to more needy people elsewhere. What vaccine supplies we did receive largely went to the most vulnerable, rather than into the kind of speedy mass vaccination efforts that other, more desperate countries were forced to embark on.

Moreover, when faced with a problem of vaccine hesitancy, the Ardern government early on decided to put all of its vaccination rollout eggs in the Pfizer basket. By making that snap decision, New Zealand avoided the confused health messaging still evident across the Tasman, where there has been a lot of public resistance to the readily available Astra Zeneca vaccine. Famously, the Astra Zeneca vaccine has been linked to rare but fatal side effects that have occurred in Australia, and elsewhere. We continue to avoid that damaging situation. At this point, and with our Pfizer supply finally assured, New Zealand is now ramping up its rollout. It needs to. As Coughlan says, the slow rollout here has left a weakness that the Delta variant is poised to exploit. Australia though, with 24% of its population fully vaccinated against our 19% is not in a much better place, even though it has a wider array of vaccines at its disposal. Fiji also has a 24% fully vaccinated rate.

Given the rhetorical misgivings raised by its own headline… if the Jacinda Ardern strategy is no longer the right one, it was all the more dispiriting to see the Herald proceed to give prominence to the failed policies of 2020 as a corrective. In its effort to discredit the Ardern strategy, the Herald – bizarrely- claimed that during 2020 there was never really any alternative to the policies the government followed, however successfully, last year.

The politics of Covid in 2020 was a politics of competence – there was only really one way of doing things and political debate centred around how well governments were able to implement the only strategy that then existed.

This is re-writing history. In fact, during 2020 each of the three leaders of the National Party sharply dissented from the Covid management policies of the government. The centre right was remarkably consistent in trying to stake out different ground. In April 2020, Simon Bridges argued against the extension of the original lockdown. In August 2020, Todd Muller argued that New Zealand should be opening its borders, even to countries with Covid. In September 2020, Judith Collins infamously made this statement :

Australia has dealt with the COVID situation so much better. In every state other than Victoria, if you look at New South Wales, what, they’ve had six or nine deaths, Western Australia, about six… New South Wales actually (has a) bigger population than us, fewer deaths. I mean what does that tell you? I mean for goodness sake, and their economy is booming and you can go to the rugby.”

As Australian fact checkers quickly pointed out, all of these assertions by Collins – except the one about the rugby – were either flat wrong, or misleading. The current point being: contrary to the Herald’s claim, there never was a political consensus last year on how best to manage the Covid threat. It was never a matter of mere variations based on levels of perceived competence. Voters quickly picked up the differences. Throughout 2020, most voters judged National’s alternative approach to be opportunistic, negative, and risky. Ultimately, they rejected it at the October election. They were prescient in doing so. The high risk, early opening, soft lockdown approach – which surely, we all would have been subjected to if National had been in power – has since unravelled, in New South Wales in particular.

Yesterday though, this didn’t stop the Herald from touting it all over again :

With vaccines….- there is an alternative. It involves vastly more infection, slightly more death, and a whole lot more risk. Kiwis, should they choose to spend their lockdown scrolling through their Facebook or Instagram feeds, will notice Americans and Europeans enjoying summer vacations at the beach, international travel, and live theatre. They’re living the new normal – they’re living the alternative.

Yikes. Is this “alternative” still considered by the Herald to be a viable option? It would seem so. It is a fantasy. So…allegedly, Americans are experiencing only “slightly” more deaths while taking summer vacations at the beach etc and “ living the new normal” ? In your dreams. Here’s how the New York Times was reporting the US situation yesterday:

Florida, Louisiana and Mississippi have shattered past known case records and seen hospitals overwhelmed. Hospitalizations nationwide [ in mid summer !] now exceed every previous peak except last winter’s. More than 700 deaths are being reported each day, on average, a figure that has more than doubled since the start of August. Deaths have so far remained far below past records, but can lag case data by weeks.

Worth noting : some 51% of Americans have been fully vaccinated, but deaths are still running at 700 a day. In the UK, where 61.1% of the population have been vaccinated, there were 33.904 daily cases and 111 deaths recorded on the 18 August, and 6,321 people were in hospital as of 17 August 17.. The same exercise can be done with respect to other European countries. The high death rates have driven desperate vaccination rollouts. Globally, the evidence suggests that effective Covid management involves a lot more than the vaccination rates, crucial as those are to building a wall against Covid.

Everything currently suggests that New Zealand is going to struggle to reach the 70-80 target levels of vaccination necessary for any remotely viable form of herd immunity. Even if those ambitious levels were to be reached, the Ardern government would still have to proceed cautiously. After all, it has to govern on behalf of the vaccinated and the unvaccinated alike.It can’t, as the Herald seems to suggest, treat a certain level of death and suffering among the unfortunate, as being an acceptable price of the “new normal.”

In the meantime, as Liam Dann indicated, New Zealanders are in the fortunate position of having a lot of options as individuals in how we choose to experience the pandemic. We can choose to whinge and complain and use the overheated language of “farce” and “failure” and “crisis” as an outlet for whatever angers are gnawing away inside of us. Or, we can choose to build on the victories we have already won against the virus to tackle the work that remains to be done. To paraphrase David Foster Wallace, the reality of our relative success in handling this pandemic is hiding in plain sight all around us. It is so obvious that we risk not even seeing it anymore.

The death a few days ago of Texas singer/writer Nanci Griffith at the age of 68 came after a series of serious health problems over the past 15 years, breast cancer and thyroid cancer included. “Love at the Five and Dime” is probably the track that exemplifies her best qualities. Her wit, compassion and undaunted romantic spirit won fervent admirers all around the world, and especially in Ireland :

That was a Larry McMurtry book she was carrying in the cover shot for her Last of the True Believers breakthrough album. That disc included favourite Nanci Griffith songs like “ Banks of the Ponchartrain” and “More Than A Whisper” Ponchartrrain is of course, the lake adjacent to the city of New Orleans.