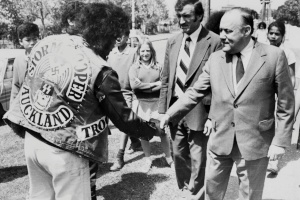 One can sympathise with Human Rights Commissioner Paul Hunt and the lose/lose situation he has just found himself in. If he had stayed safe and snug in the Beltway around Parliament, he would have been stereotyped as a liberal snowflake out of touch with the real world. Yet if he had engaged with the Mongrel Mob on their premises and pointedly refused to pay koha, Hunt would have been derided as the human rights guy who neither understood nor respected indigenous rights and protocol. In the end, Hunt seems to have decided that if he was going to try and engage constructively with the Mob on their turf, he shouldn’t simultaneously set out to snub the culture to which they belong. When in Rome etc.

A media beat-up has ensued. The Great Koha Scandal of 2021 almost makes one pine for the socially liberal days of yore, when Robert Muldoon led the National Party. Here’s how the Te Ara Encyclopedia of New Zealand captioned the photo (below) of Dame Thea Muldoon – pictured sitting between Black Power members Bumpa Mahauraki (left) and Lani Clark:

During his political career, Rob Muldoon developed a good relationship with some gangs, especially Black Power, helping them to find accommodation and form work trusts. They treated him with respect, and Black Power performed a haka at his funeral. Thea Muldoon visited the Black Power marae in Wellington after a memorial service for Muldoon at Wellington Cathedral in September 1992. 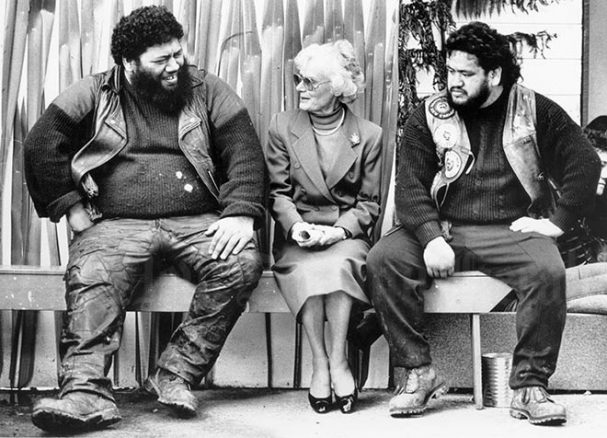 Should we be surprised that the political right in 2021 – National and its Act Party crony – should be far more socially reactionary than Muldoon was, on the subject of gangs? Sure, one can argue that gangs today are more violent and more engaged with drug trafficking than they were in the 1970s and 1980s. But they weren’t exactly fluffy kittens back then, either. More to the point, gangs exist and flourish now – as they did back then – because there is a scarcity of good jobs and adequate support systems in the communities from which they emerge.

Gangs fill a social void. National and Act can try – as the right have done for decades – to suppress them, and jail them. Paul Hunt at least, can see that this approach continues to be a costly failure. Engaging with gangs doesn’t mean you’re coddling them or condoning their criminal actions or granting them a legitimacy they otherwise lack. But because they exist, and because they are in contact with other, marginalised members of society, it is worth talking to them, at least. By c0ntrast, whenever right wing politicians put on their tough boy pants and vow to crack down on gangs…. that approach tends to be one of the gangs’ best recruitment tools. Outsiders will congregate.

Funding Maori organisations to help create good jobs in New Zealand’s depressed rural communities and provincial towns still seems the best way of making gangs redundant. In the meantime, sound policing combined with forms of engagement aimed at trying to minimise conflict is the only (albeit imperfect) way to go. If anything, Hunt and the HRC deserve praise for their courage and initiative in making constructive contact with the Mongrel Mob. Not that the political right care a toss anyway, about finding workable solutions. They’re merely interested in stoking community fears about gangs, for their own political gain.

Footnote: According to the Act Party, the Human Rights Commission is a “hard left” organisation that should be scrapped. Crikey. Here are a few of those allegedly “hard left” proposals that the HRC has championed in the recent past:

…A written constitution that honours Te Tiriti o Waitangi, makes the minimum wage the living wage, creates more employment opportunities for disabled people, builds decent and affordable homes and formulates a national action plan against racism. It [the HRC] also wants a national strategy to deal with family violence, an end to pay discrimination, for police to collect hate crime data, and to make the health and disability system work for all disabled people.

Yes, Heaven forbid that such horrors be raised for debate in New Zealand, let alone made part of official policy.

Using Overseas Information Office information, RNZ’s mining of big data has now thrown up some fascinating patterns about who has been buying (how much) of New Zealand’s land during the past decade. In the eleven years since 2010, some 460,000 hectares of land (a land mass equivalent in size, RNZ points out, to the entire Auckland region) has shifted out of New Zealand control, either through outright sales, leases or rights to take forestry.

By a wide margin, the bulk of it (100,037 hectares) is going into American hands, with the other main foreign contenders being Switzerland (38,527 hectares) Australia (38,427) UK (35,600) and then China with 30, 584. One can imagine the hysterical reaction if China had been a more significant presence within these figures. Yet China’s purchasing profile has been less than a third that of the United States, whose dominance has caused nary a ripple of concern.

The RNZ data mining has underlined our dependence on dairying :

Dairy exports earned nearly $16 billion in 2020, beef and sheep meat exports earned $7.7bn, forestry $5.9bn and wine $2bn. Sale of land to foreign interests over the past 10 years netted around $1.4bn for dairy, $320m for other farming, $530m for forestry and $465m for wine. The value of some transactions are confidential. Interests from the United States bought the most land for forestry, dairy, farming and wine making.

In those foreign land purchases for dairying purposes, China came in second at 18%, but still well behind the 45% of purchases in this sector made by United States interests. Similarly, the RNZ researchers pointed out, United States buyers also purchased several beef, sheep or deer farms, with the UK and the Netherlands ranking second and third as the biggest buyers of this type of land.

This exercise by RNZ is part of their Who’s Eating New Zealand? project , which has tracked the changing patterns of which foreign countries have been consuming the bulk of our various food products between 1990 and 2019. The fluid, easily digested graphs not only show how much we consume locally of the food we produce – 95% of dairy production gets sold overseas – during that period. They also illustrate how those export markets for our produce have evolved over time, and how our trade dependency on China has developed over the past 30 years. All in all, Who’s Eating New Zealand? is a terrific example of high quality, accessible journalism. It should become a goldmine for teachers as a classroom resource.

Music for Chores
If you’re looking for a soundtrack while you’re doing the dusting, the dishes or the ironing… I strongly recommend a band from Brooklyn NY that call themselves A Great Big Pile of Leaves. They combine a stoned mellowness with the fine attention to detail that the household chores demand. Besides solid vocal harmonies, they also (big plus) feature the bright, clean West African guitar sound favoured by early Vampire Weekend and the Scottish band Sacred Paws.

Their songs tend to deal with the mundane minutiae of the choices that comprise everyday life …sitting round wishing, or going fishing? (on “Flying Fish.”) Going out networking and getting ahead vs the pleasures of staying home and eating more pizza? (on “Pizzanomics.”) Here’s “Fun In The Sun” from the band’s excellent 2013 album You’re Always on My Mind. Despite the title this is a melancholy song, but one that manages to keep self-pity at a laconic distance:

Eight years later, A Great Big Pile of Leaves has its next album Pono, due for release next month. Here’s the first single, “Beat Up Shoes.” Not much seems to have changed. Turn out the lights. Stay out at all night. Head out the window…