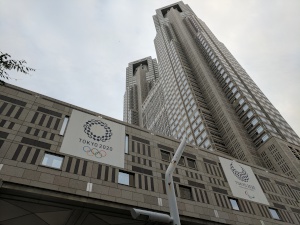 For all involved, this year’s Olympic Games have called for a willing suspension of anxiety. For now at least, the displays of skill and agility have been compelling enough to muffle some of the previous misgivings about the wisdom of asking athletes from all corners of the world to converge in one place in the middle of a pandemic, and at the height of a Tokyo summer.

It doesn’t take a lot though, to bring the underlying anxiety surging back to the fore. The sight of all those empty seats in all those huge (and hugely expensive) stadiums can be triggering enough. After the IOC bigwigs have flown back to Europe, the people of Tokyo – who never wanted this event – will be left to cope with not only the whopping financial loss but the irresponsible uncertainty that Tokyo 2020 could still end up being a super-spreader Covid event for the host nation.

Talk about a captive audience. Tokyo has been held captive by the IOC – the only organisation with the legal power to cancel the Games – and the IOC was in turn a captive of the lucrative media contracts it had signed in happier days, and those media networks themselves were captives of the sponsors who had booked their advertising time in advance.

Tokyo, IOC, the media, the advertising, the viewers. Those have been the five Olympic rings of greed and complicity that have helped to make these Olympics the uncanny experience that they continue to be. The billions of dollars at stake have meant that Tokyo 2020 could neither be cancelled nor shifted to a cooler month that would have been far more fair to the athletes – that is, if the pursuit of athletic excellence was ever really a prime concern of the IOC and the local Japanese Olympic committee who made the initial bid.

For example: back when Tokyo staged the Olympics in 1964, the marathon was held on 21 October, which is mid-autumn in Japan. This year, the marathon will be held on August 8th amid the summer heat and humidity. This risky scheduling is entirely because the US network time in October/November was already booked out by other US sports events. Money, once again, talked louder than the welfare of the athletes, who serve as the expendable extras in this particular big budget reality TV show.

Like troupers, the media has tried hard to sell the package. The NZ presenters have done their chirpy best to side-line the troubling aspects of Tokyo 2020, like the rising Covid numbers and the brutal climatic conditions. The abnormal has been normalised. The media focus has been on the sporting dramas and on a string of “human interest” stories intended to keep alive the fiction that these Olympics are still business-as-usual, and are mainly about the athletic triumphs and disappointments. The fact that this illusion is still as potent as it is – even in the weird, spectator-free context of Tokyo 2020 – is a tribute to the drama that’s inherent in watching elite athletes drive themselves, and each other, to extremes.

The ratings, the ratings
So far, those all-important television ratings have held up in some markets, but not in others. In Australia, and also in Japan, the early TV ratings have been fairly healthy. (In the last Ipsos poll conducted before the Games, 87% of Japanese opposed the Games being held, but 71% said they would probably watch some of the coverage, if the Games did proceed.)

The US ratings have been more of a mixed bag, though it is hard to be precise about the causes, given the unkind time lag that exists between Tokyo and New York (13 hours) and Tokyo/Los Angeles (16 hours.) There is an obvious irony here. The billions of dollars for coverage rights paid into the IOC coffers by the American NBC network was the main reason why Tokyo 2020 took place at all. Yet NBC has reported that only 17 million people tuned in to watch the opening ceremony, the worst ratings for a summer Olympics opening event in 33 years. Moreover, that at-home audience of 17 million was an aggregate of… The live network coverage plus a prime time replay 12 hours later, plus those watching on NBC.com, plus those using the network’s sports app.

True, Rio had also dropped sharply (down 18%) from the London 2012 figures. Yet given the stunning drop-off – 40.7 million to 17 million in only 8 years – it is a little hard to believe that a decline of that size can be attributed mainly to US couch potatoes turning away from cable TV and becoming computer/mobile phone content-assessing nerds instead: especially since (as mentioned) some key online streaming sources were factored into those desperately low early figures. NBC says that it is happy with the audiences for Tokyo 2020 so far, but they would say that, wouldn’t they?

As a previous Werewolf column noted, the TV ratings for elite US sporting events have not recovered from the loss of live sport coverage during the early months of the pandemic. (The 2021 Superbowl attracted its smallest TV audience in a decade.) That trend should be a worry for the IOC, and for the people putting together the financials for Brisbane’s hosting of the 2032 Olympics. After all, the US television ratings have constituted the economic foundation for the entire edifice of the modern Olympic movement. There has to be a question-mark now over whether the Olympic Games is managing to retain its audience – especially among younger viewers, who have a lot of other digital distractions competing for their attention.

Sport still matters a lot though, to some people. It has become a bit of a journalistic cliché to observe that professional sport is now meeting the needs for a communal sense of identity and for the feelings of spiritual transcendence that religion formerly used to provide. As the Guardian sports columnist Jonathan Liew recently put it, sport now satisfies “the wild unquenched craving for shared experience and community, in a society that has essentially hunted it to extinction.”

That’s a key point. The deliberate splintering of every other realm of life that previously provided a sense of shared experience – religion, neighbourhood, workplace, trade union etc etc – has been a prerequisite for elite sport taking its place at the top of the podium as the main socially-sanctioned source of collective identity. Certainly, the powerful needs that sport now satisfy is what gives professional sport its wildly lucrative place in the global economy. Liew’s comments were inspired by the state of English football, but his observations have a wider relevance:

The increasing privatisation of public space…the economic polarisation, the spiteful politics of division: all this has steadily winnowed away the outlets for expressing who we are, in a place, together.

It is not as if this is entirely a one way street. Inevitably, the sporting identity of national teams reflects some of the conditions in the society that produced these particular athletes. Meaning : for better and worse, Australian athletes, teams and fans are not very much like New Zealand sports teams and fans, and vice versa. Two different cultures produced Ash Barty on one hand, and Kane Williamson on the other. Here’s Liew again, on the culture associated with English football:

The vindictive treatment of fans by the Establishment in the 1970s and 1980s essentially created a brutalised, angry rump of mostly working-class men who adopted its snarling fuck-you persona largely because it was the only identity left available to them. And when the game grew again in the 1990s, instead of considering how this culture might be re-imagined and re-integrated, football simply priced them out and hoped they went away. This may explain why Scotland, a more cohesive and less infantilised society than England, produces relatively little trouble when its team plays.

One of the things that inspired Liew to think along these lines was the unexpected social outcome of England’s recent defeat in the Champion’s League final. The media had geared itself up to expect an outburst of destructive rage by disappointed English football fans. Yet apart from a few nasty but isolated examples, that didn’t happen, no matter how hard the media looked for it. The tepid response to yet another English defeat was initially surprising. Yet perhaps not so much, on reflection:

I look at England in 2021 and I do not see a hateful, animalistic place. I see a deeply and deliberately divided country treated with grubby disdain by its politicians: stripped of pride and aspiration and personal investment and simple joy. And so, for all the ominous auguries, perhaps it is little surprise that when its football team loses a major final, it does not go on the tear. It simply sighs, goes home and waits patiently for its next buzz.

In other words, elite sport seems to play a pacifying role in the long run, whatever the fierce tribal allegiances that it temporarily engenders. There will always be the prospect of more sport, and the guarantee of another buzz coming along, a bit further down the track.

Footnote One: As the 538 polling website reported a few days ago, most of the world didn’t want Tokyo 2020 to take place. Interestingly, some of the countries in the 538 survey that were most supportive of the Games proceeding as planned were the highly autocratic societies: Turkey, Saudi Arabia and Russia.

Footnote Two: As for the US, the levels of public support have been consistently lukewarm. As 538 also reported, an Ipsos poll conducted in May and June, found that fewer than half (48 percent) of Americans said they were interested in the Olympics, with only 16 percent of them saying they were very interested. Similarly, a Morning Consult poll found that 51 percent of Americans said they would watch some or all of the Olympics on TV, while a YouGov poll put that number at a lowly 37 percent.

In the light of such figures, we probably shouldn’t be too surprised that Oprah’s interview with Meghan Markle and Prince Harry attracted a far bigger American audience than the Games opening ceremony. Taken together, the pre-Games polling and the TV ratings support the conclusion that thanks largely to the pandemic, anxiety has significantly eroded the socially engineered escapism that elite sport used to provide in happier times. In New Zealand and Australia, where the pandemic has had less impact, it has been far easier for the media to pretend that the Games of Tokyo 2020 still have the same old sparkle.

Having seen how implacably the well-being of (a) the athletes and (b) of the host population of Tokyo have been sacrificed to commercial ends at Tokyo 2020, you have to wonder how come the IOC hasn’t ever thought of adding a few animal extras to the spectacle…

From Japan, here is the trail-blazing electronic musician Haruoni Hosono with his typically humane and wonky celebration of the world of sport: