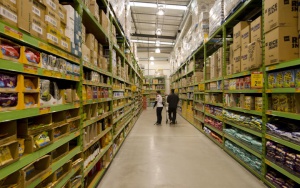 Are we paying too much for our groceries? Hmm. Is the Pope a Catholic? Given that the two Australian supermarket chains that dominate our grocery industry routinely rack up profits in the order of $22 billion annually, that’s a no-brainer. Yet as with New Zealand’s other socio-economic problems created by our 1980s reforms, the practical solutions seem pretty thin on the ground. As with banking, electricity generation/retail pricing, the fledgling telecommunications sector etc those hallowed “free market forces never really had a dog’s chance of functioning adequately in a country as small as New Zealand. Markets simply converged. What we got landed with were cartels, duopolies and near-monopolies. Which has meant that the consumer continues to be screwed. And why bother with innovation – see Telecom in the 1990s – when you can just harvest the money from what are in essence, captive markets?

How to fix these runaway problems? Well, the Commerce Commission has been asking itself whether the two supermarket chains have been fixing prices and mistreating suppliers who – reportedly – have been cowed into silence for fear of having their products banned from the supermarket shelves. Also, the supermarkets generate their own brands, and these routinely get given superior shelf apace and display positioning.

Yep, the Commerce Commission has concluded in its draft discussion document released this morning, there are problems aplenty with our current supermarket set-up. According to Anna Rawlings, the chair of the Commission’s working group, “the major retailers appear to avoid competing strongly with each other, particularly on price.” Duopoly power was serving to deter new entrants who – even if they were ready, willing and able – would lack the necessary access to wholesaler suppliers and to suitable land on which to build their stores. As things stand, most wholesalers have no option but to continue to rely on the duopoly chains to buy their stuff, even though this so called “ monopsomy” power enables the chains to force the suppliers to carry many of the risks and costs of doing business.

That aside, Consumer NZ ‘s Jon Duffy late last year cited a few of the chronic problems:
“There’s a whole lot of behaviour that we see in the supermarket sector that is indicative of markets where there’s low competition. It’s not just that fruit and veges are really expensive, for example, it’s also that the supermarkets can get away with quite shady discounting practices.”

Loyalty cards restrict the customer’s access to specials, and enable the supermarkets to amass shopping data that can then be further monetised. In the process, privacy has effectively been commodified. If you want to keep your purchasing habits to yourself, you’ll pay a price at the supermarket till for doing so. Consumer NZ again:

“The concern is that it is creating a two-tier system. Those people who care about their privacy and don’t want all of their intimate shopping records used for commercial purposes by the supermarket don’t get cheap or cheaper groceries; those who are less concerned by that can access those discounts…

Tinkering All The Way to the Till

To be fair, it isn’t surprising that the Commerce Commission draft paper is better at diagnosing what’s wrong with our supermarket industry – ie, almost everything – than it is at offering solid solutions. Evidently, what we need are more retailers – either by helping the existing independents to expand their market share, or by inviting in new entrants, from somewhere. And if those plucky go getters do not emerge from the woodwork, perhaps they will need to be created, the Commission says, by smoothing the path of entry. How? Maybe, the Commission suggests, by changing the existing regulations on land use. Good idea, yet hardly sufficient.

To help out the currently beleaguered suppliers, the Commission also suggests a mandatory industry Code of Conduct. If, however, such Code was to do more than pay lip service to the problem, it would need a penalty regime tough enough to induce the chains to comply. The Commission also proposes to protect the suppliers and maximise their selling power to the chains by enabling them to bargain collectively, rather than – as at present – being picked off one by one.

Some forms of pricing information for shoppers – such as mandatory unit pricing – are also suggested. Meaning : this would require the supermarket chains to prominently display the cost per unit of measure (be it say 10grams or 100 grams) and not simply the retail price. There’s a useful Consumer NZ explanation here of mandatory unit pricing. Ironically, this practice is mandatory in Australia, but not so in this country, within the supermarket chains that operate here.

Research shows unit pricing can save consumers money and also stimulate competition between retailers. A recent trial by the Queensland University of Technology found that shoppers armed with unit-pricing information saved on average 11 percent of their grocery bill.

Unit pricing is mandatory in Australia and study co-author Dr Gary Mortimer says it’s “particularly useful” for comparing basic consumables, which make up the bulk of the weekly grocery list….But how retailers display unit prices has a significant impact on whether consumers can readily use the information to compare products and make these savings.

Fine. But like shopping around to make limited savings on the electricity bill, such efforts are no replacement for the structural changes needed to significantly improve the situation. Magical thinking will not cause a gallant third player to gallop into the supermarket industry and lo, create meaningful competition across the land In reality, most rational investors would baulk at the costs of entry, and at the ease with which the incumbents could stymie their best efforts – and would choose to put their money elsewhere.

Only major prosecutions under anti-trust law hold out the possibility of breaking the stranglehold that the chains have on New Zealand consumers. Unfortunately, in their hostility to government intervention, the 1980s reformers didn’t bother to ensure that our anti-trust laws are fit for purpose.

For the past decade, the West has hailed Tunisia as a model of Islamic democracy. Sure enough, the country’s commitment to democratic rule did manage to survive serious economic challenges, transfers of power and attempts by Salafist extremists to de-stabilise the economy. Despite mounting internal problems, Tunisia has still tended to be acclaimed as the one enduring success story of the Arab Spring. After all, the Arab Spring originated in Tunisia in 2010, after the suicide of a poor street vendor triggered street protests that eventually ousted the country’s then dictator, Zine El-Abidine Ben Ali .

Unfortunately though, democracy in Tunisia may have breathed its last, for now at least. Last Sunday, Tunisian President Kais Saied dismissed the Prime Minister, sacked the Justice Minister and the Defence Minister, suspended Parliament for 30 days, deployed security forces around the parliamentary precinct, replaced the head of the national TV network and – as a finale – also closed the offices of Al Jazeera. Rachid Ghannouchi, the Speaker of Parliament has denounced Saied’s actions as a “coup.”

Unconvincingly, Saied has claimed that Article 80 of the Constitution provides him with a mandate for dismissing the elected government if there is an “imminent danger threatening the integrity of the country and the country’s security and independence.” Yet as Foreign Policy magazine has pointed out:

There is a significant difference of opinion, however, as to whether Tunisia’s current dire economic problems, parliamentary drift, and a debilitating wave of COVID-19 actually amount to such imminent danger. This would seem to be a problem that the Constitutional Court could adjudicate—but alas, there is no court because either no one can agree on which judges to appoint, or the president has blocked their appointment.

So far, Saied has enjoyed some public support for sacking a Parliament that has been deadlocked and incapable of giving effective relief to Tunisians facing dire economic problems – tourism has dried up – and waves of Covid-19 infections. Saied has now done the easy part. He will now need to demonstrate that his authoritarian rule will be any more effective. How Saied deals with Ghannouchi, now 72, will be crucial. Ghannouchi has been the country’s leading intellectual and Gandhian political activist for the past three decades. He still leads Ennahdha, which remains the largest political party in Parliament, despite it copping much of the public blame for the country’s current economic plight. ( Ennahdha is a bit like South Africa’s ANC in that respect.)

How will the West react to what Saied has done ? So far, there have been only mutterings of “ concern.” As Foreign Policy says, the US government still tends to view Tunisia through a simplistically rosy lens as a success story – which puts the Biden administration at risk of under-estimating the scale of its current problems and the extent of its political divisions. It may also deafen Washington to the desperation with which Tunisians may embrace Saied, until proven otherwise. In other words, a sizeable gap may now have opened up between Westerners and the Tunisian activists, academics and journalists with whom they commonly interact on one hand, and a sizeable chunk of the wider population :

Many[Tunisians] —or at least the ones in the streets in the last few days—seem to have a more ambivalent relationship with democracy. They seem to want a more effective state that can deliver jobs and a social safety net regardless of the character of the political system. It is possible that after a decade in which Tunisians enjoyed greater personal freedoms, the lack of prosperity has made a potentially significant number of them more willing to give some version of authoritarianism another try.

Undaunted by the closure of its local offices, Al Jazeera has continued to report on the deteriorating situation. So far, Turkey – no stranger itself to authoritarian rule – has issued some of the strongest condemnations of Saied’s dictatorial ambitions.

Playlist, Delayed
I’m still putting together for publication early next week, a playlist of relatively obscure soul music. In the meantime, here’s the relatively obscure Canadian songwriter Bob Carpenter. Born in Thunder Bay Ontario, Carpenter released some wonderfully idiosyncratic music in the 1970s, and died in 1995. You may know him from Marlon Williams’ cover version of Carpenter’s “Silent Passage” track… One of his other compositions was about a bad, bad guy called Kenny Wagner :