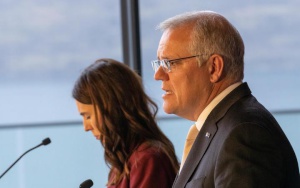 This morning, China announced it is changing its “two child” family limit to a “three child” policy. This looks like a desperate attempt to fix the problems that China is facing with its rapidly ageing population. Hard to see how this change though, will do the trick. In living memory China famously used to have a “one child” policy that it increased to two children for the same reason – and plainly, that move failed to correct the country’s demographic imbalance.

News of this sort should give the West a more realistic sense of China’s relative strengths and weaknesses. In recent years, China has seamlessly fitted into the bogey role that the old Soviet Union played during the Cold War. Allegedly, the Soviets were also an existential threat to the West’s dominance in every corner of the globe…at least until the Soviet Union collapsed internally.

For a while, global terrorism filled the void as the nemesis of the West. Now, it is China. Reportedly, the policy nuances in the China relationship dominated this week’s summit talks in Queenstown between PMs Jacinda Ardern and Scott Morrison.

No doubt, China is contesting – economically and politically – in many parts of the world (eg the Middle East) where it didn’t formerly have much of a presence. In days gone by, the West used to have similar concerns when the Soviet influence began to be detected in Africa. What I’m getting at is the tendency to indulge in what former US Defence Secretary James Schlesinger used to call “ The Ten Feet Tall Syndrome.” During the Cold War, US policy makers used to credit their Soviet rivals with immense strength, vast reserves of diplomatic cunning, massive caches of state-sponsored intellectual firepower and military capabilities that had little to do with the nature, and the scale, of the actual threat.

In an article last week in Foreign Affairs magazine called “China Is Not Ten Feet Tall” analyst Ryan Hass resurrected Schlesinger’s label. His evaluation of China’s political, economic and military situation is a useful corrective to the idea that Beijing is on an inevitable path to global domination. There is no doubt about China’s ambitions to be a global superpower. It is already the world’s second biggest economy. The question is whether it really is on a linear path to achieving the ambitions that it holds. As Hass says. “authoritarian societies excel at showcasing their strengths and concealing their weaknesses.”

On China’s economy, he points this out :

Consider China’s seemingly unstoppable economic ascent. In reality, the challenges over the medium term are significant. China is at risk of growing old before it grows rich, becoming a greying society with degrading economic fundamentals that impede growth. The working-age population is already shrinking; by 2050, China will go from having eight workers per retiree now to two workers per retiree.

That’s the driver behind this morning’s birth policy announcement. Despite all the problems facing the United States, the US economy is still $7 trillion larger on an annual basis than China’s. True, the gap is closing. But in future, China’s growth is likely to be somewhat constrained:

It has already squeezed out most of the large productivity gains that come with a population becoming more educated and urban and adopting technologies to make manufacturing more efficient. China is running out of productive places to invest in infrastructure, and rising debt levels will further complicate its growth path. In the past decade alone, China’s debt has more than doubled, from 141 percent of GDP in 2008 to over 300 percent in 2019. Ballooning debt will make it harder for China to buy its way up the ladder from low-end manufacturing to high value-added production, as South Korea and Taiwan did at similar levels of development.

In addition, China lacks both food security and energy security, and it imports over half of its oil from the Middle East. (Its recent oil deal with Iran will help to address this vulnerability.) Moreover, as Hass says, the Chinese ability to project military force beyond its borders – or even to defend its own borders – is quite limited, and its security position has some very undesirable features. Look at the map. China has fourteen neighbours on its borders. Four of them are nuclear armed and several neighbours – India, Japan, Vietnam – have fairly recent histories of military conflict with China. Not to mention that the US also retains a strong military presence in China’s immediate region.

Five of China’s neighbours also happen to be currently engaged in territorial disputes with China over who owns certain islands, shoals and outcrops in the South China Sea and beyond. In sum, China’s military is not in a strong strategic position at home, and it has almost no ability to project military force much beyond its borders. Oh, and if it came to a military conflict of any duration, China’s Navy would also be unable to secure the country’s supply lines of food and oil.

Lastly, as one considers the three crucial dimensions– the political, the economic and the military – the political one may be where China is at its most vulnerable. Certainly, when it comes to Xinjiang and Hong Kong, China has made it crystal clear that it will not tolerate (a) any internal dissent or (b) any criticism from abroad over what it sees to be its own internal affairs. Yet arguably, this ultra-sensitivity is as much a sign of weakness and insecurity, as it is of strength.

Meaning : China’s political system, as Hass says, combines a Leninist political model that demands the utmost obedience to the ruling elite, with a state-led economic system. This combo makes for a rigid system in which those at the grass roots convey information upwards only at their peril.

The punitive, top down inflexibility means that the Chinese Communist Party is systematically unable to recognise and respond to emerging problems in its midst – as we saw in the early response of the Chinese authorities to Covid-19 – out of fear of the retribution likely to be imposed by those further up the party ladder.

Under Xi’s rule, power has become ever more centralised, and the room for policy innovations has shrunk accordingly. In short, this does not seem to be a sustainable political framework that’s likely to serve China’s long term future needs very well. Not is it a model that many other countries would ever willingly, want to emulate.

More than most other countries, Australia and New Zealand have let themselves become dependent on China’s willingness to buy what we produce. (All that effort put into market diversification has left New Zealand just as dependent on China as we ever were to Britain in the early 1970s.) A key part of China’s image of global assertiveness has been its readiness to bully the likes of Australia, Bhutan, South Korea, and Taiwan into acquiescence.

That’s why it seems important to keep China’s weaknesses in mind, as well as its strengths. Doing so should help to save us from being panicked into making appeasement gestures, for fear of doing anything that could provoke an angry response from Beijing. China has become very skilled at deploying its displeasure, in order to achieve its strategic aims.

New Zealand might have been hoping that the Biden administration would give us more space to play our usual double game – whereby we align ourselves with China for trade, while relying on the US and Australia to meet our defence and security needs. Instead, that room is shrinking. To the applause of old school defence veterans on both sides of the Tasman, Kurt Campbell has been appointed as the White House co-ordinator of policy on Asia.

Campbell was the driving force behind Barack Obama’s “pivot” to Asia, and he has long advocated for the US to rebuild its traditional alliances – from Australia, to Indonesia to India – in order to counter the inroads that China has been making.

This week, Campbell – and Biden – have been talking tough:

“The period that was broadly described as engagement has come to an end,” Kurt Campbell, the U.S. coordinator for Indo-Pacific affairs on the National Security Council, said Wednesday at an event hosted by Stanford University. U.S. policy toward China will now operate under a “new set of strategic parameters,” Campbell said, adding that “the dominant paradigm is going to be competition.” Chinese policies under Xi are in large part responsible for the shift in U.S. policy, Campbell said, citing military clashes on China’s border with India, an “economic campaign” against Australia and the rise of “wolf warrior” diplomacy. Beijing’s behaviour was emblematic of a shift toward “harsh power, or hard power,” which “signals that China is determined to play a more assertive role,” he said.

Yikes. That can only mean greater US pressure on us to step up, and do our traditional bits on defence and security. Plainly, it will not easy for New Zealand to avoid (a) being spooked by the US and Australia into exaggerating the China threat or (b) being spooked into acquiescence by China, for fear of arousing anger that could have trade repercussions.

Well, we’ve become pretty adept over the past two decades at lowering the expectations that Washington and Canberra have of us. Now we have to display a similar willingness to call China’s bluff, and without cringing as we do so. To repeat: China is not ten feet tall.