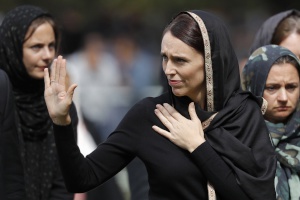 Plainly, a whole lot of New Zealanders – including PM Jacinda Ardern – are not on board with They Are Us, the mooted film project intended about the Christchurch mosque shootings. Here’s how the original Hollywood Reporter story described the gist of They Are Us :

The film — being introduced to buyers[at the Cannes virtual market] by FilmNation Entertainment, with CAA Media Finance overseeing domestic[US] sales — will give Ardern, hugely respected internationally for her handling of the COVID-19 pandemic, the honour of being one of very few political leaders given the biopic treatment while still in office…..Billed as an “inspirational story about the young leader’s response to the tragic events,” the story will follow Ardern as she helped rally the government and citizens behind her message of compassion and unity and ban assault rifles in New Zealand.

A couple of days ago, the Hollywood Reporter did a follow up story about the backlash In New Zealand against the project. It unsuccessfully sought comment from FilmNation, the highly successful production, financing and foreign sales firm that had marketed films such as The King’s Speech, Arrival and The Big Sick. Yet the real drivers of the film project are the quartet mentioned in the first Hollywood Reporter story: namely, New Zealand born writer director Andrew Niccol, local film and TV producer Philippa Campbell, Ayman Jamal. the head of the Dubai-based animation and FX production house Barajoun Entertainment. and the veteran British film producer Stewart Till.

Footnote : Philippa Campbell has just announced she has withdrawn from the project.

To date, Jamal is best known for the 2015 animated film Bilal: A New Breed of Hero. This sumptuous looking ‘feel good” animated feature told the story of a warrior colleague of the Prophet Mohammed. It had an uplifting triumph-over-adversity storyline, amid disturbing lashings of violence that several US critics noted were somewhat at odds with the supposed peaceful intentions espoused by Bilal’s makers. Back in 2015, here’s how the Variety reviewer had described the film:

Opening titles push both the social justice side — “humanity’s struggle for freedom and equality” — along with the “inspired by a true story” element, though as usual with such things, inspiration can be quite a leap from history. Yet for a children’s film… the amount of slaying sits uncomfortably with the underlying message of tolerance.

Jamal’s self-declared goal has been to make mass appeal entertainment that promotes a message of understanding and tolerance towards Islam. “His main goal is to develop and produce stories that are inspirational and worth spreading among the youth worldwide in addition to participate in developing the movie making industry in the MENA [Middle East North Africa] region.” Clearly, They Are Us would fit that bill, and might well be seen by Jamal as an avenue of expansion for his film company into mainstream Western markets. In short, Bilal wrapped a message of tolerance in a package of violence. Christchurch, beware.

It isn’t scary. It looks comically cheap at times. The performances range from inconsistent to fairly awful. And unless the Emmys open up a category for Outstanding Use of Multi-Colored Contact Lenses, it’s unlikely to get any real respect.

Reach, Grasp etc.
As for Andrew Niccol… Niccol made his debut nearly 25 years ago with the science fiction drama Gattaca. The stellar cast for that one included Ethan Hawke, Uma Thurman and Jude Law. Since then he has written and directed several respectable mid-budget films. Overall though, the critical consensus has been that the ideas behind Niccol’s films tend to be far more interesting than what turns up on screen. Time and again, his reach appears to exceed his grasp. Of his most recent film Anon, this reviewer made that point in the laconic opening line of her review: “I can imagine that writer/director Andrew Niccol is exceptionally good at pitching his scripts.” Then came the bad news :

But this movie has the same problem as his other futuristic constructs, where Niccol trips over himself trying to explain his latest nifty contraption….Even with the vicious killings and the sparks that arise, the investigative procedure of “Anon” can be as much as fun as listening to someone explain every single rule of a board game, when all you want is to just start playing.

In sum, the likely creative problems with the They Are Us project go beyond its “white saviour” focus. Arguably, in a world where Western politicians routinely exploit anti-Islamic sentiments for personal political gain (and are unable/unwilling to pass effective gun control laws) Ardern’s compassionate stance might have been a valid and powerful minor theme in a different sort of narrative. The core problem is that the Christchurch mosque shootings are not a “ feel good” story. The more fundamental story is one of evil developing undetected, and achieving its destructive goal, thereby leaving families and an entire community to cope as best they can with the aftermath. Yet the makers of this film project don’t seem to have anything like that grittier narrative in mind.

Worryingly, there is also nothing in the track record of the creative team involved to inspire confidence that they would be up to the task of telling a complex, essentially tragic kind of story. Once again, Niccol seems intent on biting off more than he can chew. Ultimately, the main audience for this film (if there is one) will be offshore, and not among New Zealanders. The production is in the hands of people – Jamal as well – who seem intent on preaching an uplifting message to the rest of the world, regardless.

Perhaps just as well, the production does have an inbuilt weakness. According to the original Hollywood Reporter story, the film would be shot on New Zealand, presumably using New Zealand film crews and locations. Given the likelihood of local protests and boycotts, that dependency may be the Achilles heel that kills this production. If so, it would be an interesting example of how vulnerable communities are now resisting being used as fodder for mass entertainment – however (lucratively) noble the intentions may have sounded to everyone at the original pitch meeting.

Change Partners
So even after cynically raining down death and destruction on Gaza, this hasn’t been enough for Benjamin Netanyahu to save his job. By a razor-thin margin, the Knesset has just voted to recognise the coalition contraption welded together by Yair Lapid and Naftali Bennett. As has been widely noted, all that this coalition currently shares in common is its desire to put an end to Netanyahu’s 12 year grip on power.

The coalition will rotate the post of PM. Whoever holds the top job, the outcome is unlikely to offer much relief to the Palestinians. Bennett – who will be the first coalition leader to hold the PM post – has campaigned in the past for annexing the entire West Bank. With fingers crossed, the West is hoping that Lapid will be able to keep Bennett in line.

But for now, Anything But Netanyahu does offer some limited cause for celebration. Thre has to be hope for instance, that now Netanyahu is no longer the PM, he can and will be prosecuted for corruption. Also, given the antipathy between Joseph Biden and Netanyahu – the legacy of personal dislike dates from the Obama administration – the US could (theoretically) treat the changeover as an opportunity to reset its policy on Israel. A few months ago, there was talk by the Biden White House about a reset of policy towards the Palestinians. It didn’t amount to much. No surprise there. If anything, Biden has always been closer to the state of Israel than Obama was.

Biden has a long and consistent track record of supporting Israel since his first visit in 1973. He has been a strong proponent of maintaining Israel’s qualitative military edge, even helping to shape Israel’s $38 billion multi-year security package as vice president.

…As both Biden and [US Secretary of State Anthony] Blinken have admitted, progress will be slow toward any two-state solution. Indeed, the Biden administration has said it will let Trump’s decision on the US Embassy in Jerusalem stand; administration members have warmly praised their predecessors’ Abraham Accords — normalizing relations between Israel, the United Arab Emirates and Bahrain; and they have not rolled back Trump’s declaration of Moroccan sovereignty over Western Sahara, essential to normalizing ties between Israel and Morocco.

This can change. Even in 2017, there was similar talk that Donald Trump would reset relations with Israel. And he did. Incredibly, he made US foreign policy even more dependent on Israel and Saudi Arabia than it had been before. Quite literally, Trump let them get away with murder.

Footnote: Talking of murder, this admission a few days ago by former Mossad chief Yossi Cohen confirmed that Israel has been murdering Iran’s scientists (and attacking the facilities for its nuclear energy programme). Presumably, Israel was also responsible a week ago for sinking the largest ship in Iran’s Navy. No doubt, if Iran responds, Teheran will be admonished by Israel and the US for its “ aggression.”

Israel’s immediate goal seems to be to provoke a response from Iran that will torpedo the talks that have been occurring between Iran and the US which have had the aim of reviving (some version of) the anti-nuclear deal that had been negotiated by Obama and Iran outgoing leader Hassan Rouhani. This was the deal that Donald Trump so disastrously scrapped.

All About the Benjamins

Ironic indeed if Netanyahu’s pursuit of the Benjamins (ie. the US $100 bill) is what ends up landing him in court, and (even, we can but hope) behind bars.