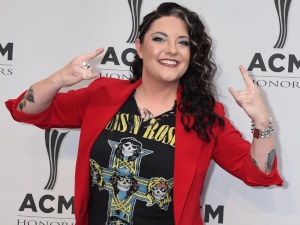 Like no other performer in popular culture, Dolly Parton is loved and respected by people from opposite ends of the political spectrum, and every point in between. Her hits stopped coming a while ago, though. Modern country music is a genre that’s lopsidedly dominated by male artists. It is music made mainly by men, primarily for women listeners. Even the most successful female artists come under intense pressure to foster an image that those women listeners will think men would approve – either by being (a) objects of desire, (b) good old gals who men would feel comfortable around, or (c) passive observers of masculine failings who will still love them, regardless of their wayward ways. They’re just men, right?

On all counts, that makes for a pretty grim outlook. Over the past 10 years, female musicians have comprised a scarce and declining 10% share of the playlists on US country music radio stations – which are still the main gateway to hits, name recognition, lucrative tours and merchandise sales. There are similarly sobering research figures on the gender imbalance in country music here, in the Tennessean newspaper. The 10% level includes all hours. In the high listenership daytime hours, the ratio is even lower. By and large, mainstream country music’s prime allegiance is to flag-waving white men (a) drinking (b) driving and (c) being in pursuit of and/or recovering from some blue-eyed, blonde-haired angel/devil child. And preferably, all three at once.

Back in 2015, US radio consultant Keith Hill infamously described female country artists as the tomatoes in a salad where men comprise the lettuce. Those men would be interchangeable gym-pumped white guys in flannel shirts like Blake Shelton, Morgan Wallen, Luke Combs, Thomas Rhett, Cole Swindell, Luke Bryan, Dierks Bentley, and Sam Hunt. That’s not the New Zealand Sam Hunt. That would be the American Sam Hunt who had the mega-hit “Body Like A Back Road” which likened making love to his gal to driving his pickup truck around those familiar, oh so dangerous curves. Here’s Hill’s argument in its entirety against giving anything like equal airtime to female musicians:

Hill has cautioned against playing too many females. And playing them back to back, he says, is a no-no. “If you want to make ratings in country radio, take females out,” he asserts. “The reason is mainstream country radio generates more quarter hours from female listeners at the rate of 70 to 75%, and women like male artists. I’m basing that not only on music tests from over the years, but more than 300 client radio stations. The expectation is we’re principally a male format with a smaller female component. I’ve got about 40 music databases in front of me, and the percentage of females in the one with the most is 19%. Trust me, I play great female records and we’ve got some right now; they’re just not the lettuce in our salad. The lettuce is Luke Bryan and Blake Shelton, Keith Urban and artists like that. The tomatoes of our salad are the females.

So… That is the long way around of explaining why this week’s Werewolf playlist is comprised of all-female country music that (with a couple of exceptions) has been released in the past five years. Women back to back, one after the other and then another… The content still has a lot on its mind about cheating men, female reputational risk and the good Lord, but the tone has changed quite a bit since Kitty Wells, Tammy Wynette, Patsy Cline, Loretta Lynn, and yes, Dolly Parton, were on the radio and in the charts.

What hasn’t changed is this: there is no place for older women in the country music mainstream. As NPR reported two years ago:

…When female country artists do find mainstream success, they are young. “Not one of the top-performing women[in a UC Southern California survey] was over the age of 40,” they note, “while all but one of country’s top-performing men had reached or exceeded that age.” They found that the average age of top female artists is 29 years old — while for men, the average age is 42.

Years ago, Willie Nelson and Waylon Jennings expanded the boundaries of what mainstream country regarded as acceptable subject matter. Among modern country’s female artists, the same quantum leap was achieved by Kacey Musgrave’s landmark 2013 album Same Trailer, Different Park. That album’s breakout hits “Merry Go Round” and “Follow That Arrow” rewrote the rules for what female country artists could write about, and embody. “ Follow That Arrow” for instance, not only introduced mainstream country to the notion of lesbianism, but also made it sound like an optional no big deal.

By contrast, Tammy Wynette’s self-flagellating 1977 hit “ Womanhood” – written by a man (Bobby Braddock) about a young Christian woman worried about losing her virginity – has been included here to illustrate how much attitudes have changed. Especially when compared to say, a track like Musgrave’s “It Is What It Is” – in which the singer calls her ex for a one-night stand, mainly because neither of them seem to have anything better to do. At the same time, she doesn’t want him to overthink it into meaning something else. There’s a layer of melancholy to the song, for both of them.

Talking of one nighters…IMO, the two tracks by Ashley McBryde (that’s her on the Werewolf cover) are striking examples of the tonal change I’m talking about. McBryde, 37, is a tattooed, been-around straight shooter who writes sharp lyrics. St Vincent’s Annie Clark may have a cooler image, but her lyrics (check out the on the nose lyrics for ” At the Holiday Party “ on St Vincent’s recent Daddy’s Home album ) aren’t in the same league as McBryde. On “One Night Standards” she is on target:

It’s just a room key
You ain’t gotta lie to me
Can’t you just use me like I’m using you?
How it goes is, bar closes
There’s no king bed covered in roses
Just a room without a view….

On “Shut Up, Sheila” McBryde also deals with another country music cliché (the song is about mama/grandma dying) in the same no bullshit fashion. Like, shut up about Jesus because (a) you aren’t that close to this family anyway, and (b) we will grieve in the way we choose.

In most of the songs on this playlist…men tend to be treated as something between a necessary evil and an optional extra. God however, casts a longer shadow. Even on Musgrave’s ” “Merry Go Round” she cites a woman’s attendance/demeanour at church as being just one of the reputational hazards that women commonly face.
I’ve written before about “The Daughters” by Little Big Town, which IMO is possibly the best protest song of the past 10 years, in any genre. US country radio simply couldn’t deal with its quietly blasphemous outrage:“ I’ve heard about God the Son/ and God the Father/I’m just looking for a God for the daughters…” The song found its audience anyway. (On Youtube,“The Daughters” has 3.5 million views and counting.)

What else? Kelsea Ballerini’s “Hole in The Bottle” is an ode to women who drink, and yes, it is probably a misguided attempt to treat alcohol intake as a badge of empowerment, but then again, I’m not her Dad. There is an element of faux badassery to some of the music in question, but Margo Price happens to be the real deal. She’s been a hard luck survivor of rural poverty (the bank foreclosed the family farm) extensive drug use, the death of her child and a stretch in prison. A few years ago, Price found an unlikely escape route, after Jack White chose to champion her self-funded debut album Midwest Farmer’s Daughter. Some of the song titles reflected the album’s autobiographical content: “Desperate and Depressed” “ World’s Greatest Loser” and “Four Years of Chances” which is what she gave to her dumbass partner before checking out.

Other tracks….Now 74, Lacy J. Dalton was always a bit too intense for the country music climate of the early 1980s. (In that respect, she was the female equivalent of Gary Stewart.) Like Stewart, she was also too Nashville though, for the alt-country Americana crowd. “Black Coffee (included here) was her last country hit, back in 1989. Maren Morris’s monster 2020 hit “The Bones” celebrates the foundation blocks of a good relationship. Maddie and Tae’s “Friends Don’t” lists all the unspoken ways we have of recognising the difference between a friendship and the onset of romantic attraction. Conversely, Iris Dement’s classic song deals with the daily grind of a life that’s being lived less than fully. It is what it is.

Finally, and if we’re talking about female country musicians as a discriminated-against category, what about black female country artists? Mickey Guyton has had to fight her way upstream in Nashville country for years, and on “Black Like Me” she tackles prejudice head on. Racism aside, even the pledges by some country music broadcasters to pursue a cis-gendered 50/50 split in programming would still have limitations:

…While a 50/50 pledge is good progress, it stops short of intersectionality. “Calling it 50/50 implies that there are only two genders, when there are more than that,” says Letitia VanSant. “While it comes naturally for white, cis-gendered women to band together and advocate for representation in the face of a male-dominated industry, sometimes we don’t realize who is unintentionally being left out.”

With all of these significant barriers in mind….I hope there’s something on the playlist below that rings a bell for you. Near misses worth checking out include : Kacey Musgrave’s “Slow Burn” Lacy Dalton’s “Adios and Run” Iris Dement’s version of Merle Haggard’s “Big City” Ashley McBryde’s “ A Little Dive Bar in Dahlonega…”